Just a few days ago I was visiting the Emilia Romagna area in Italy. Perhaps, by this name, you don’t know where I’ve been, but surely, you know if I tell you names like Bologna, Parma or Modena.

I’ve  heard a lot about this region and, all great things, but it is true that, until you don’t come here, you really don’t appreciate its charming and its essence.

European capital of Culture in 2000, declared by UNESCO “creative city of music” in 2006 and, its porticoes are, today, candidates to be declared World Heritage by UNESCO.

Bologna is one of those cities where you have to go to get impregnated with it, to marvel with every corner, with that unique atmosphere, with its hustle, its colours, its food and its people!

What are you waiting for?

Here I will let you know 11 curiosities of Bologna you should know before going.

The Emilia Romagna region, located northeast of Italy, is one of the 20 regions of Italy and its capital is Bologna.

11 curiosities of Bologna that you should know before going

Its University is the oldest

The University of Bologna is the oldest in the World since it was created in 1088. Then, the Universities of Oxford, Paris or Salamanca in Spain, were created following the model of Bologna.

In fact, the city has 29 Colleges, of which the oldest in the World and still in operation, is the Royal College of Spain, from the mid-fourteenth century.

Nowadays,  Bologna has 85,000 students so you can imagine there is an amazing student atmosphere!

Most students move around Bologna by bicycle so there is a daily bustle of bicycles everywhere in the city.

In fact, if I have to think of a typical image of Bologna, it would be its coloured porticoes with parked bicycles.

Bologna is full of porticoes

One of the amazing things in this city is its porticoes. With nothing less than 40 kilometers of porches, Bologna is a unique city in the World.

In fact, these porticoes arose in the Middle Ages to face the increase of the population in Bologna, partly due to the arrival of so many students.

The word derives from “sporto” or “arcade” in Spanish. Before, they were made of wood but eventually they were built of stone.

Bologna today has the longest portico in the World, with more than 3 and a half kilometres.

One of the most beautiful ones in the city is in the Banca d’Italia building, between Via Garibaldi and Via Farini streets. The entire ceiling is handmade painted.

It is known in three different ways

Bologna is known as the dotta, the rossa and the grassa. The Dotta for its University. The Rossa for the color of its buildings and for its communist past, and Grassa for how well you can eat in this city.

Its streets are full of colorful buildings

I was very surprised at how colorful Bologna is. All the buildings are painted in orange, red or yellow tones.

In Piazza Maggiore, in the “Palazzo de la Podestá”, just behind where the Tourist Office is located,  there is an intersection with 4 columns where the walls are said to whisper.

Apparently, the acoustics are so good that if you are with someone and you both are diagonally in opposite columns and whisper something to the wall, the other person can hear it perfectly.

It has a medieval old town

Bologna has the second largest medieval old town in Europe, after Venice.

It has Water Canals

Did you know that Bologna formerly had Channels like Venice? Nowadays most of them are covered by buildings and you can only see some glimpse of them in certain streets known for it as “Little Venice”.

There is a specific street that has a door from which you can see one of them.

Apparently, during the Middle Ages, people used canals as a means of transporting products like silk among others, but also people and use it as a means of energy to move mills and produce flour.

In fact, one of the canals that still exist in the city is known as the Canal del Molino or Mill Water Canal ,due to the existence of mills in the vicinity that used the water. 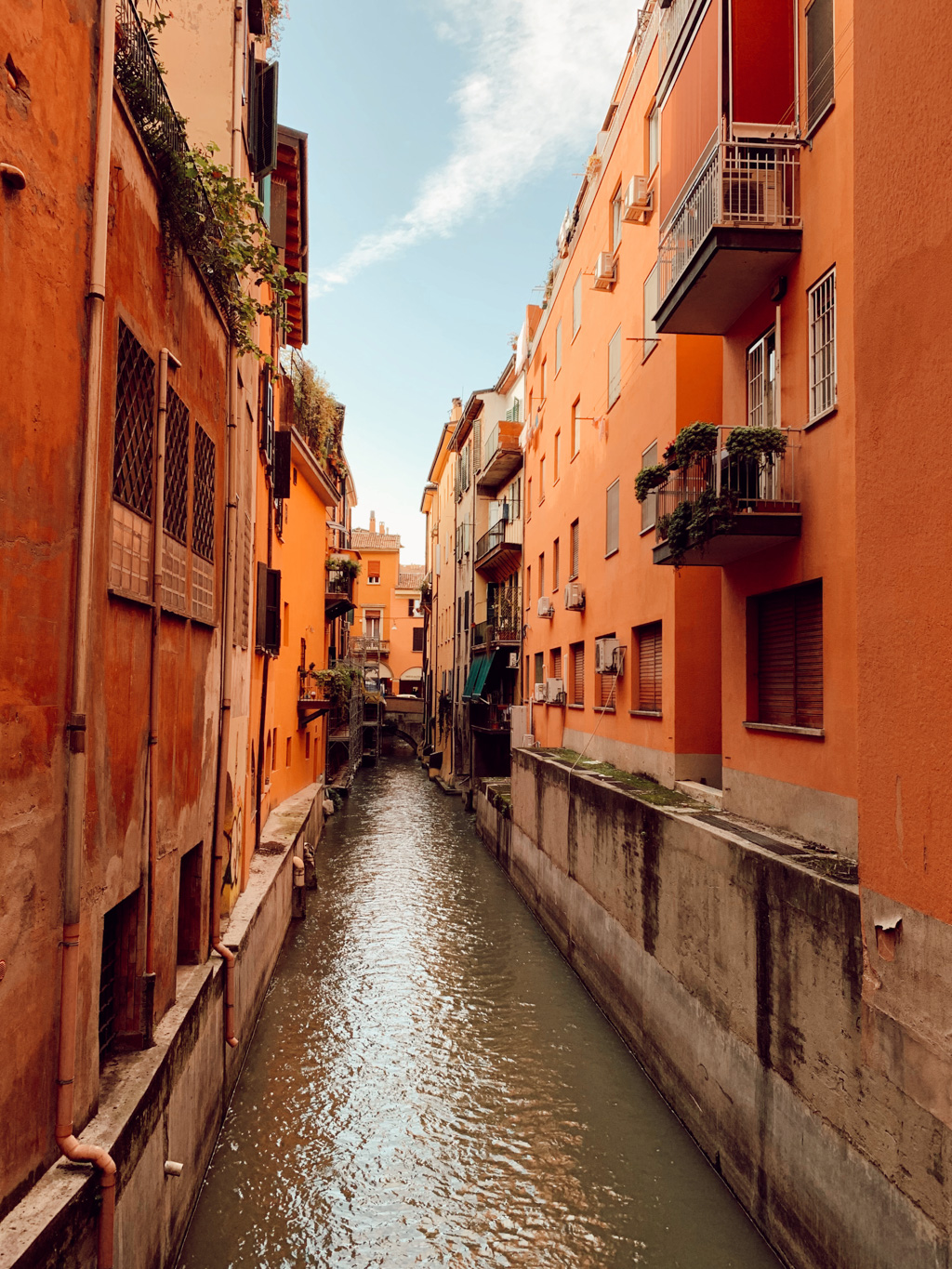 People from Bologna enjoy the “aperitivo”.

Not only in Milan and in Rome is famous the “aperitivo” but in Bologna is also a widespread tradition, maybe partly thanks to all the students.

From 5-6 pm, the bars nd cafes, begin to prepare the “aperitivo time”.

The Aperitivo is, when you order a drink, it includes a series of food, for free, only paying for the drink. It doesn’t substitute dinner time but something previous to dinner.

There is a lot of food and very varied!

Normally, Italians after the “aperitivo”, they head to dinner. I don’t know how Italians can eat that much!

For “the aperitivo” in Bologna I totally recommend:

It is a paradise for food lovers.

Bologna, as I have already told you, is known as “la Grassa” or “the fat” and could not be otherwise.

You can not leave before trying the Mortadella here, which has nothing to do with what we know. Here, in Bologna, the Mortadella is delicious. Also, Parmesan cheese, typical of nearby Parma, tortellini, “Acetto di Modena”, from nearby Modena, or its famous “tagliatelle al ragú”, which we know abroad as Spaghetti Bolognese. However, here you can not order this, if you don’t want they laugh at you.

Formerly Bologna had 180 towers because there was a kind of competition among wealthy families in the area for having the highest tower. Therefore, these were once a symbol of wealth, power and social status.

Anyway, today there are only twenty of which two are the Asinelli and Garisenda towers that are the symbol of the city.

There is a legend that says that if the students want to approve the course, they cannot pass between the two towers. Other says that they should not go up to the Asinelli Tower.

Either way, students need to stay away from the Towers, unless they want to stay longer in this lovely city, which I would totally understand why.

There is a representation of Mohammed in Hell

Inside Saint Petronius in Piazza Maggiore, the Bolognini Chapel stands out, on the left side it is the most richly decorated and in Gothic style.

Its walls are frescoed by Giovanni de Modena and highlights the representation of Dante’s Hell depicting Lucifer grabbing the prophet Mohammed / Muhammad lying down. We know it’s him because there is an inscription below that says “Maohmet”.

Due to this fact, you will be able to see a police van 24 hours outside Saint Petronius, for security reasons, for possible attacks on this building.

It has a lot of “Street Art”

The city has several murals and a very interesting hipster atmosphere. 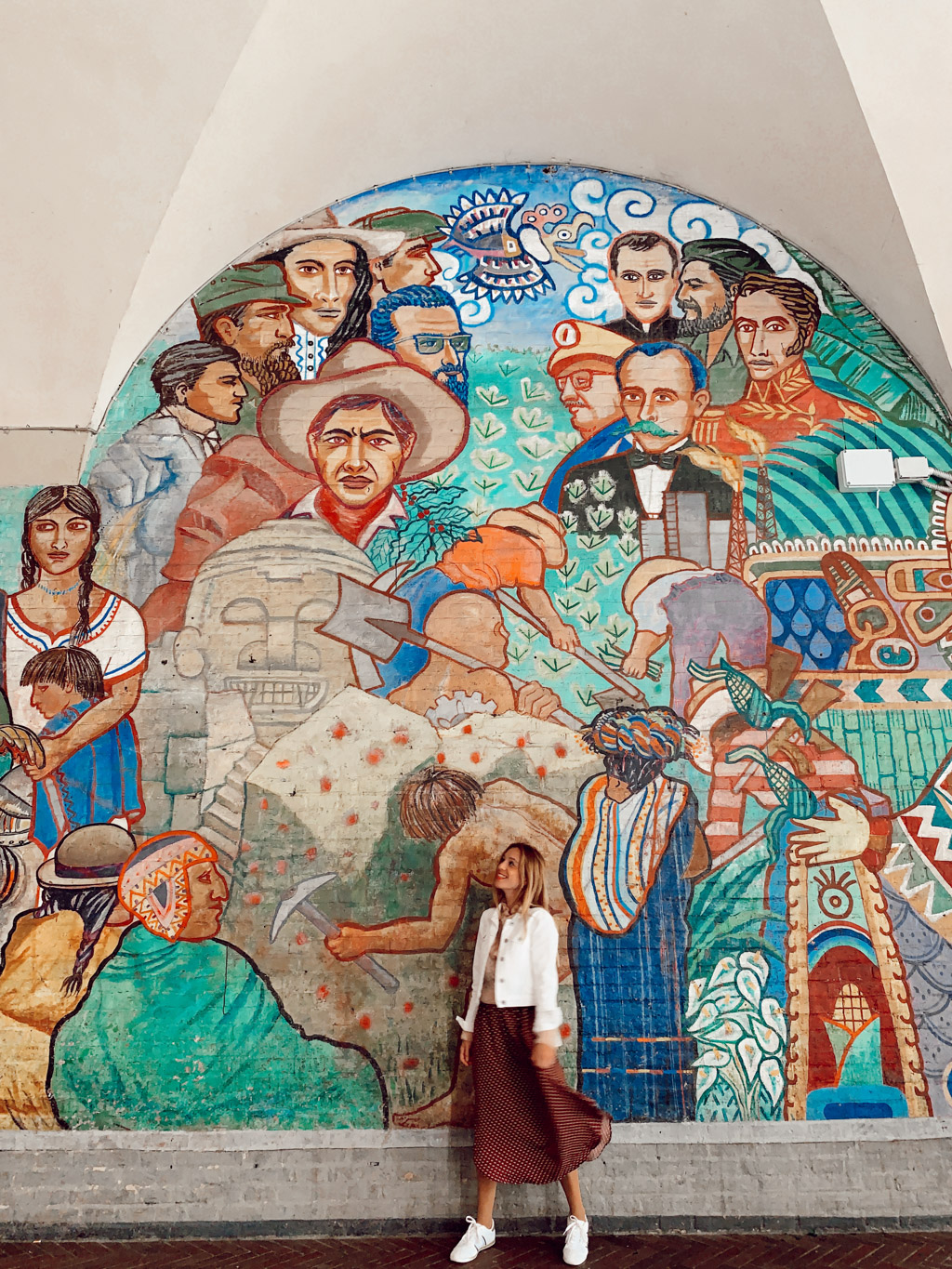 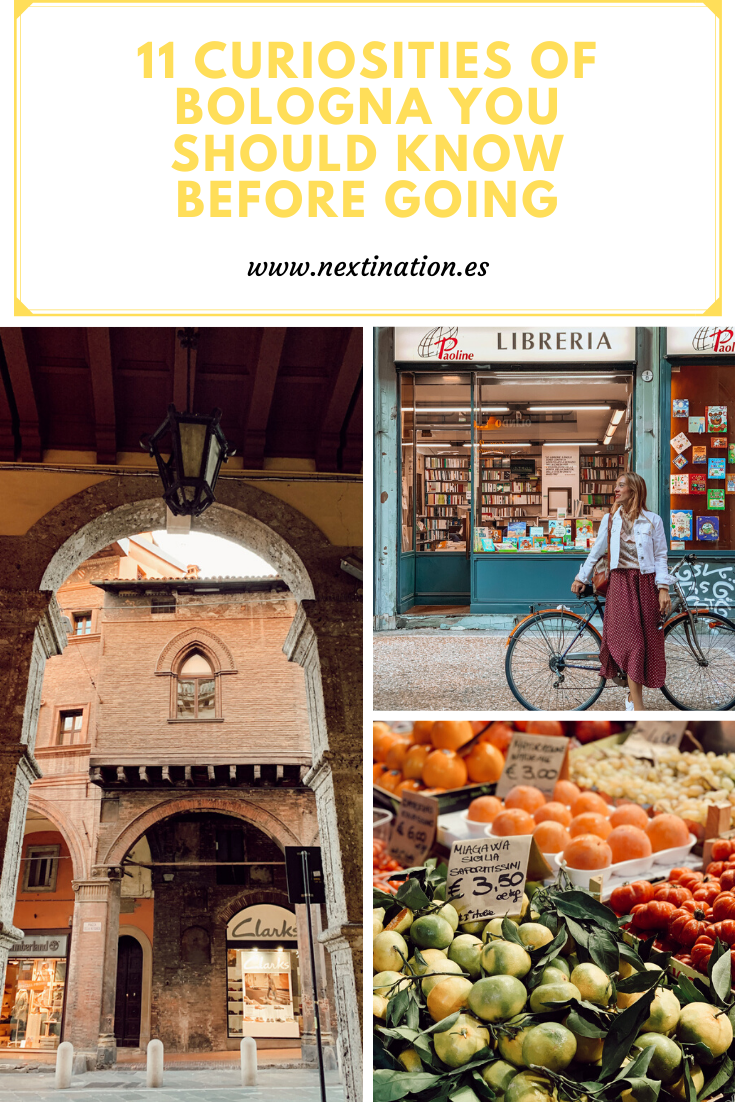 Route around Tuscany in 5 days