If you are going to travel to Singapore, and you are looking for something different, then you cannot miss these 11 hidden places.

But do not worry, because if it is your first time in the city and you want to see the most iconic spots, you can also find more posts about what to do in Singapore. Read below. 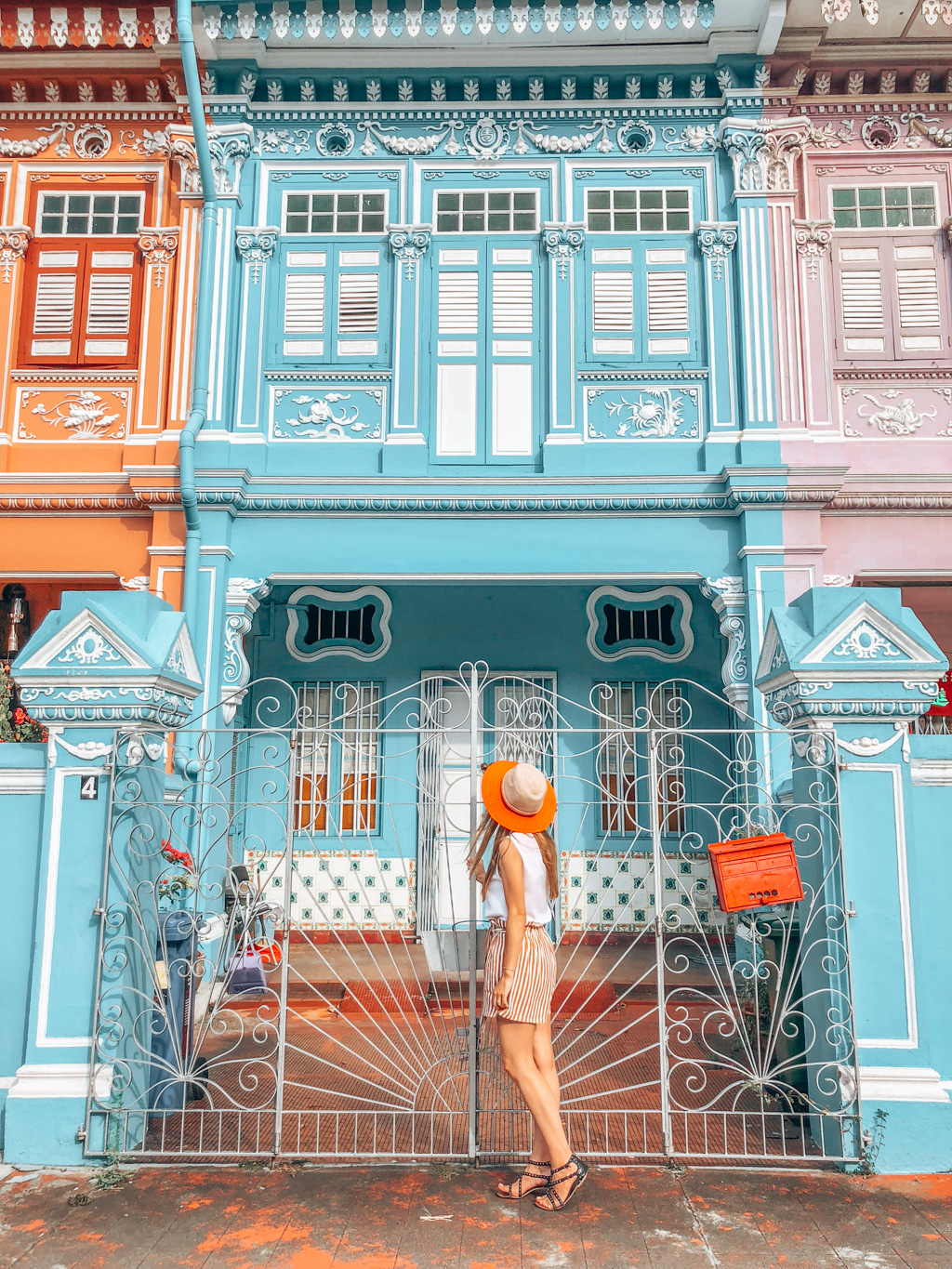 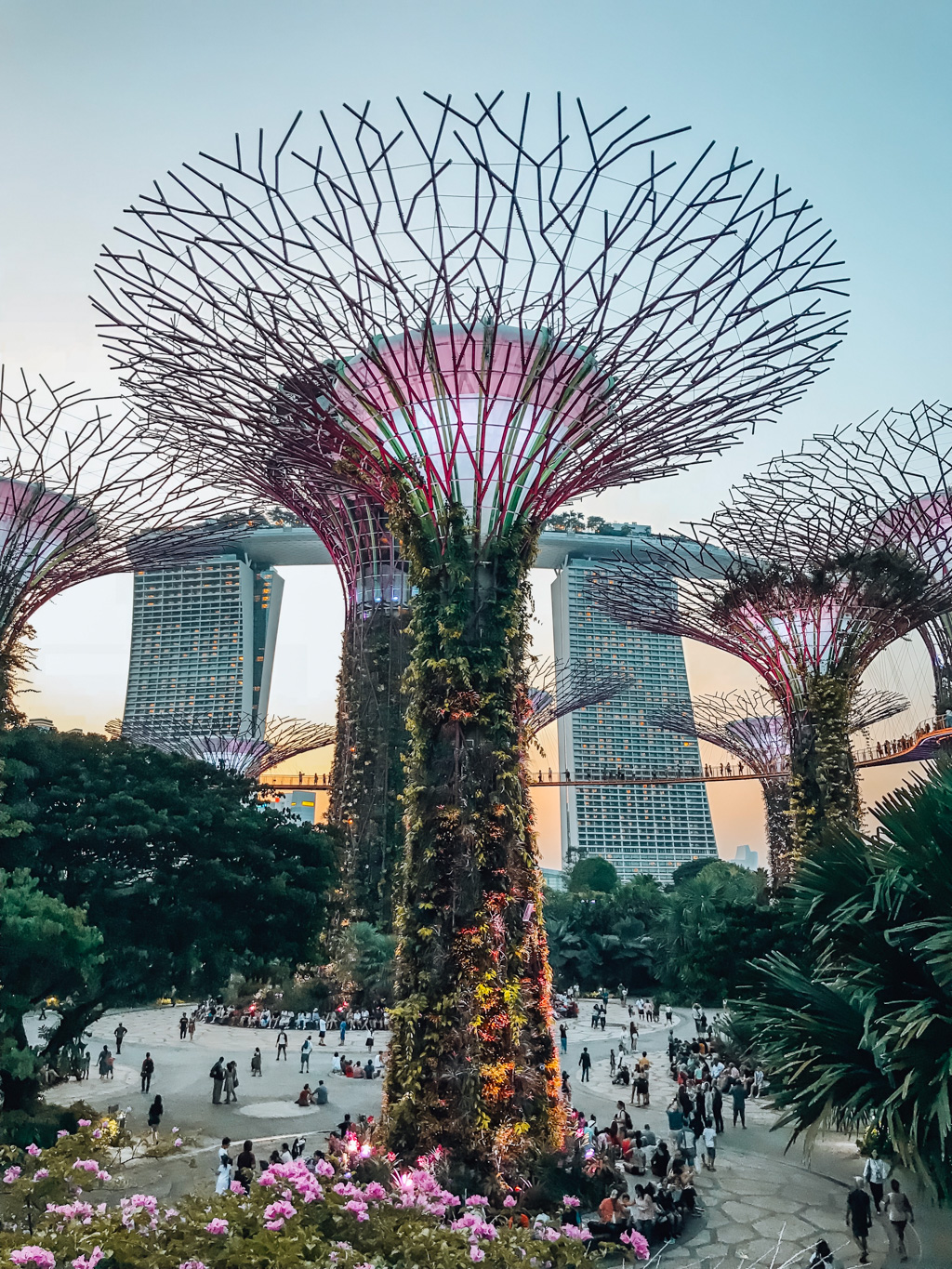 The best Instagram spots in Singapore
Singapore is one of the most "Instragramable" cities in the world. Follow me to show you my favourite and secret spots for your pictures of the city! :))

Ok, now, let’s find out which are the 11 hidden places that you cannot miss in Singapore.

One of the most unique places in Singapore without a doubt.

This park full of Buddhist statues was built to teach children, years ago, with lessons about good morals, good behaviours and show them the consequences of their bad actions if they did not take the right path. This is, therefore, an educational and graphic journey.

A mixture of Buddhism, Taoism and Confucianism that constitute, in short, the traditions of Chinese philosophy: legends, spirituality and morality also referring to the history of Singapore.

This park is much bigger than I thought at first. It houses a total of 1000 statues and 150 dioramas. You can even see a Buddhist version of hell depicted here, called “Ten Courts of Hell.”

This place was created in 1937 by the creators of the “Tiger Balm”, a very famous ointment in China, which literally serves to relieve all kinds of ailments. There is no Chinese who has not heard of the Tiger Balm. I remember have bought it several times when I was living in China. 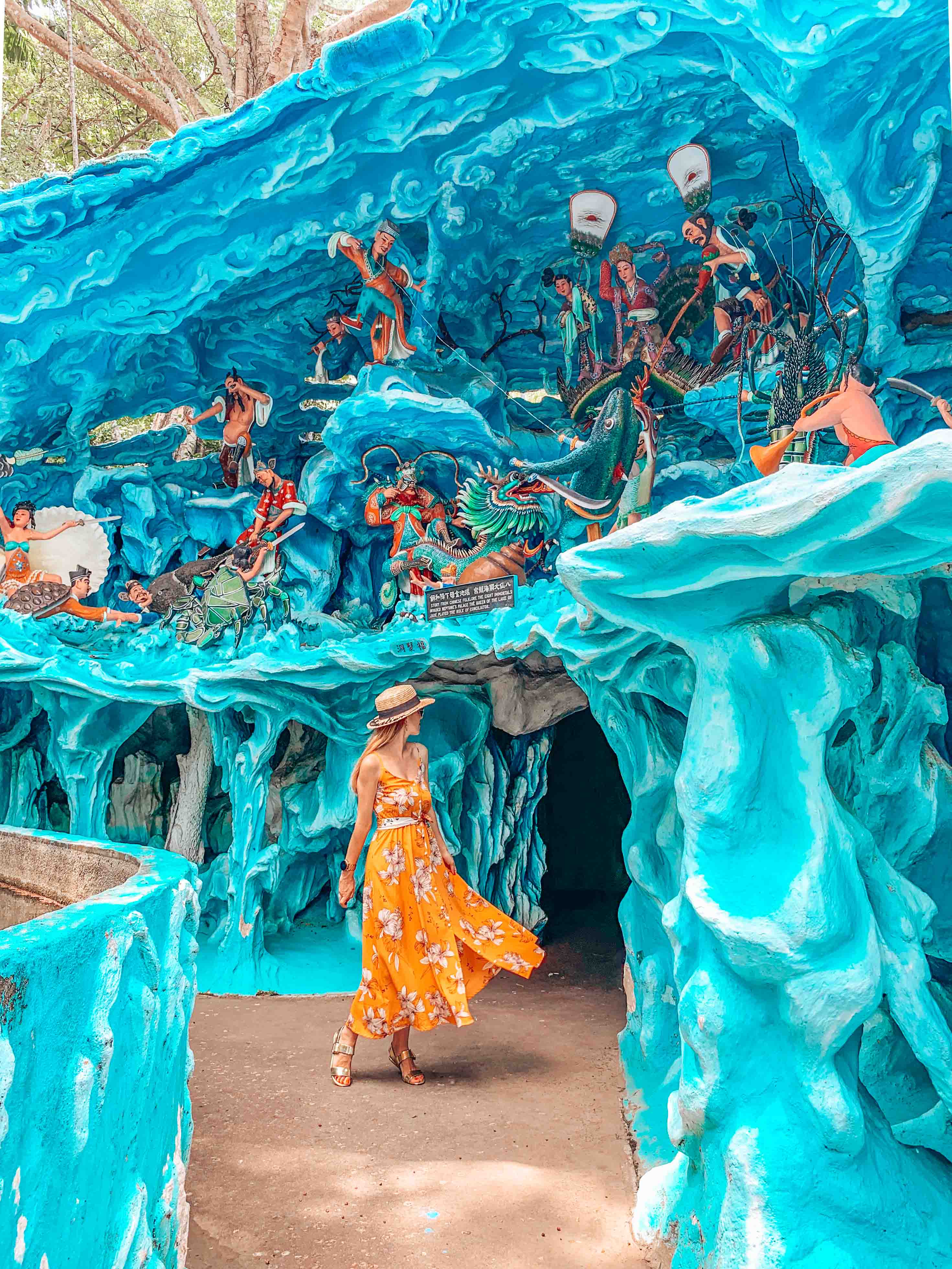 This Monastery located in the north of Singapore, but only a short taxi ride away, is truly worth it.

Also here, I was surprised that this Monastery is much bigger and nicer than I imagined.

The creation of this Monastery is due to a mystical dream that had a successful Chinese merchant, who made his fortune in Singapore. The Temple was built in the traditional Hokkien style, typical of the Fujian area, in southern China but also in Taiwan and Singapore.

This style is characterised by an elaborate decoration of frescoes and mosaics, with a special technique that is like “cut and paste”. Colourful ceramics were carefully cut into mosaic-size pieces and then, pasted to create beautiful reliefs, especially on the ceiling as “carved porcelain”. This style has also the roofs with curved corners up, usually crowned by dragons.

Highlights the seven-story pagoda topped in gold as well as the three main buildings separated by two courtyards.

It was listed as a National Monument in 1980 and then a decade-long restoration was carried out.

This temple located very close to the Lian Shan Shuang Lin Buddhist Monastery is the only Burmese Buddhist temple in Singapore. You can approach it before or after your visit to the Monastery.

It houses the largest marble statue of white Buddha outside Myanmar.

If you feel like spending a different day in Singapore, then I recommend you going to Gillman Barracks.

It is home to the main international and local galleries since 2012, becoming the Enclave of Contemporary Art in Singapore. It is located in what was an old military quarter in 1936, built especially for the British battalion before World War II and surrounded by lush vegetation and the colonial architecture of the Barracks.

Gillman Barracks is the perfect plan to spend a day away from the hustle and bustle of Singapore, learning about art thanks to established artists there and also emerging artists. You can find several cafes and restaurants and a live music bar where local musicians play.

There is an event called “Art After Dark” , held twice a month that takes place on Friday nights. New shows are launched in this event, opening hours are extended until very late and there are events related to art as well as musical performances.

It is a shrine in Singapore built by Muslims from South India in 1830. It has a mixture of classical and Indian Muslim motifs. It was built in honor of a holy man from South India who helped spread the Islam in India.

The architecture of the building is very curious. It looks like a multi-storey and pink wedding cake. In 1974 it was declared a National Monument. It is a replica of the sanctuary of India that houses the remains of the saint.

Today it is a Muslim Heritage Center of India and shows the culture and heritage of the Muslims of India and offers an educational experience and describes the rich culture of Indian Muslims in the region. 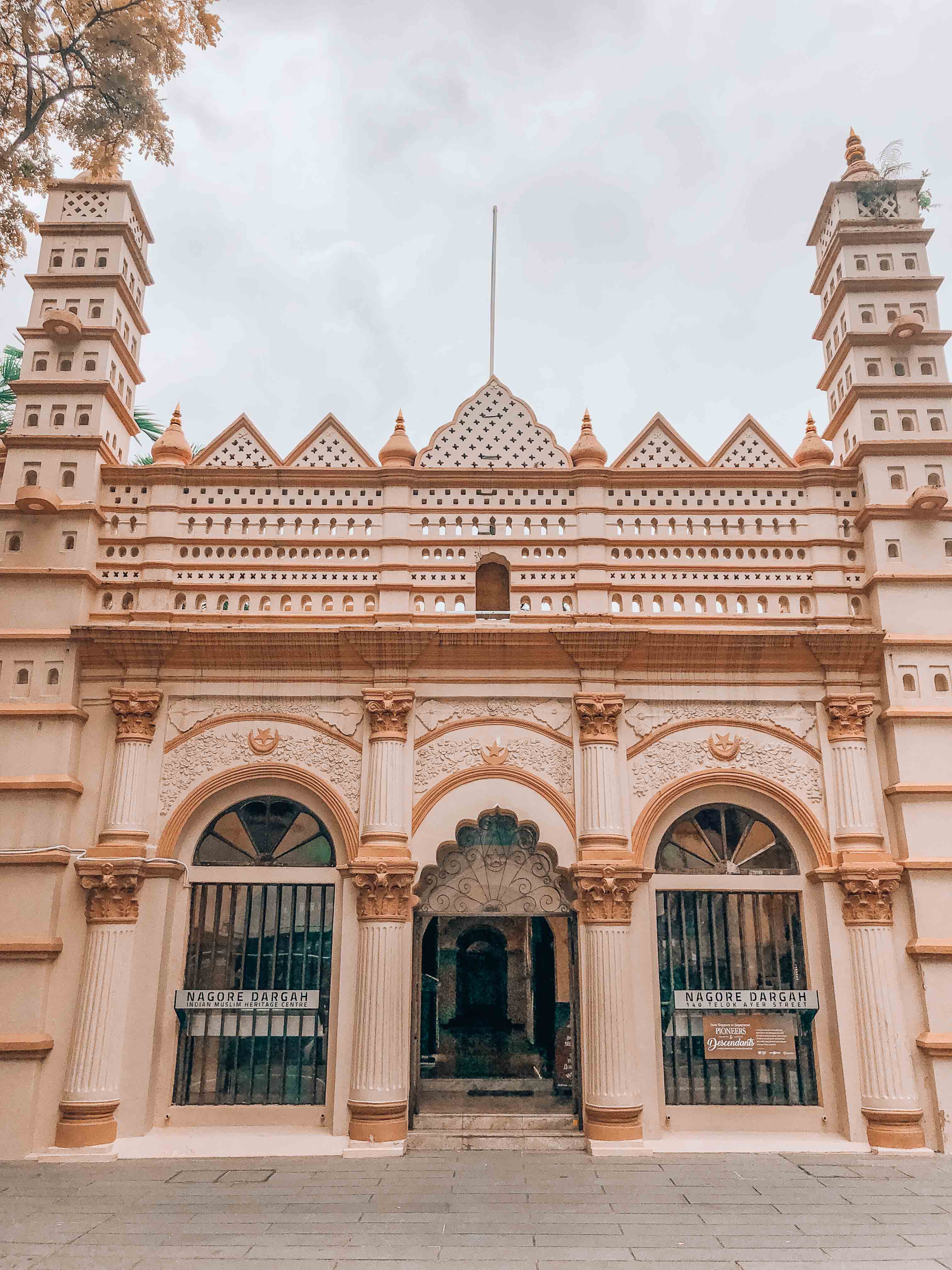 If you are a fan of architecture, you should visit this building. The WOHA architecture studio together with the Patricia Urquiola Spanish Architecture Studio were responsible for building and designing this “tropical tower” in the Central Business District of Singapore -CBD in English-

This green tower is full of vegetation creating a vertical garden of 190 meters and four terraces, each ones treated as an urban gallery, which also allows air to circulate through the building in a natural way.

WOHA designed a red aluminum mesh around the building that allowed the integration of 21 species of vines, plants and flowers. To these 21 species were added another 33 species of plants and trees which makes a total of 54. Thus, biodiversity is introduced in the area of ​​the city attracting birds and compensated for the lack of green in the surrounding architecture.

The design of the gardens is due to the work of the Spanish architect designer Patricia Urquiola, responsible for all interiors as well as the hotel’s outdoor spaces.

It is the only red skyscraper in Singapore, built to stand out in the skuyline of Singapore and becoming an urban and visibly recognizable landmark for tourists and locals. 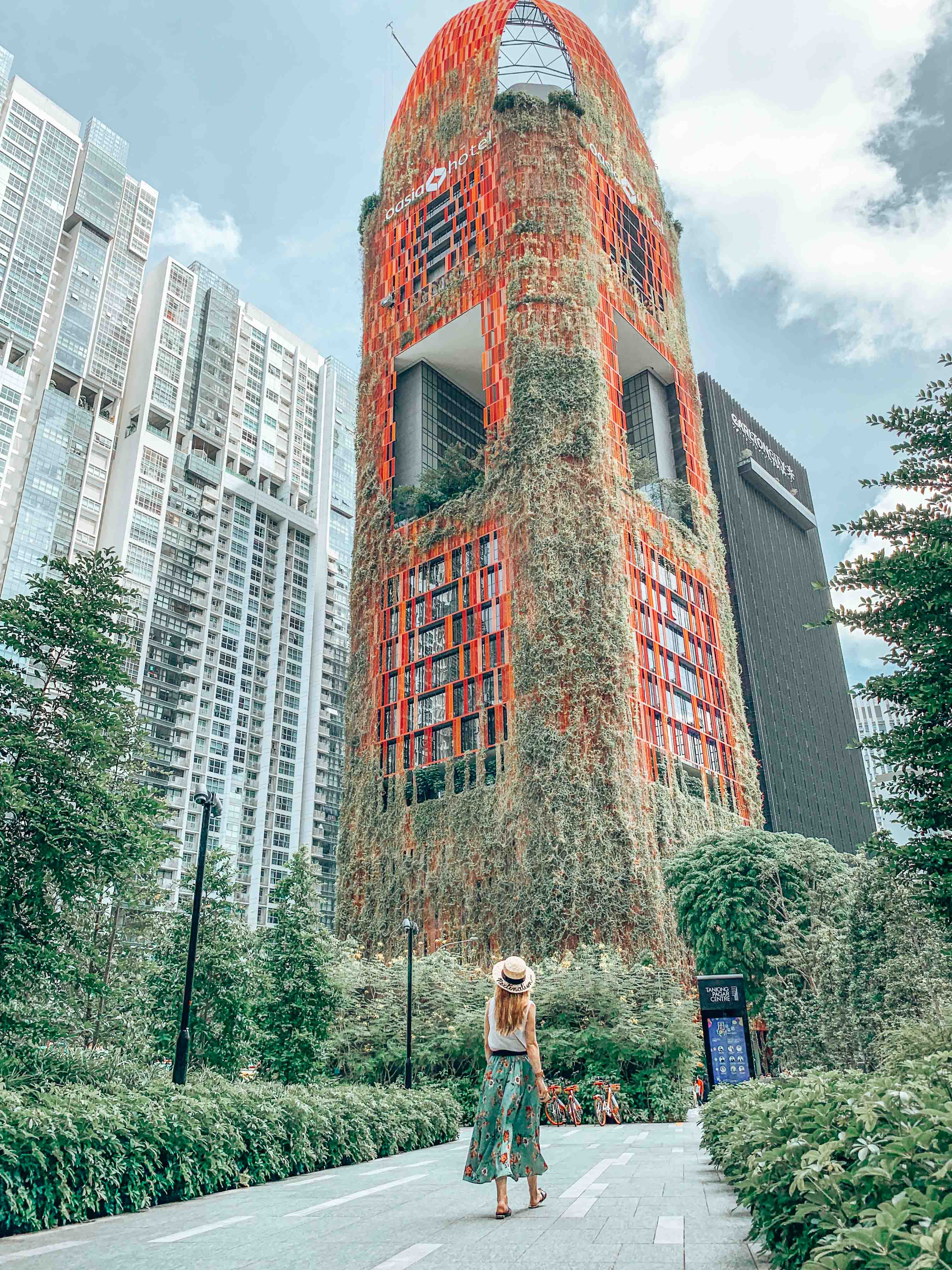 These seven towers with 50 connected floors are the tallest residential buildings in the world. This complex called “Pinnacle Duxton” is located very close to the Oasia Hotel and next to the business district. The project has two of the largest elevated gardens in the world, with at least 500 meters each.

The gallery / viewpoint on the 52nd floor offers special events. It has another gallery or skybridge on the 26th floor.

It is open to the public and opens from 9.00-21.00 every day. There is a quota of 200 people per day and it costs 6 Singapore dollars. Once there, you must locate the MA office on level 1, and there, the staff will give you a card with which you can take the elevator to the 50th floor. With the card you will have access to the skybridge. It is one card per person. To exit, it is the same process. More info here. 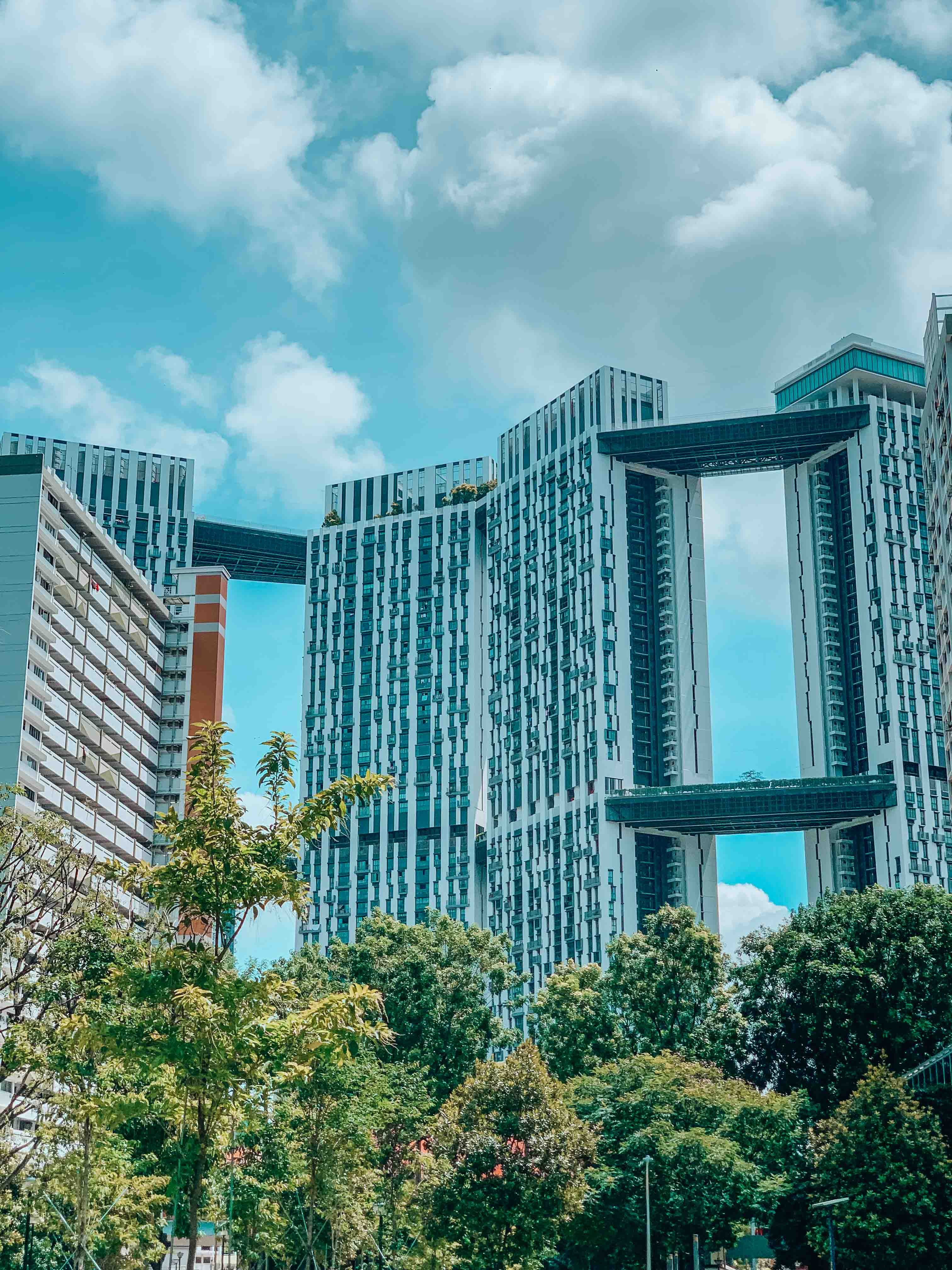 The highlight of this hotel is its majestic Atrium that rises to the top of the hotel and is flooded with natural light.

Designed by John Portman in 1987, this atrium is one of the largest in Southeast Asia and resembles the bow of a ship. Each of the 57 rooms is accessed from the balconies that overlook the atrium. The atrium effect is cinematic, like science fiction, so prepare your camera and action!

9. Atrium and Lobby of the Pan Pacific Hotel

Again, if you are a fan of architecture, the atrium of this hotel will drive you crazy. Its design is incredible. Both the views from the top floor and from the bottom are equally good. Of course, I recommend you going up or down one of the elevators that does not overlook the lobby, since you will see a beautiful view of Singapore from there.

Maybe you like this atrium just like the Mandarin Oriental one, since it has been built by the same architect, John Portman and also dates from the 80s.

In the Lobby, you will see the giant lamps that seem to float in space. They try to resemble those “lanterns” that goes up to the sky during several festivals in the world, driven by flames.

These lamps in the form of “Lanterns” and their seats float on water thanks to a walkway and wooden bridges.

Again, the WOHA architecture studio is responsible for this building that once again integrates nature into architecture and the urban landscape.

This architecture studio advocates and defends a “green city” so it designed this hotel-garden with huge and curvy gardens covered with tropical plants. 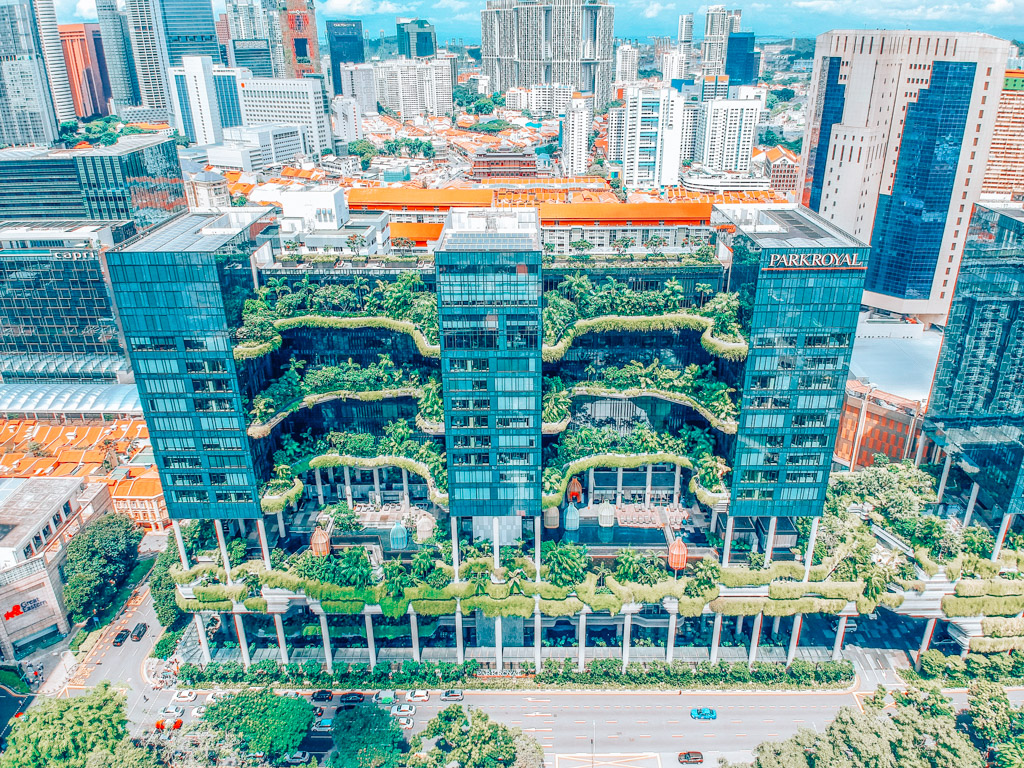 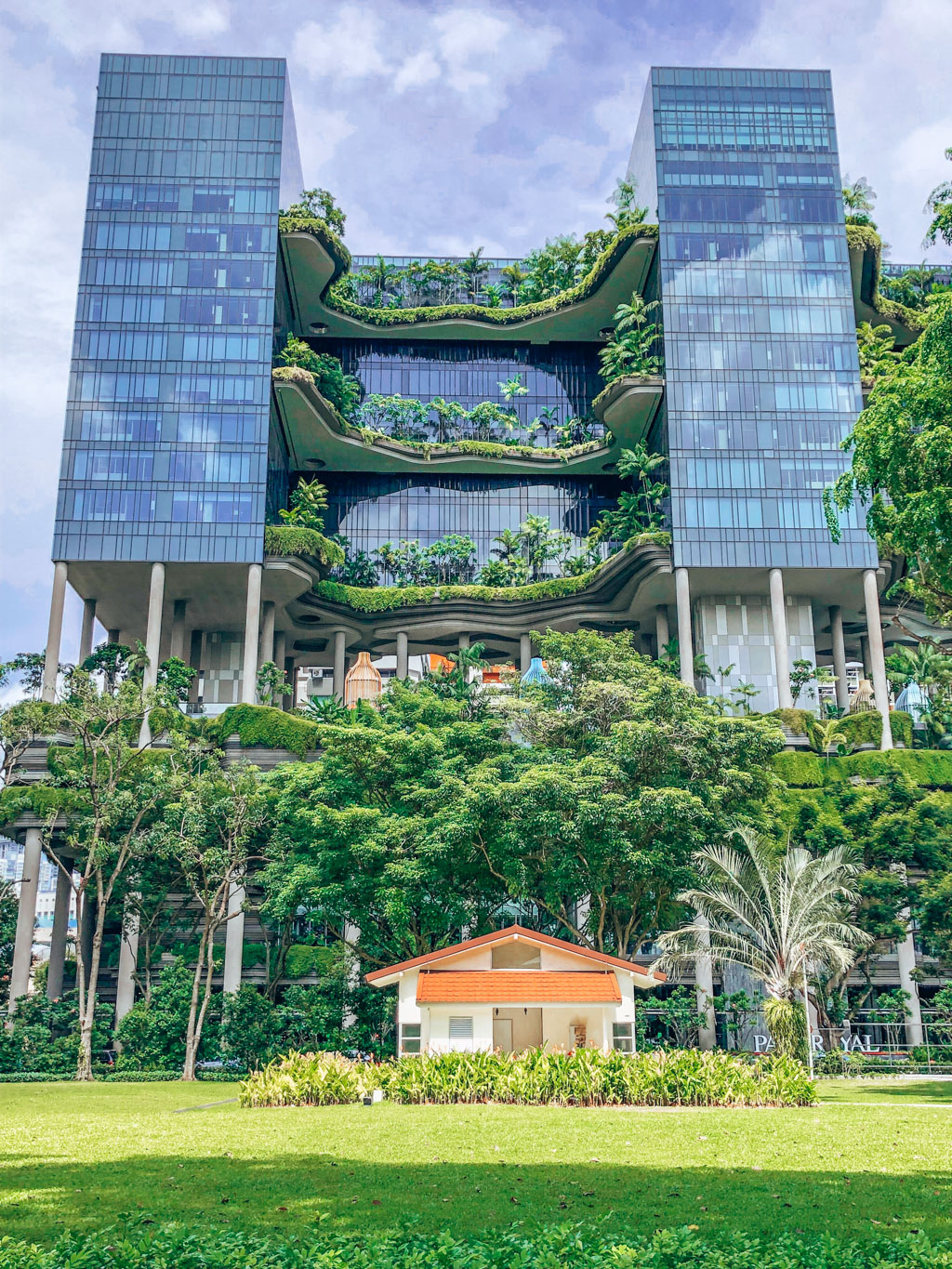 This Fountain in Singapore, located at Suntec City Mall, appeared in the Guinness Book of Records in 1998 as the world’s largest fountain.

During certain periods of the day the fountain shuts down and invites visitors to walk among its jets of water and arrive at a small fountain in the middle where it says what you need to do here in order to have “good luck”. It is claimed that visitors who walk around the fountain three times touching the water at all times will have good luck.

At night it is illuminated with different lights and with messages and live dedications between 20.00 and 21.00 every day.

The bronze ring is designed based on the Hindu mandala which means universe and is a symbolic representation of the unity of the spirit and symbolizes the equality and harmony of all races and religions in Singapore.

Water in Chinese culture is known as a symbol of life and wealth and the internal movement of water symbolizes the retention of wealth for Singapore.

According to feng shui, the water that flows inland represents the wealth that spills from there the name of the source. 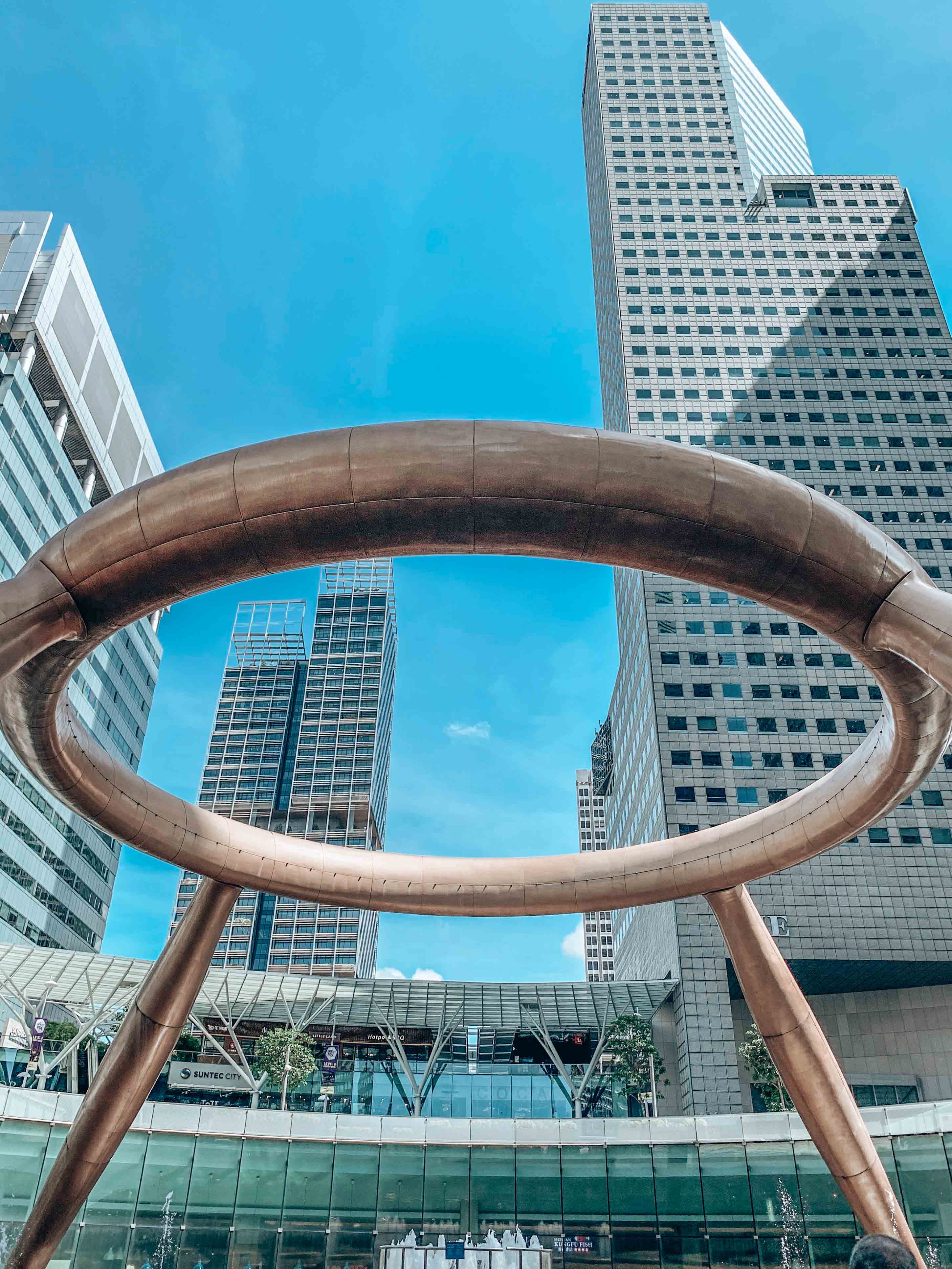 I hope you have found this post about the “11 hidden places you cannot miss in Singapore” useful.

Did you know these places If you know more, please let me know in comments, so that, together we can expand the list. 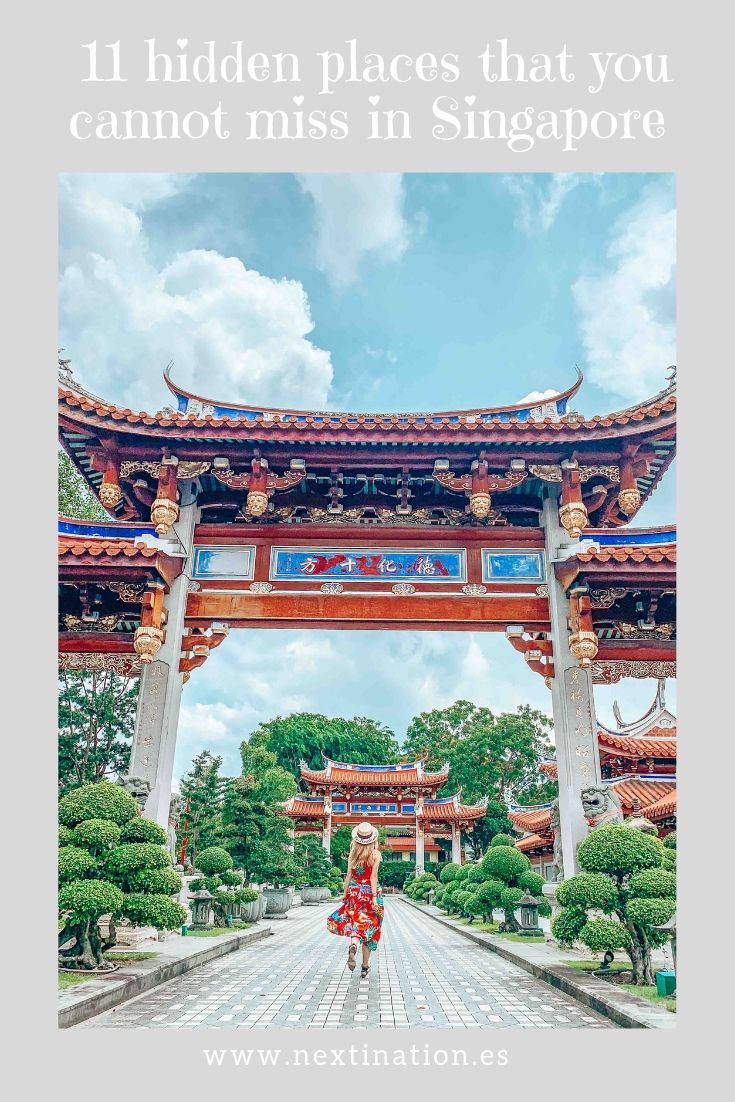 What to see in Kuala Lumpur in 72 hours Part 1