36 Hours in Helsinki: What to see and do

I always wanted to go to Helsinki, since I was a little kid. I remember having a travel book when I was about 9 – 10 years (maybe thanks to that I became in a travel blogger? Who Knows?) and it was about the Capitals of Europe and I remember a photo of the Lutheran Cathedral  of Helsinki, all covered by the snow.

I remember that I saw that photo in particular and imagined myself going there. It is curious how I wasn´t attracted at all by the other cities in Europe.

Neither London or Paris.  It was Helsinki, and that Cathedral with all the snow. That is why I was the happiest person when I bought the tickets to Helsinki!.

It was the first place I visited, as it could not be otherwise. We arrived to Helsinki the previous night and it was snowing a lot so the next morning we woke up and everything was covered by snow. It was just beautiful!

He was who gave autonomy to Finland, gave its own currency and raised the Finnish language to the level of National language.

The Lutheran Cathedral is the most iconic building in Helsinki. It stands in the Senate Square with its neo-classical style, its Colonnade with its pediment and is green dome. 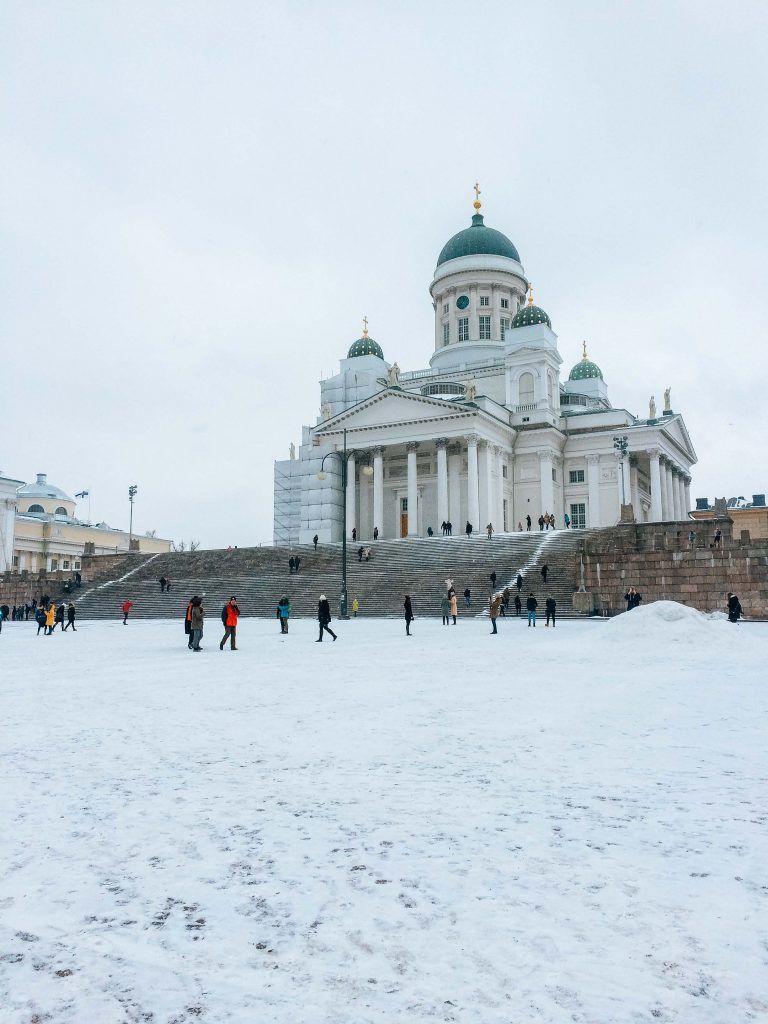 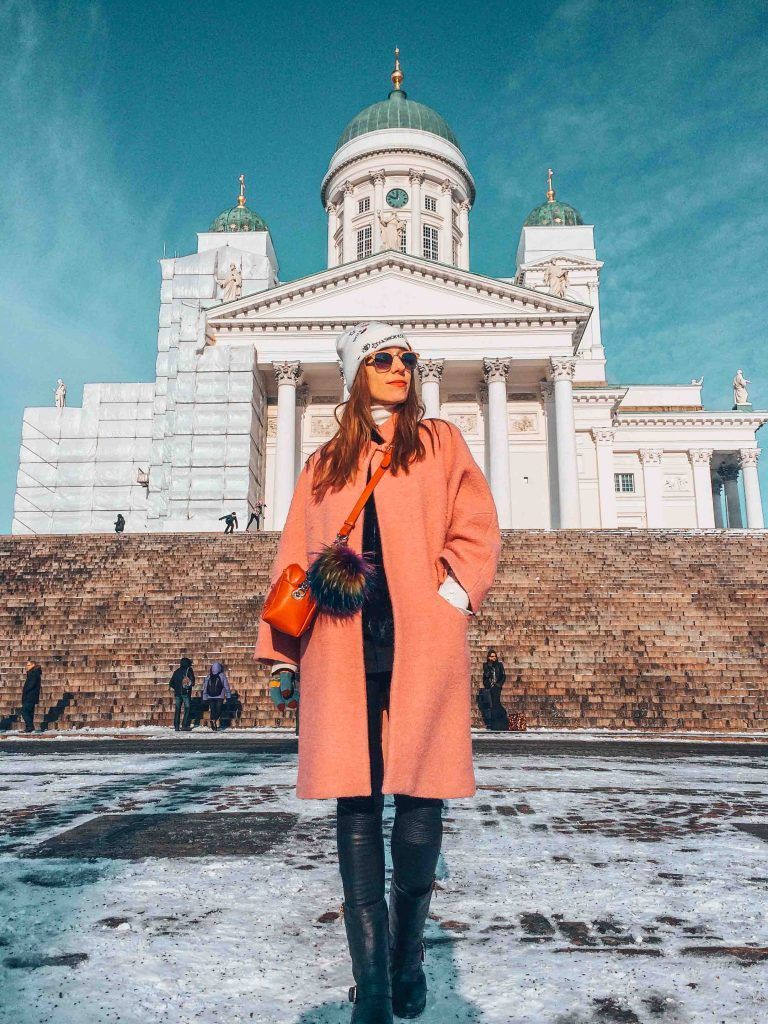 It’s a fountain with the sculpture of a naked woman that looks like to be a mermaid rising above the water and with four fish at her feet throwing water and four sea lions at each corner. It symbolizes the rebirth of Helsinki. The sculptor, called Vallgren simply called it “Merenneito” which means “Siren” and has been called wiht so many different names. The current one is “Havis Amanda”. 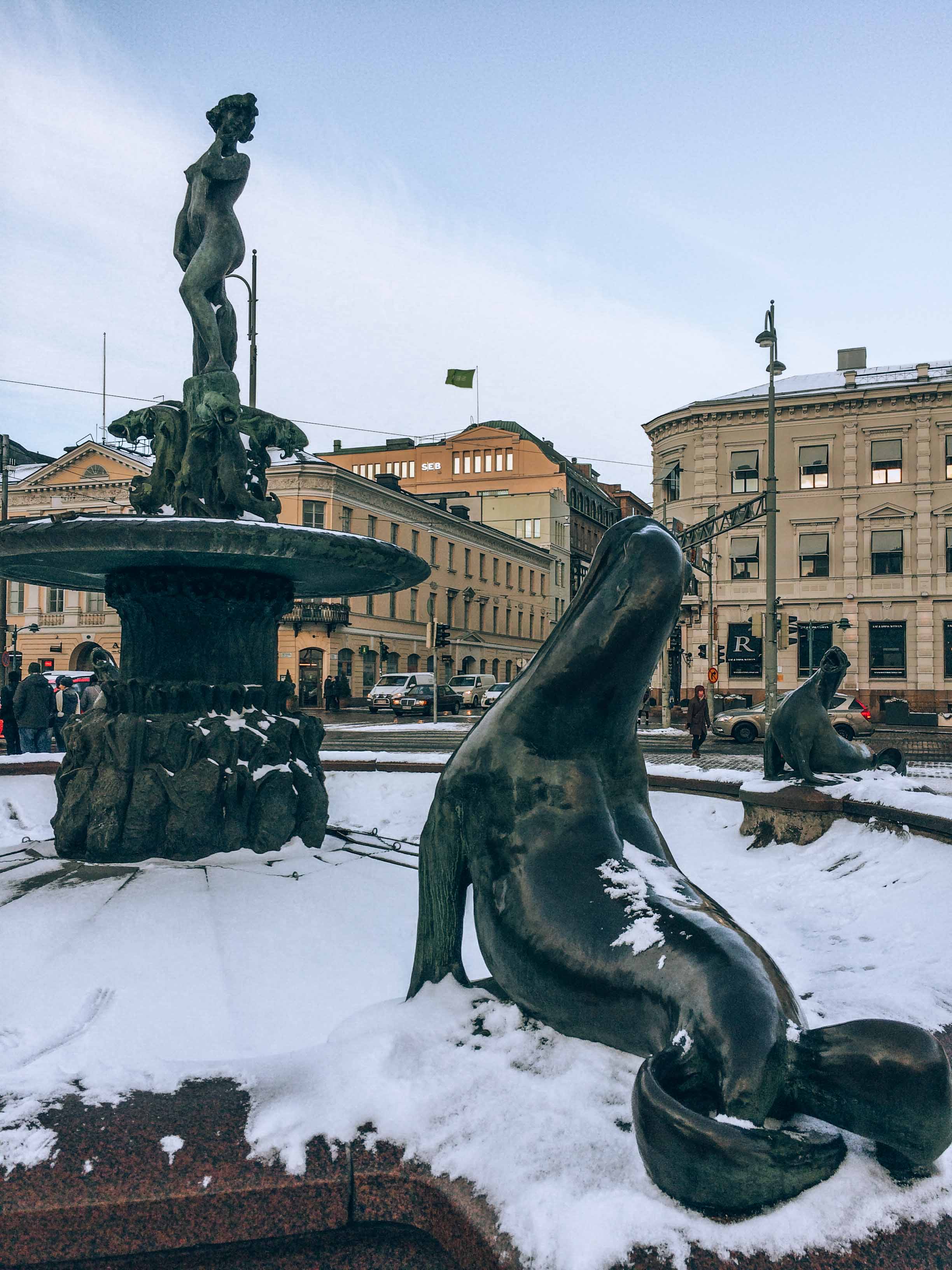 It is located in the center of the city where the City Hall of Helsinki is, located in one of the sides and the Baltic Sea in another. In fact, from here is the depart of some of the Tour boat companies. If you visit Helsinki with good weather, from April or May, this square is full of people, food stands and plenty of terraces where you can eat or take a coffee or beer with great views of the sea and all the boats. 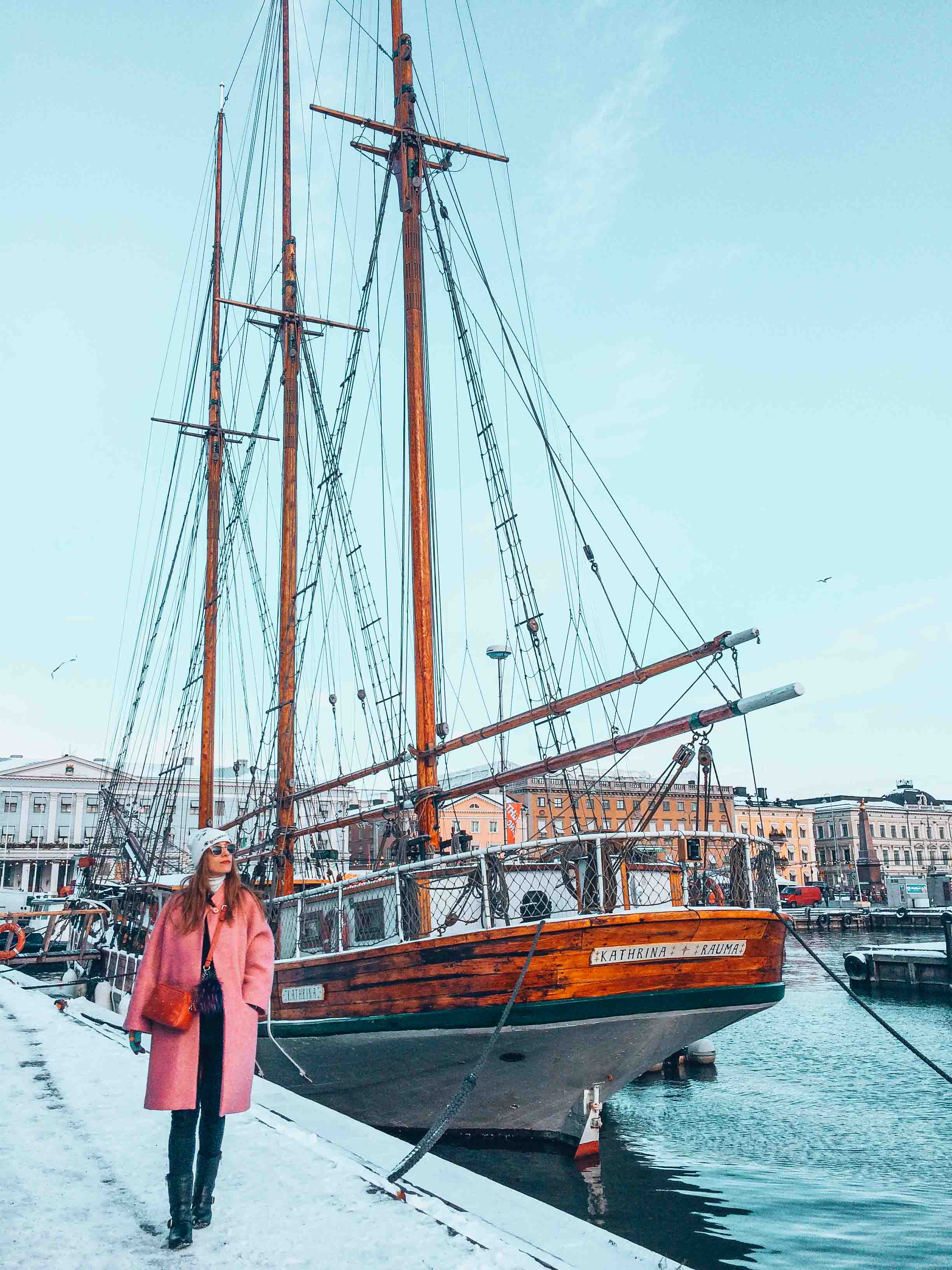 This street connects Katajanokka neighborhood with the Stockmann galleries. It is the most famous commercial street in Helsinki. There, you will find all the shops and brands. It got my attention that this street has a heating system on the ground so, even the rest of the city has a lot of snow, here you won´t find any snow at all. 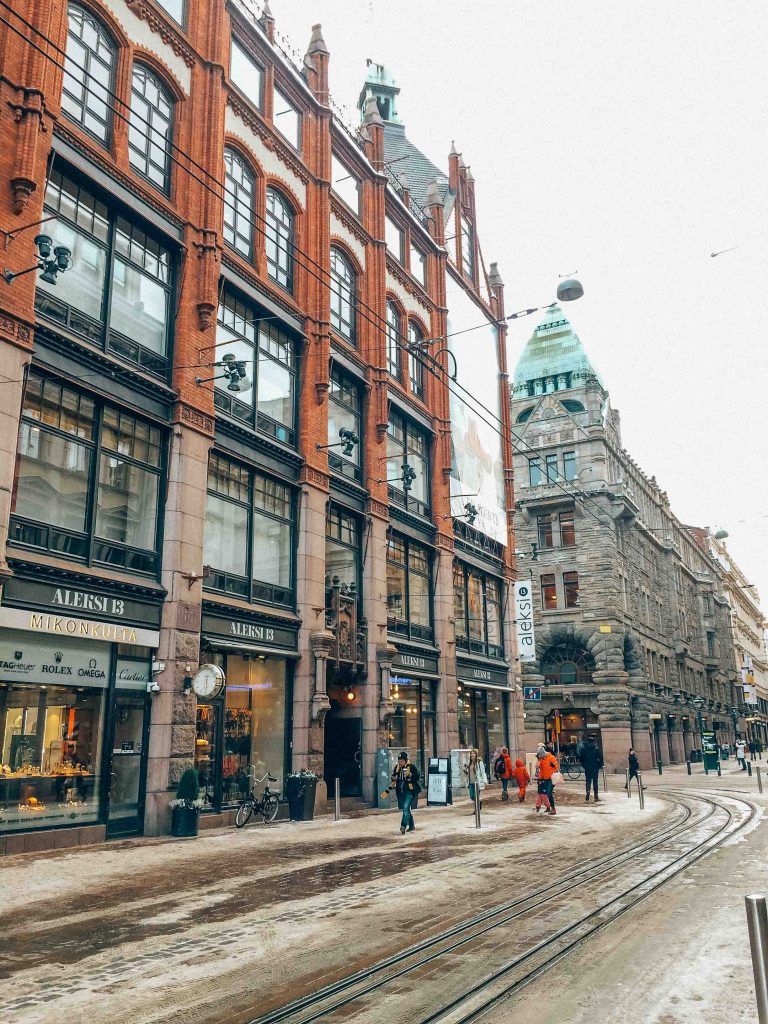 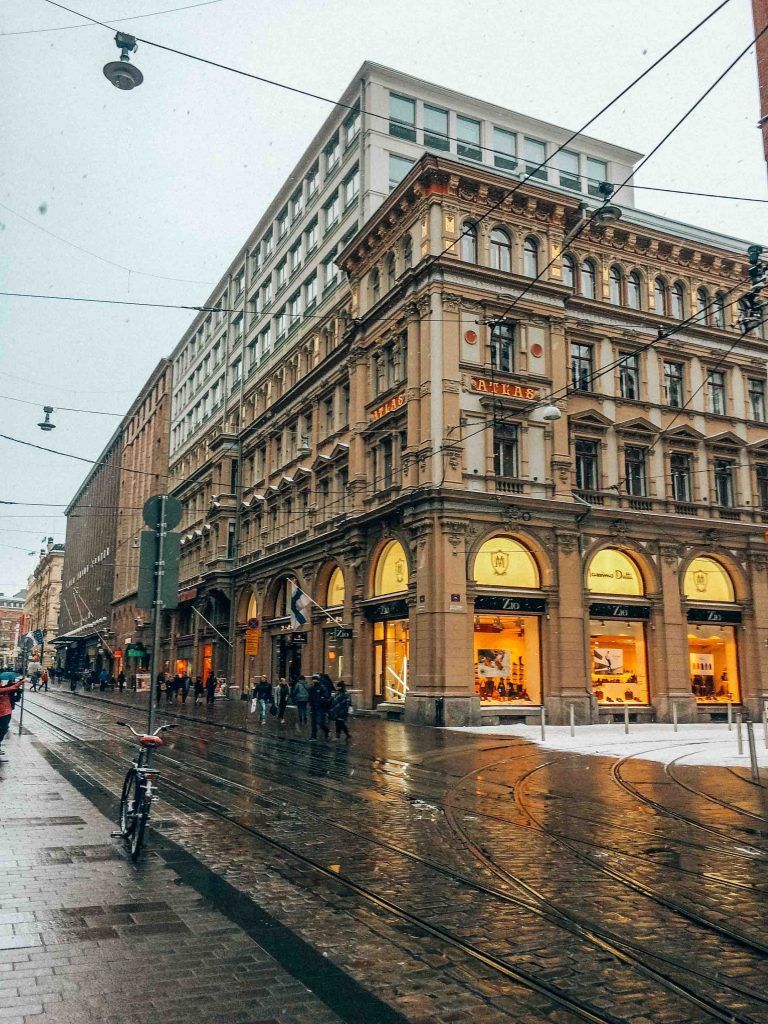 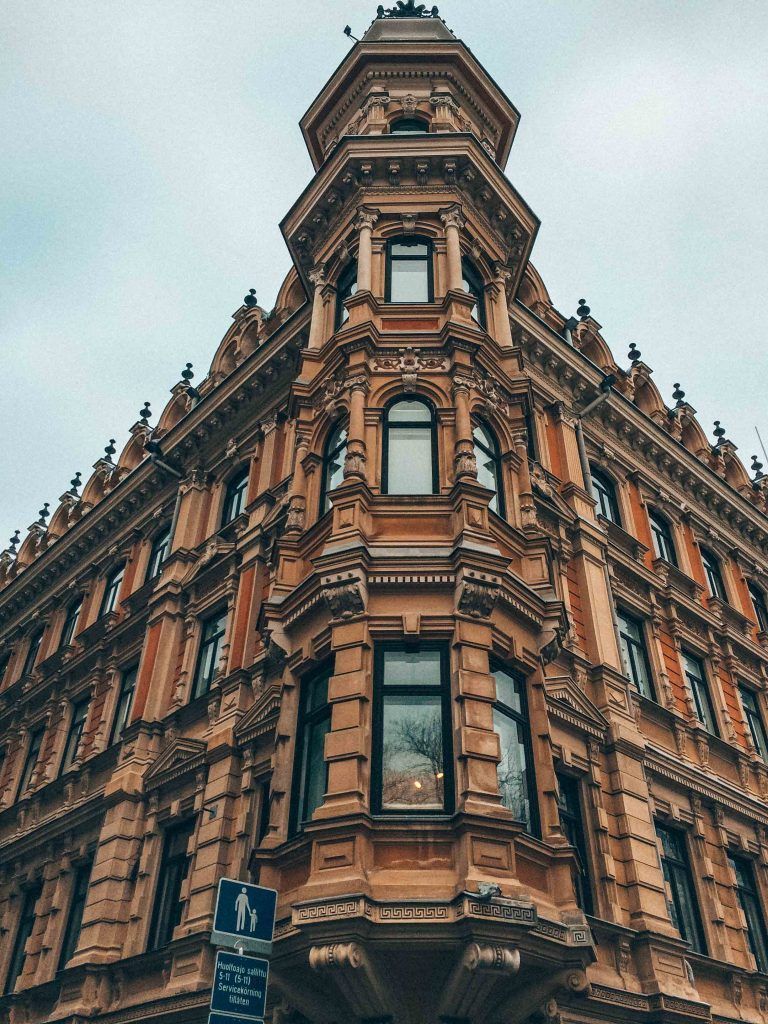 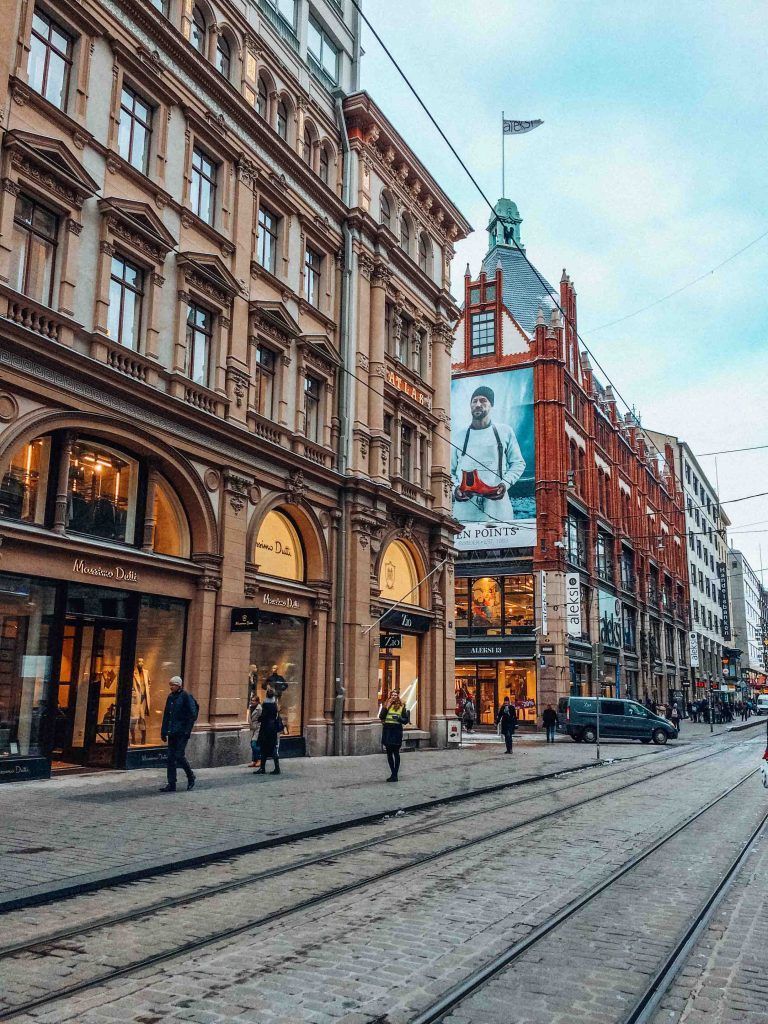 It is the main railway station of Helsinki and from here, all the trains depart so this is one of the most visited buildings. This train station was chosen as one of the most beautiful one by the BBC in 2013. The building was built in Art Decó style with green domes and a large clock tower. 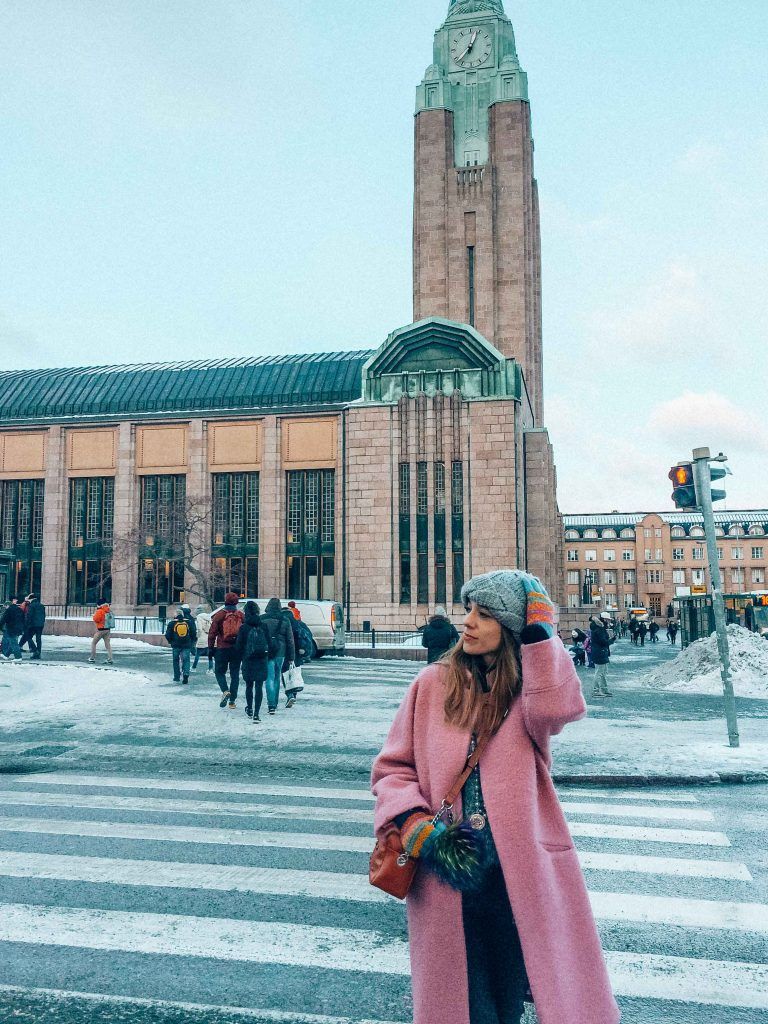 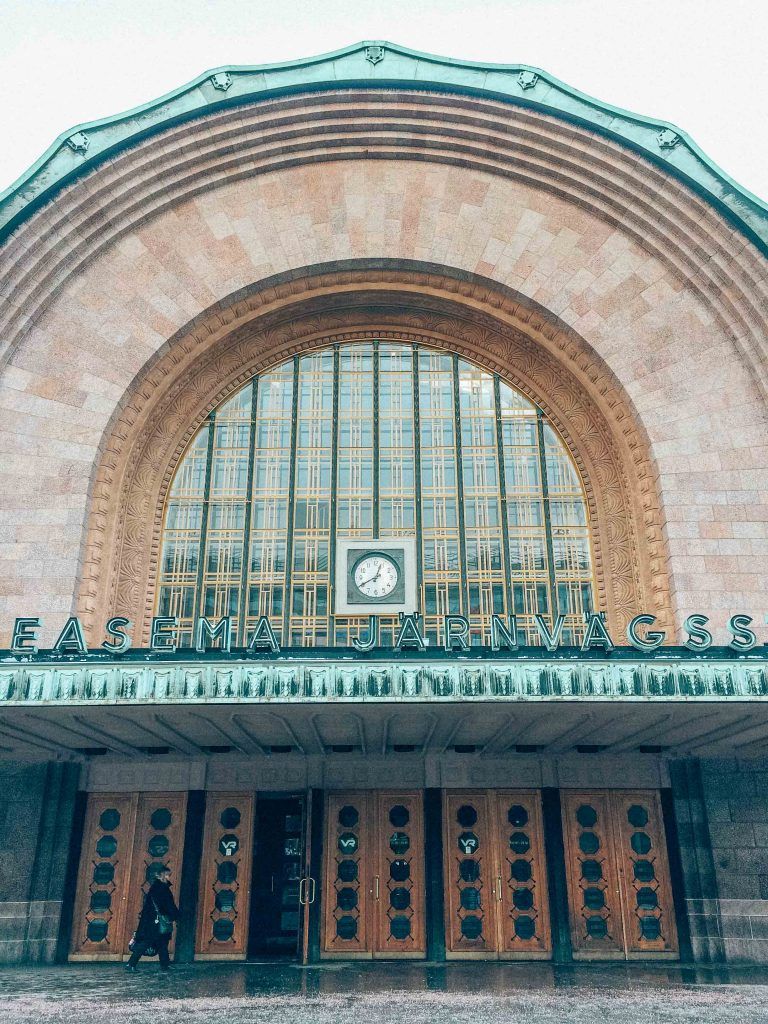 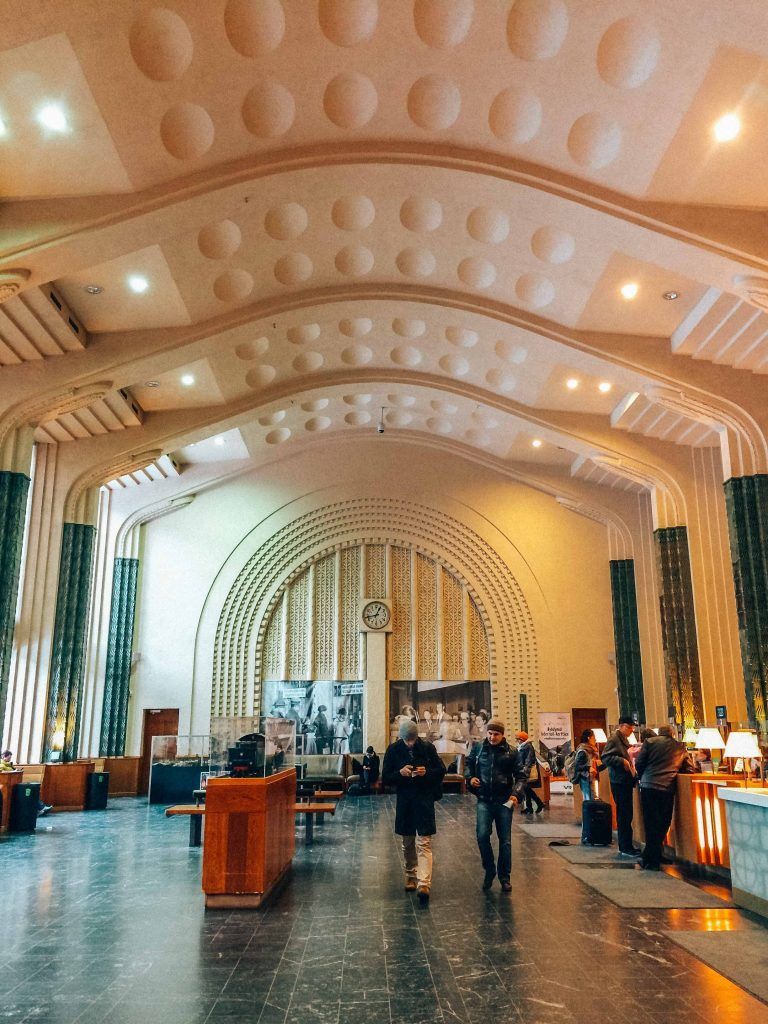 The interior of this church is excavated in the rock and it has circular shape with a large glass dome that receives plenty of light. This church has a spectacular acoustics, thanks to the rough surface of the stones that were left practically uncut so a large number of concerts take place here. There is a big organ in one side also.
Direccion:lutherinkatu 3
Hours: Mon-Sat: 10 and 17, and Sunday, from 11:45 to 17 h. 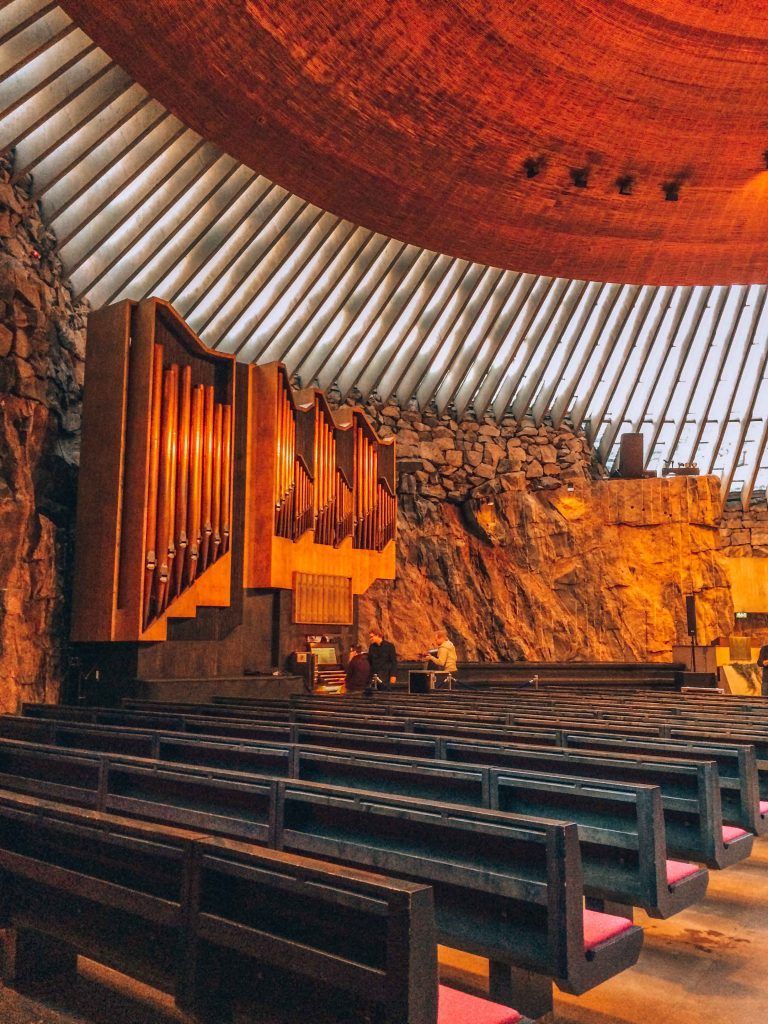 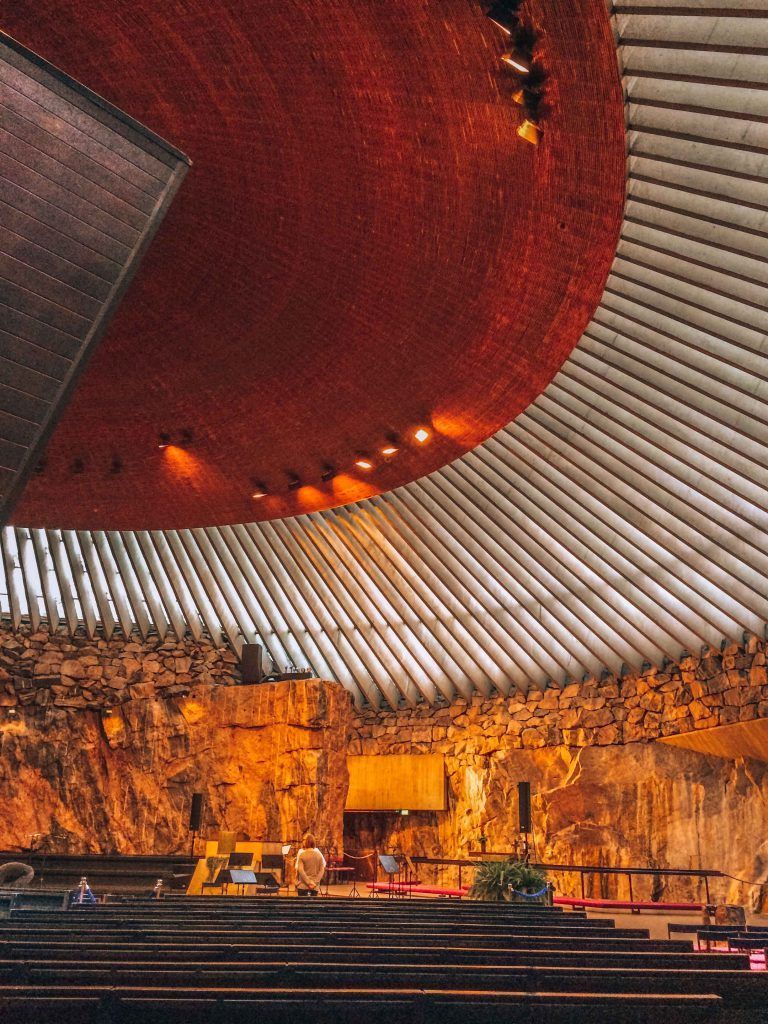 Also called “Cathedral of the Dormition”, is an Orthodox Cathedral. It was built by a Russian architect inspired by the one in Moscow. It has thirteen domes representing Christ and the twelve apostles and it is full of icons inside. It has a very nice Park around. 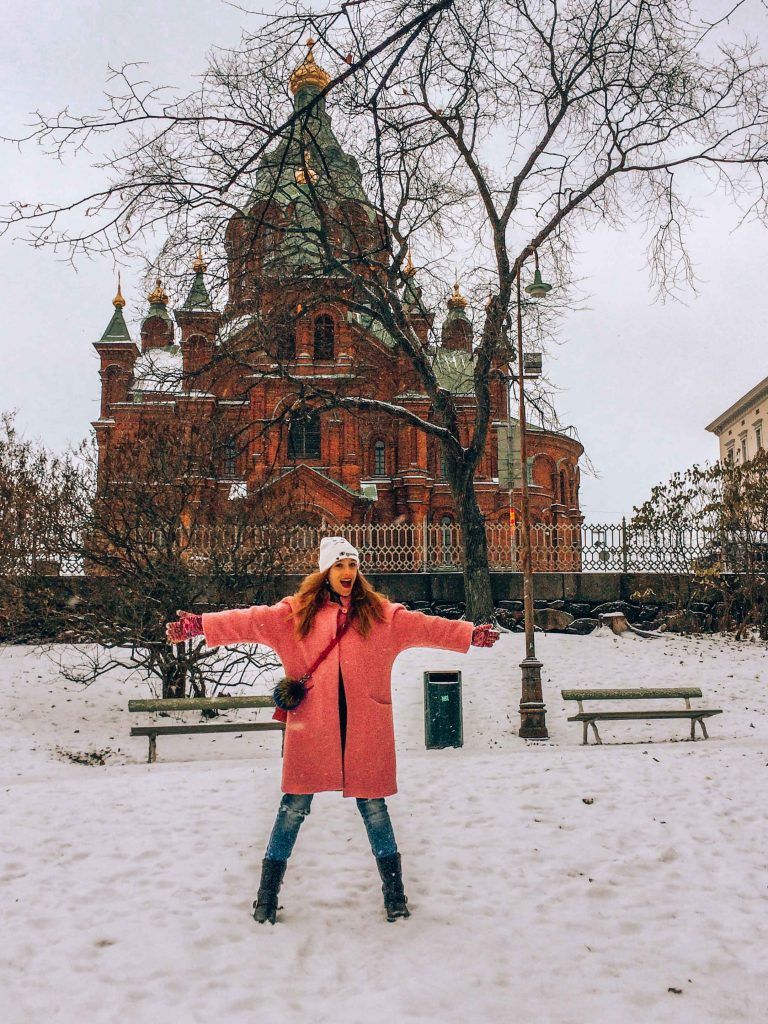 Located in the beautiful center of Helsinki, the Stockmann Department store offers a wide selection of inspiring, quality products from top fashion, cosmetics, Finnish design, souvenirs, home products and groceries as well as cafés and restaurants – all under the same roof. 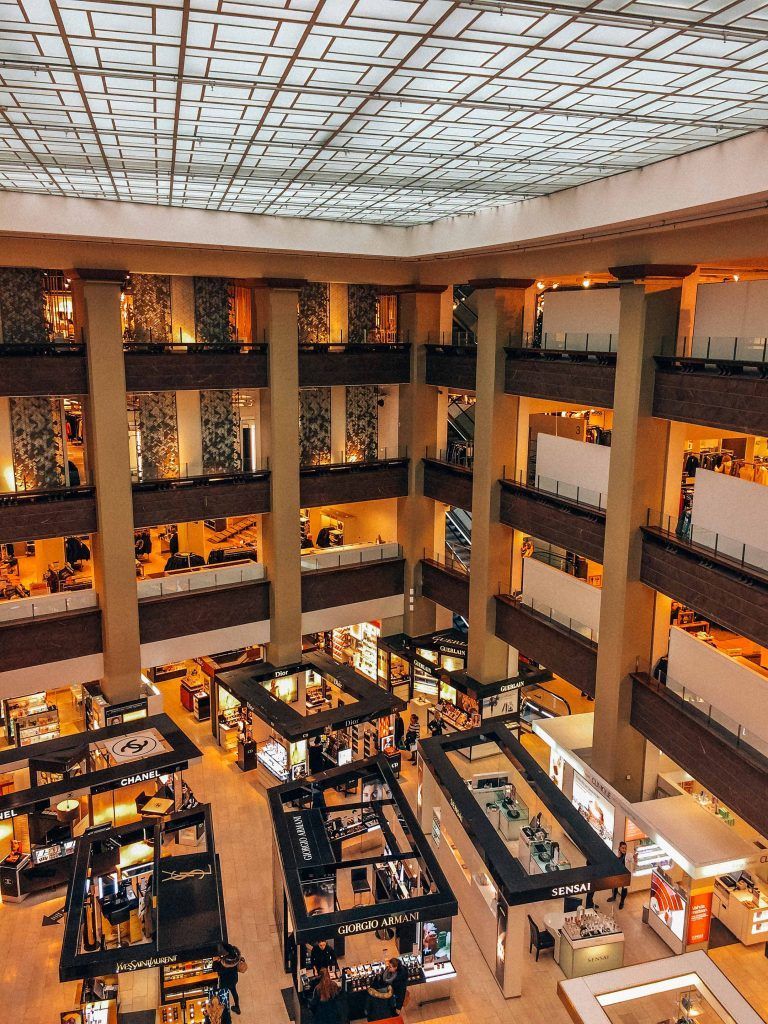 This statue of Aleksis Kivi is located at railroad square and the national theatre of Finland has just behind. and who is Aleksis Kivi? It was who wrote the first significant novel in the Finnish language in 1870.. 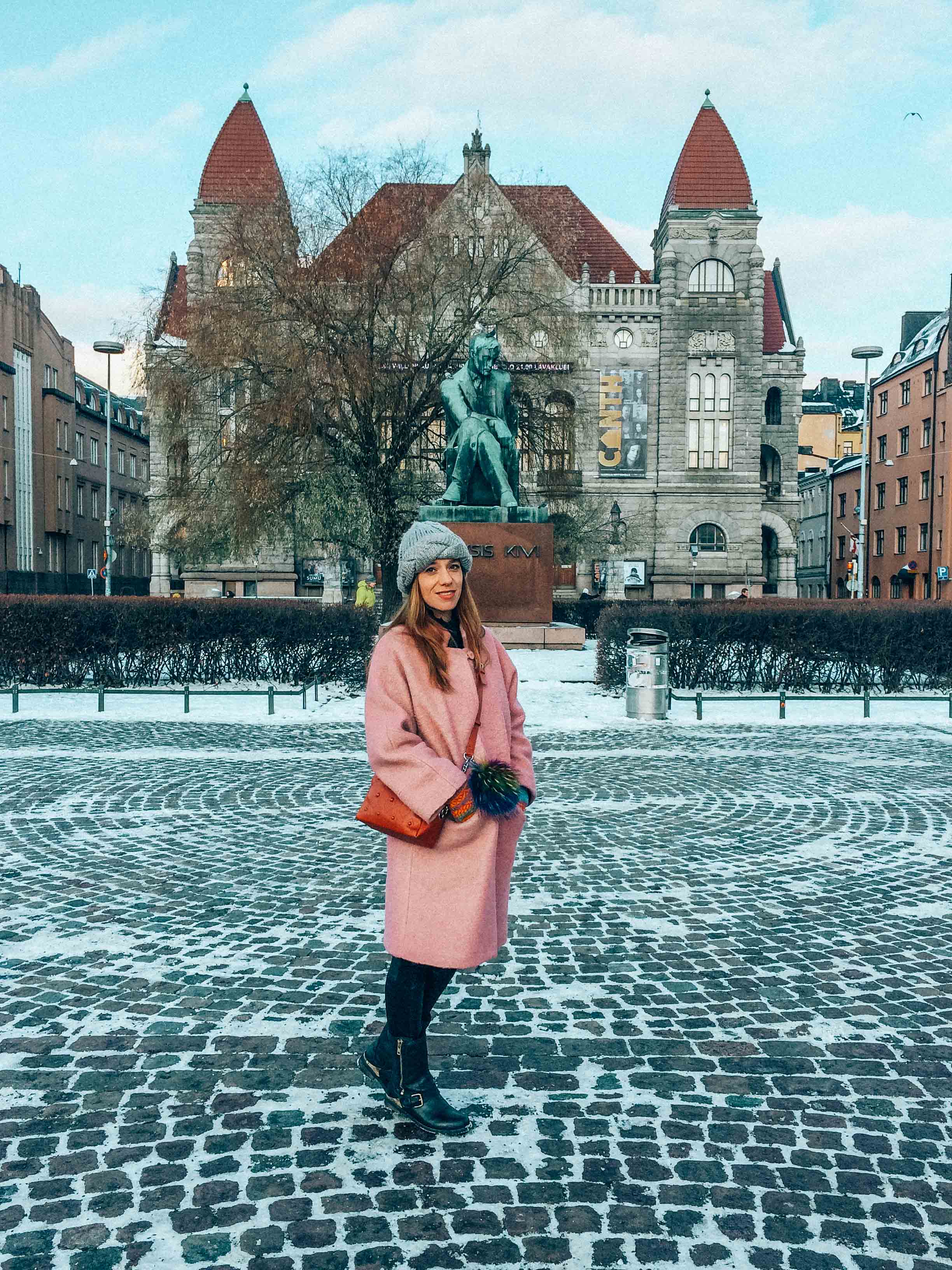 This Lutheran neo-Gothic-style Cathedral will surprise you if you are walking around the Design District (next post). It is the largest Church of Helsinki. For its good acoustics, this Church also hosts a large number of concerts, like the stone church also does. The exterior is majestic, with its twin towers of 74 meters tall and its green domes. 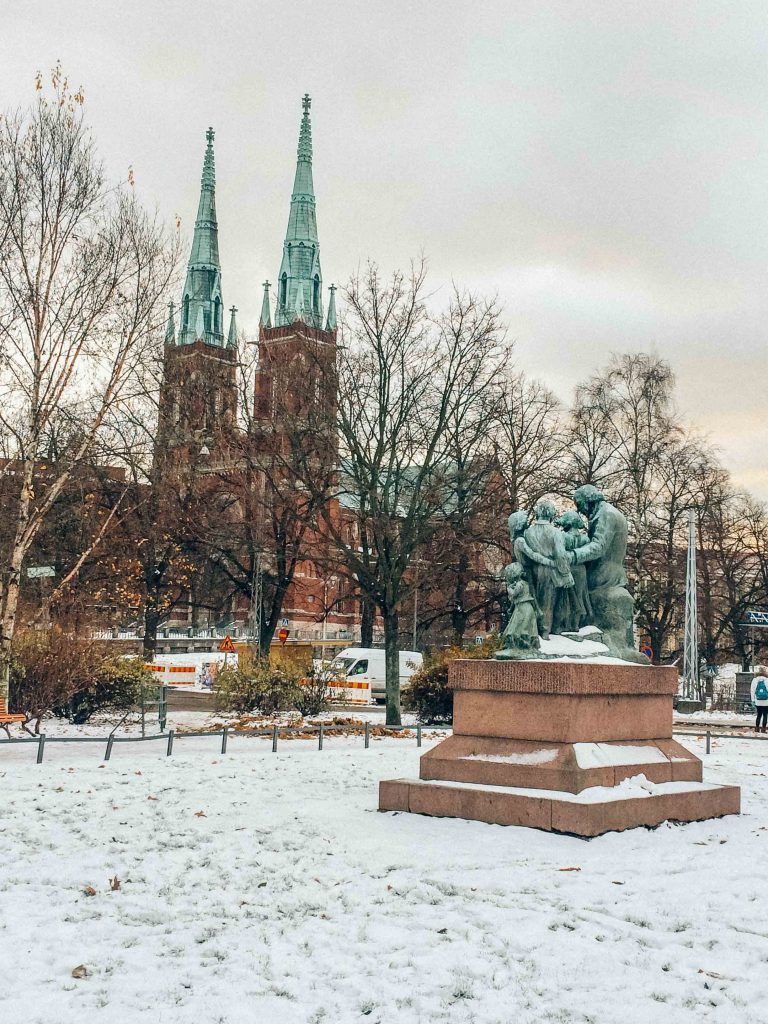 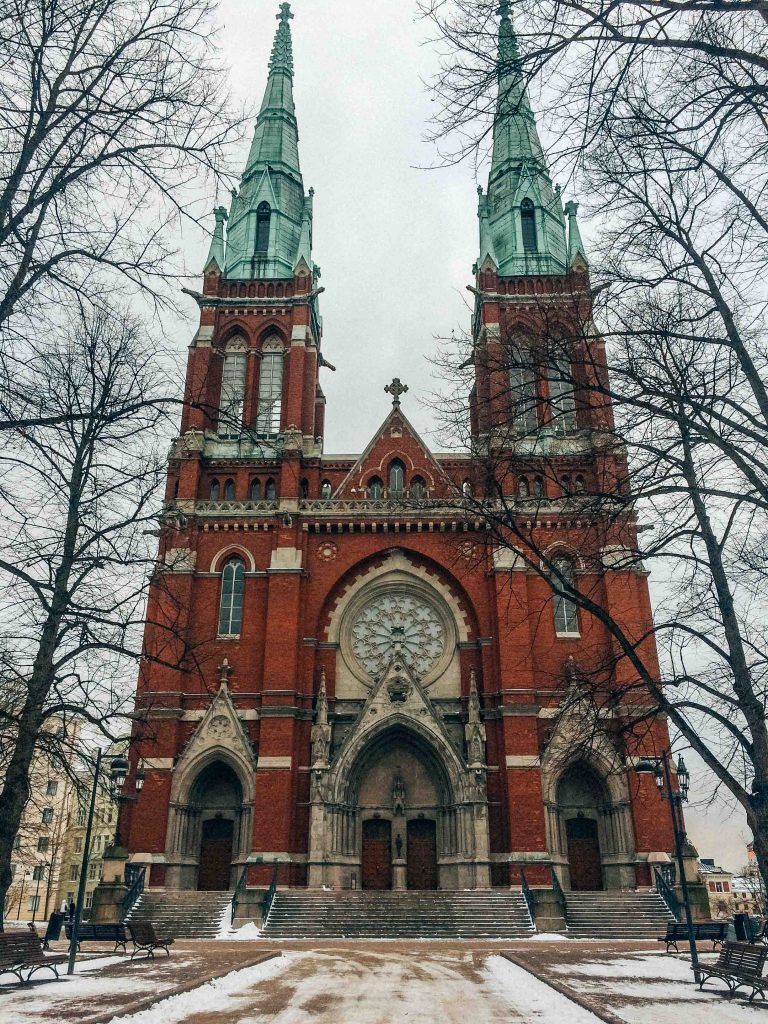 As in many other cities, Helsinki also has a “Love Bridge”. Located between the market square and the Uspeshkin Cathedral, this area is very well also for having dinner at night as there are plenty of bars and restaurants with grea atmosphere, mostly in summer. In the first two photos, you can see the Orthodox Cathedral in the background. 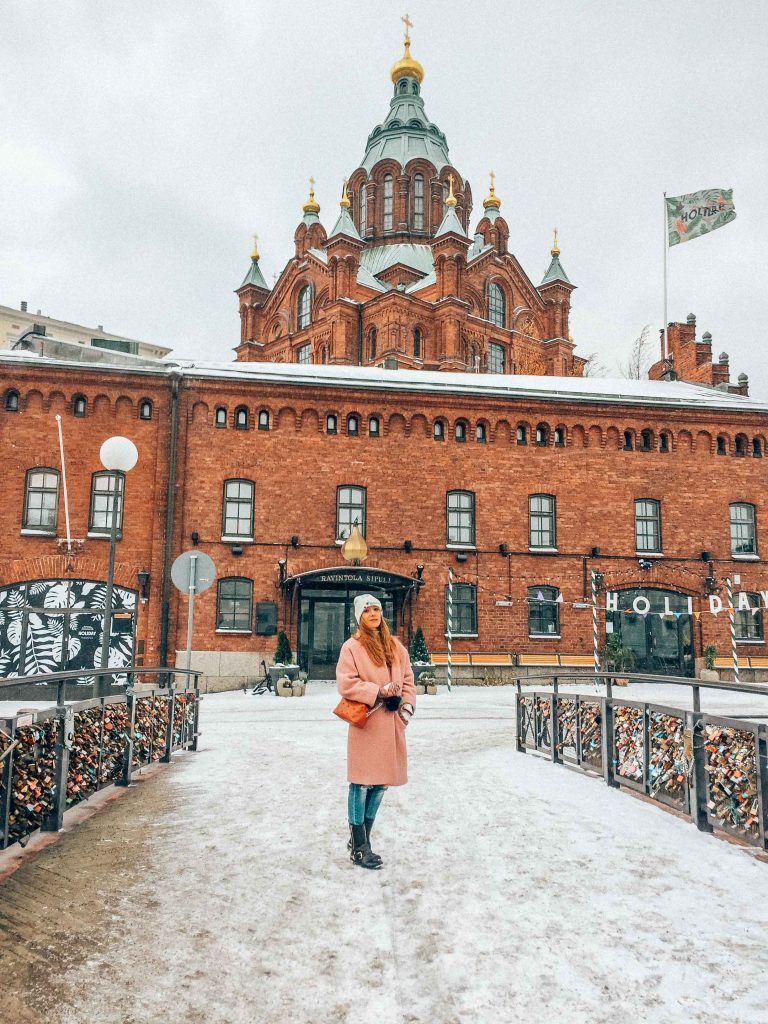 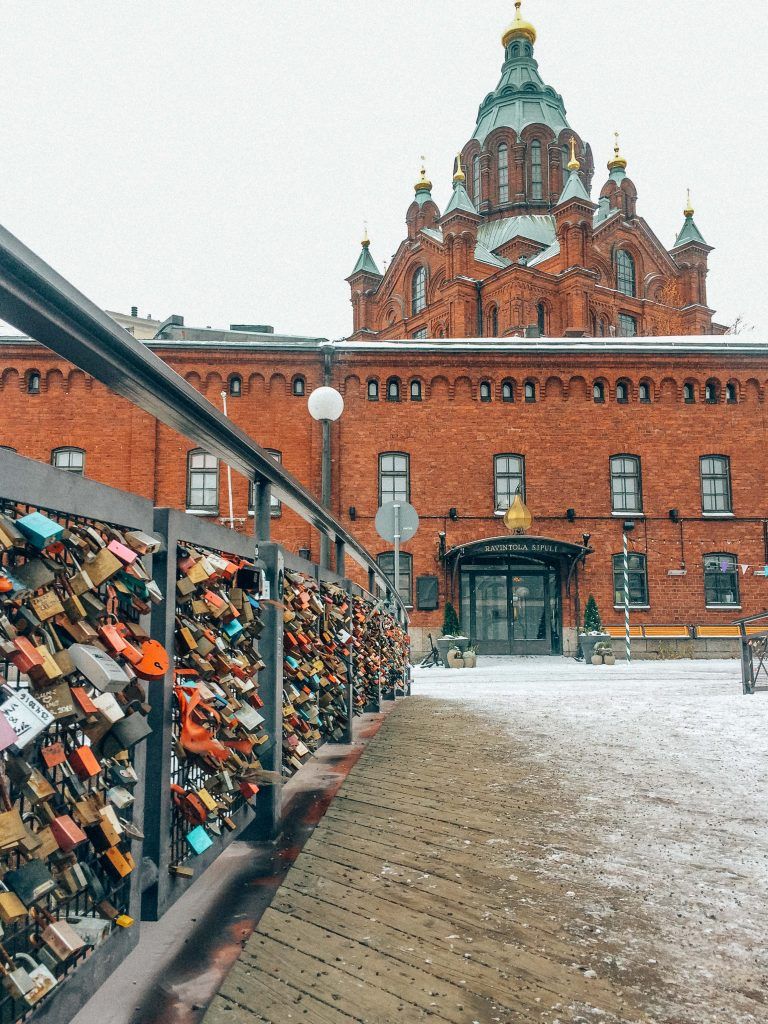 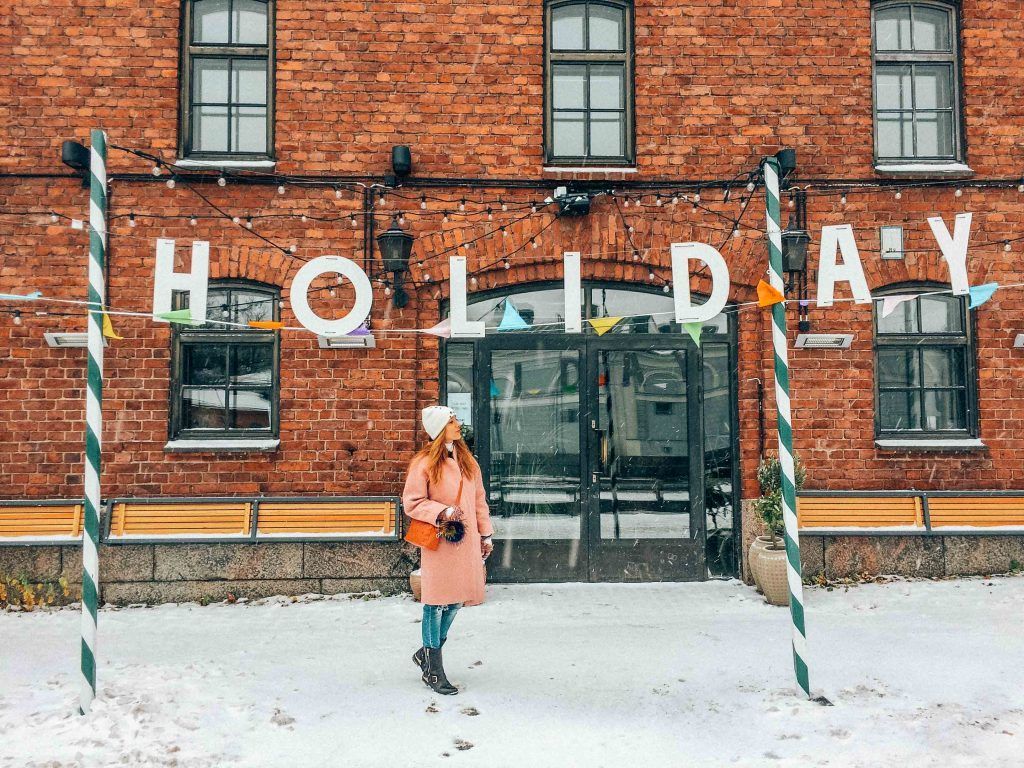 Have you been to Helsinki?

¿What did you likee the most and the less? 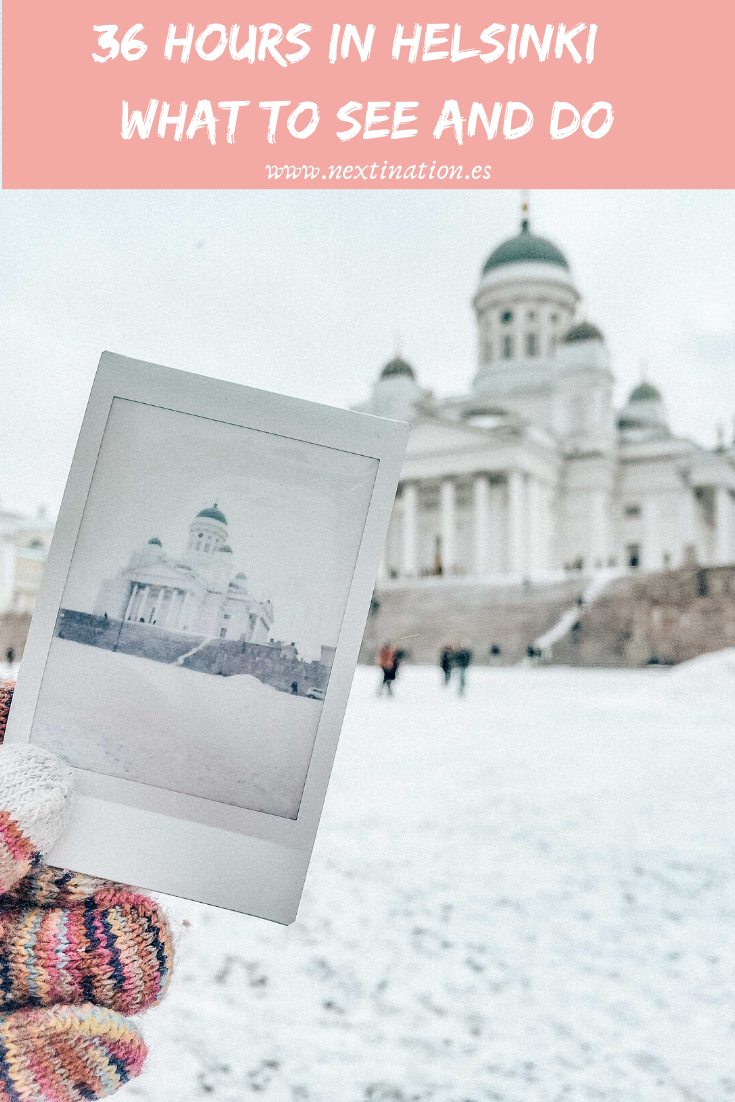 Discover the wonderful island of Crete in Greece