Chalet on the Water

Have you ever stayed in a Chalet on the water? That was one of the most impressive experiences I could experience these past weeks in Malaysia.

This past year I decided to celebrate the New Year at the beach. The cold weather in Moscow made me think that I had to come back with full battery to face the harsh winter of Moscow. Then it was when I thought about Langkawi and when I saw the Berjaya Langkawi Resort with the incredible Villas on the sea I couldn’t help but buying the flight tickets to go to Malaysia.

I had never been to Malaysia and it was a place that I had in my bucket list for a while.

The truth is that Langkawi is not a well-known island in Asia as a tourist destination, although it does starting to be, in fact, it is one of the most famous in Malaysia and it is only one hour’s flight from Kuala Lumpur.

The Berjaya Langkawi Resort impresses from the moment you enter into the Lobby. All made by wood with high ceilings and several ceiling fans since the lobby is open on all four sides. It occupies a land of more than 80 hectares and has more than 400 villas. In fact, there are many buggies that constantly pass through your door and take you to the Lobby and to the beach.

We stayed in a Premier Chalet which are half land half in the water and have views, therefore, to the sea. It was simply spectacular, wide, with marble floor, a huge balcony with sunbeds and a giant bathroom with shower, a bathtub and a large window that looked out on the room so that you could see the terrace and the sea from there.

The views were impressive but without a doubt, the best was at night when the tide rose and you could hear the waves from the bed. It was a dream come true.

We spent a whole week there, arriving the morning of December 31st. We found that they were preparing everything for the New Year’s Eve dinner on the beach and after done the check in, they informed us of the table we would have that night. Everything was spectacular and we could enjoy the best Reggae Party I’ve ever been in, as well as the best fireworks at 12 am on the beach. 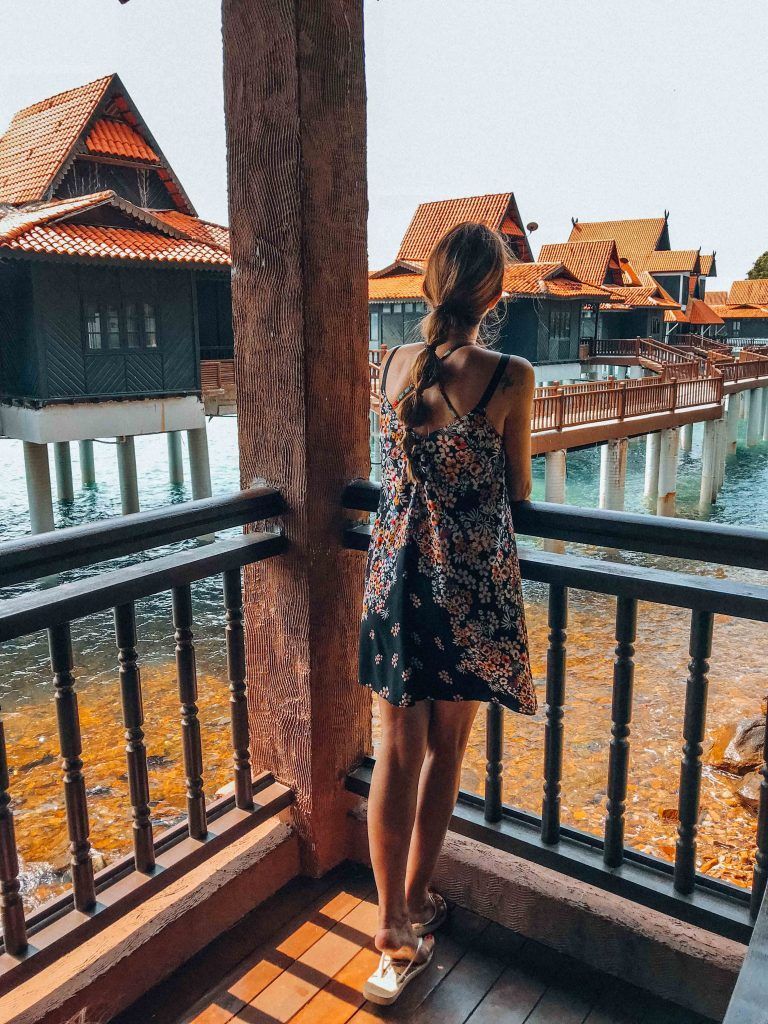 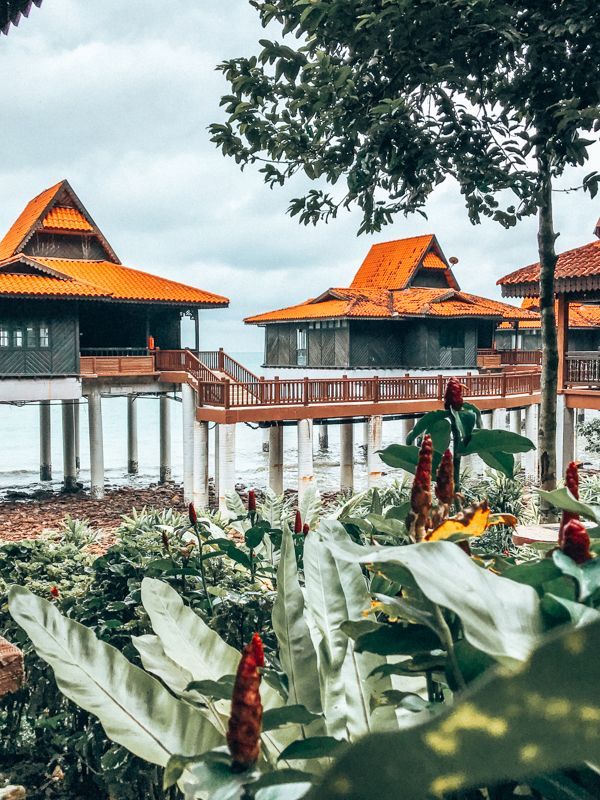 The Berjaya Langkawi Resort has a quite large pool with waterfall and a pool bar inside it and a jacuzzi. We are more a beach kind of person, so we spend every day at the wonderful beach. I was impressed in a good way because the sand was so white, with a lot of palm trees and lots of sunbeds. You can play beach-volleyball and they also have a tennis court in the Resort.

You can do various water sports there, such as renting jet skis, the banana boat, doing kayak or catamaran courses, windsurfing or Parasailing, take a yacht to watch the sunset or sign up for one of the free mangrove tours there is in the same Resort and this area of Langkawi is protected, since it is part of a GeoPark.

If you go with children, the Berjaya Langkawi Resort is designed for families too. It has a playground next to the pool as well as a children’s pool. 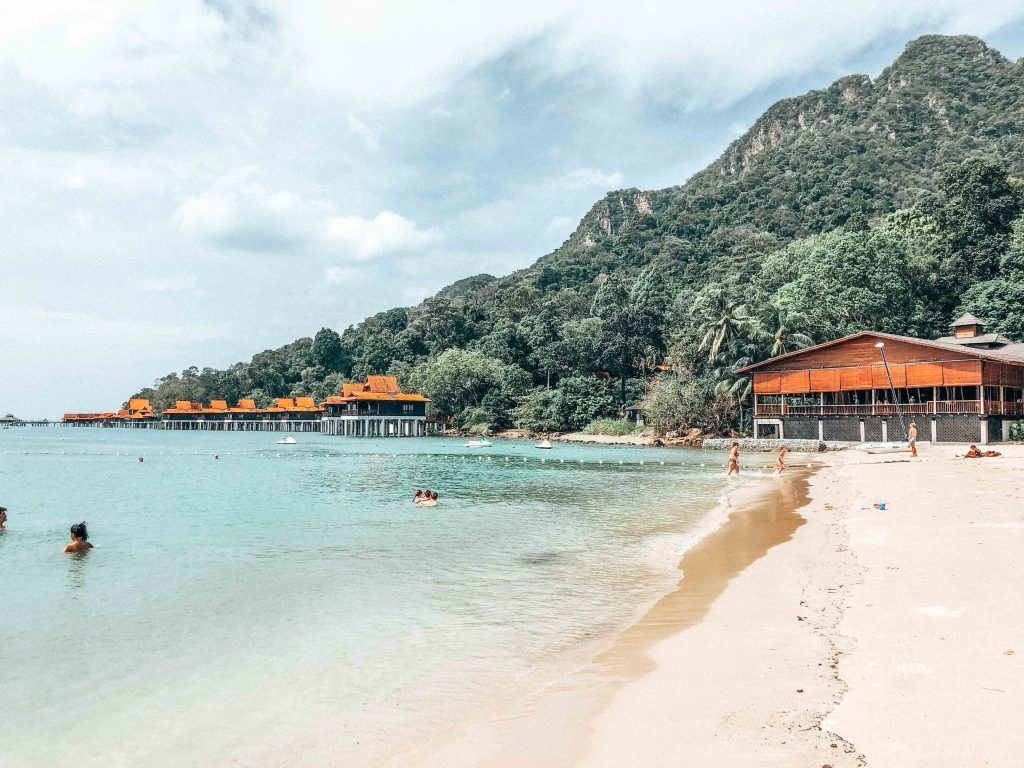 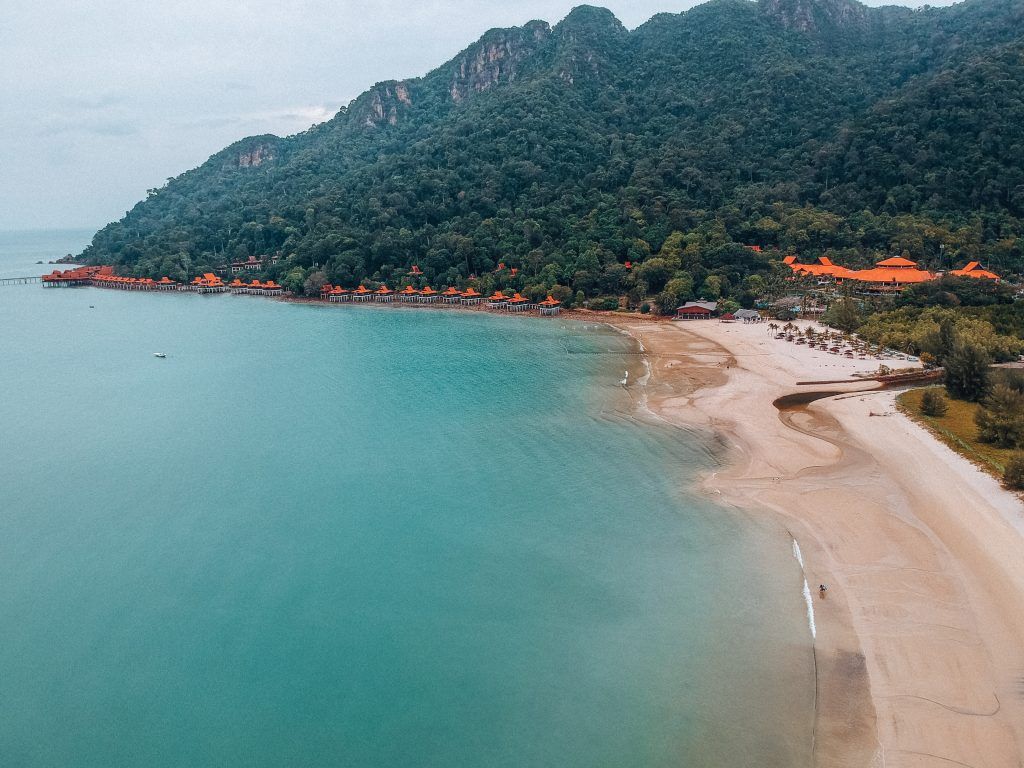 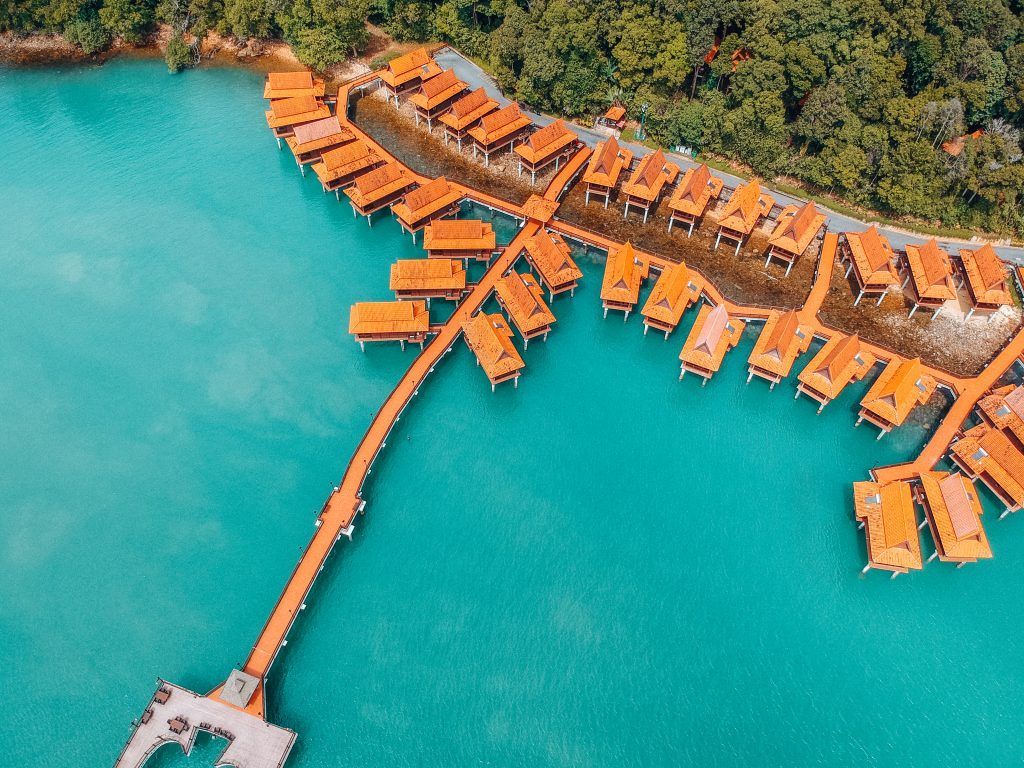 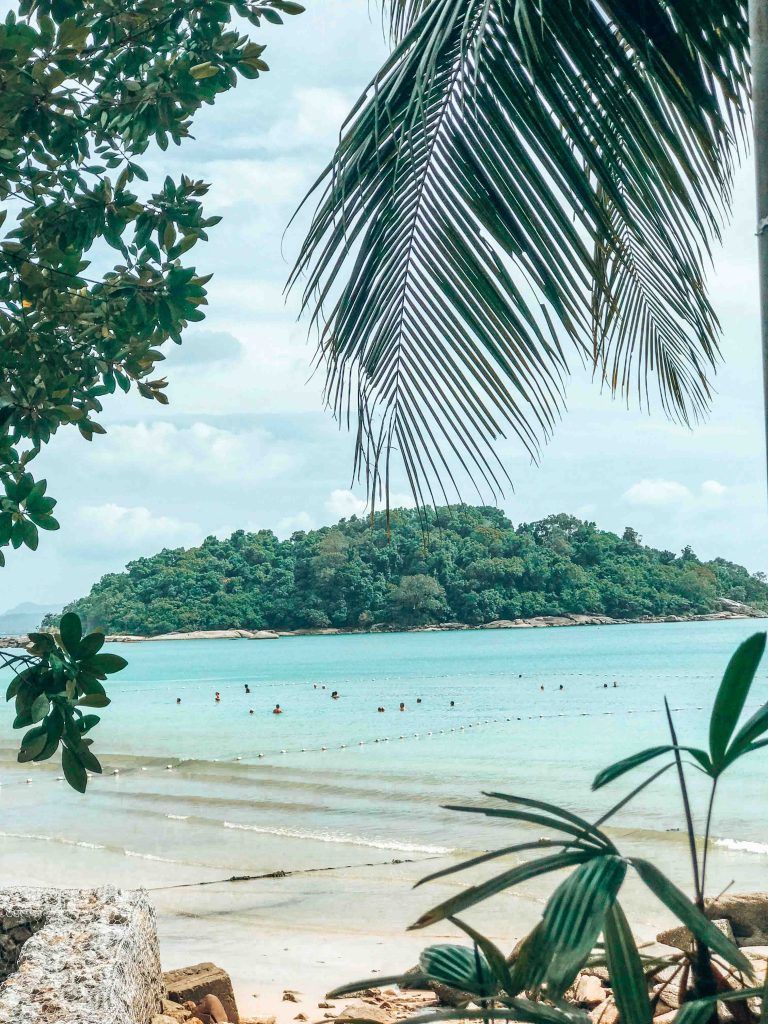 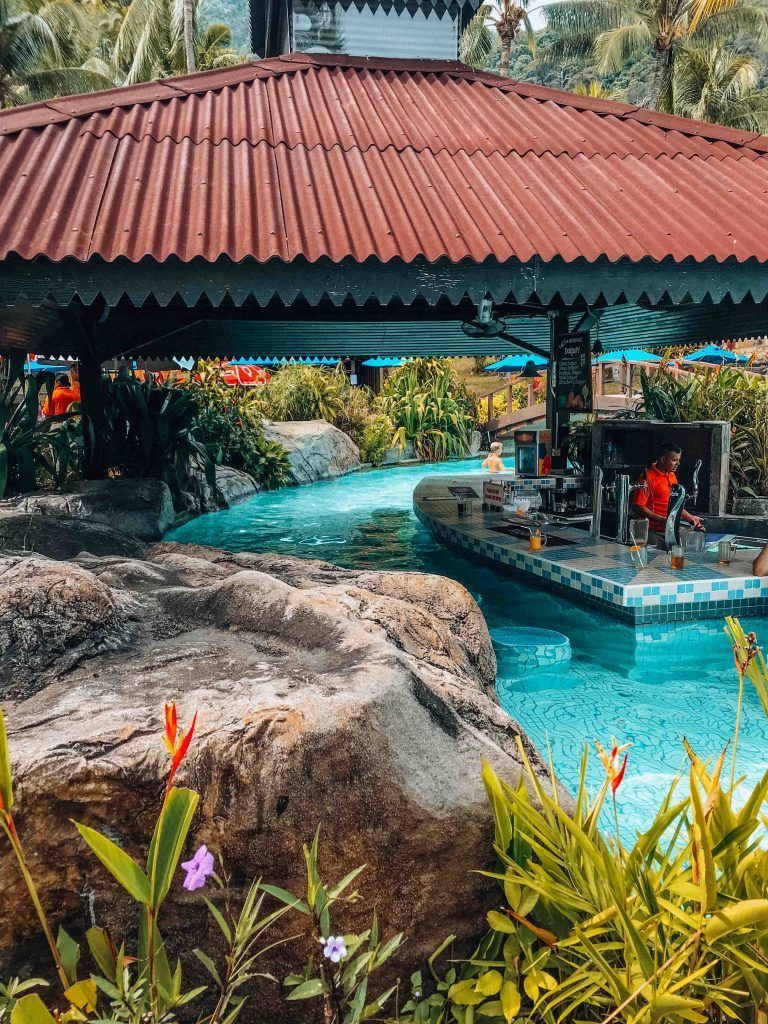 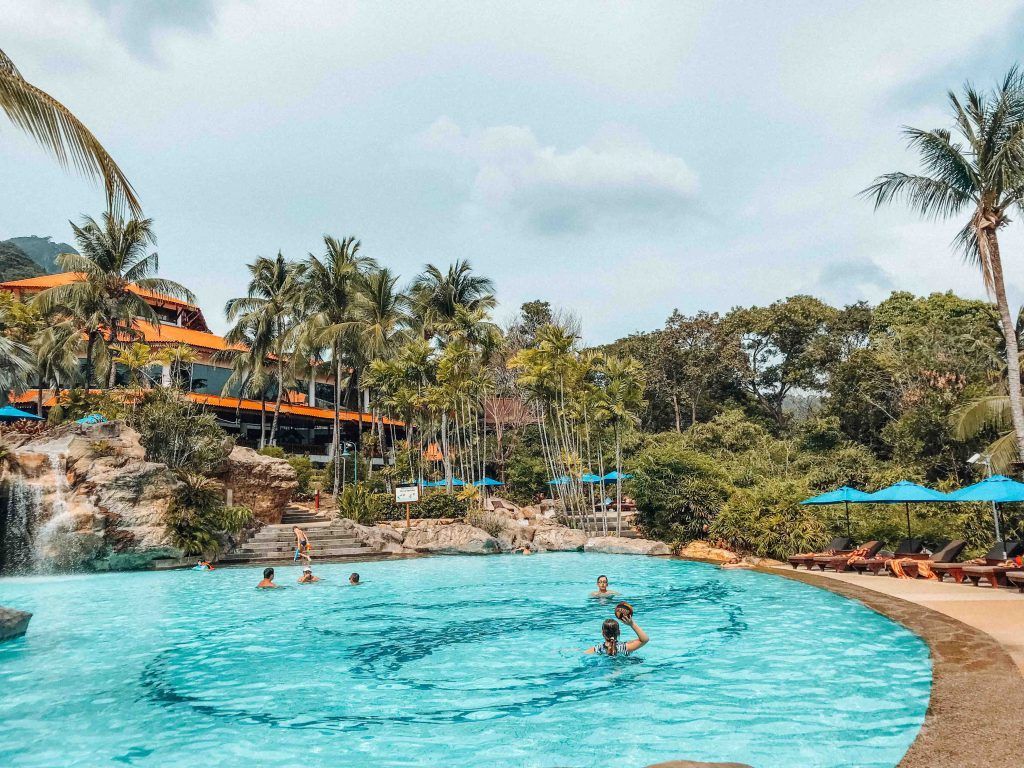 The Berjaya Langkawi Resort is located in the UNESCO Global Geopark, which basically means that it is in the middle of a tropical forest, and as such, is surrounded by wildlife. This means that you will have monkeys on your balcony and around the complex, you can see lizards wandering around, you will see geckos and lizards on the walls when the sunset comes and you will see, if you are lucky as it happened to us, some planetary squirrels (they are squirrels that have membranes like bats and they plan from one tree to another).

This is part of the experience, so if you like animals and wildlife, this will be your idea of ​​paradise. In addition, the noise that comes from the forest, both day and night, is incredible: a constant and shrill buzz of various insects, birds, monkeys and geckos fills the air 24/7.

This can lead to sleepless nights at first, but soon you get used to it, and it really is a fabulous noise. In fact, a curious fact is that one day woke up in the morning and had a monkey inside the room! We had left a bag of worms next to the television and there was the monkey gobbling up the whole bag haha.

The UNESCO Global Geopark of Langkawi is located in the extreme northwest corner of the peninsula of Malaysia. It is unique in the sense that it was formed on 99 islands that together formed the legendary archipelago of Langkawi. The natural landscape of Langkawi is a combination of hills very covered with vegetation and some quite arid rocks.

The same hotel organizes several excursions to discover all this wonderful nature that surrounds the hotel. One of the most famous is the one that takes you to visit three islands, Pulau Dayang Bunting, Pulau Singa Besar and Pulau Beras Basah.

The first also known as “the Pregnant Woman” that gets its name from the three mountains that make up the island, one in the shape of a pregnant woman lying on her back. In another of the islands you will enjoy a great experience such as feeding the eagles and you will see more than 40 on top of you. 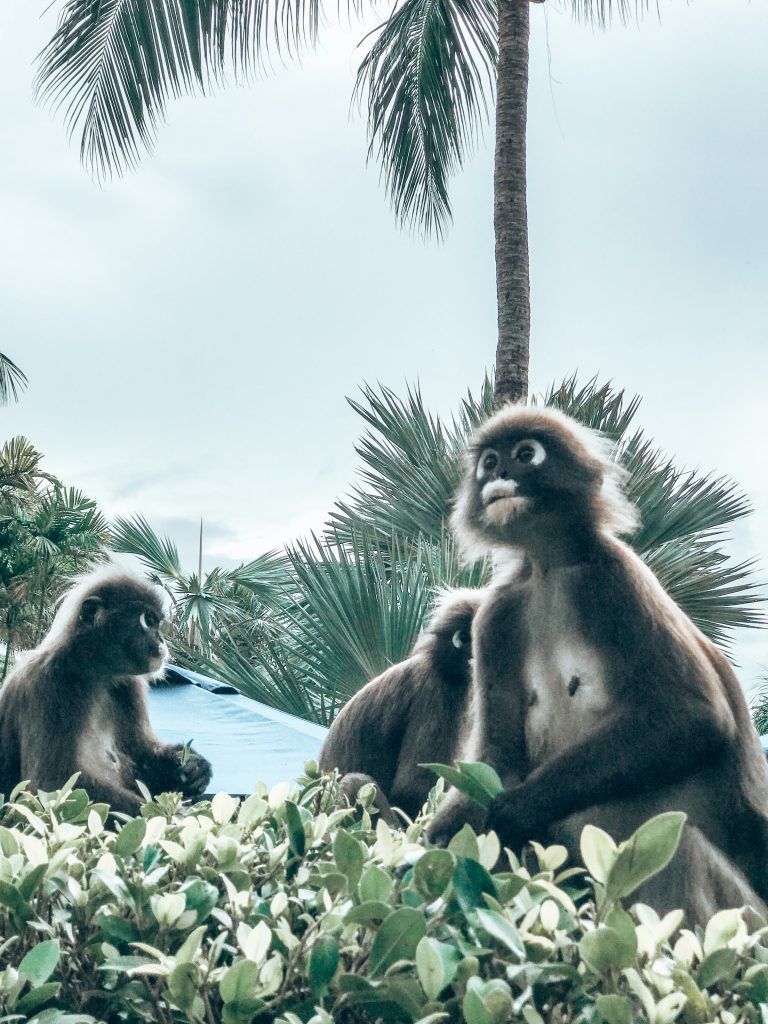 The Berjaya Langkawi Resort was without doubt one of the best choices I have ever made. It has four restaurants, a lounge, two bars and a sport bar.

I especially liked the beach bar. It was very comfortable to snack on something at noon if you were in your swimsuit and in the same sand. The cocktails were delicious. I recommend the one that called “Green Island”. It was perfect for a pizza or snacks and hold until dinner. You could also take the drinks to the loungers.

I also liked the Beach Brasserie restaurant that was on the beach and had a different menu for lunch and dinner. To eat, the menu consisted of snacks and fast food, instead, the dinner menu had a very elaborate meal, pasta, pizza, salads, grilled and grilled meat and fish and a large selection of Indian food. We went there about 3-4 times and that’s also where we had breakfast, a breakfast with a great variety and the best thing was to see the beach and the sea while having breakfast.

Another restaurant that we liked was the Oriental Pearl, of Asian food, basically Chinese and Japanese. It was all delicious.

However, the one we liked the most was Phan Thai, the Thai restaurant of the Resort and the only one on the island. Only its location was already spectacular. It was at the end of all the Villas de Agua, on a pier well inside the sea.

It also has the possibility of celebrating weddings and romantic dinners for two on the beach during sunset. 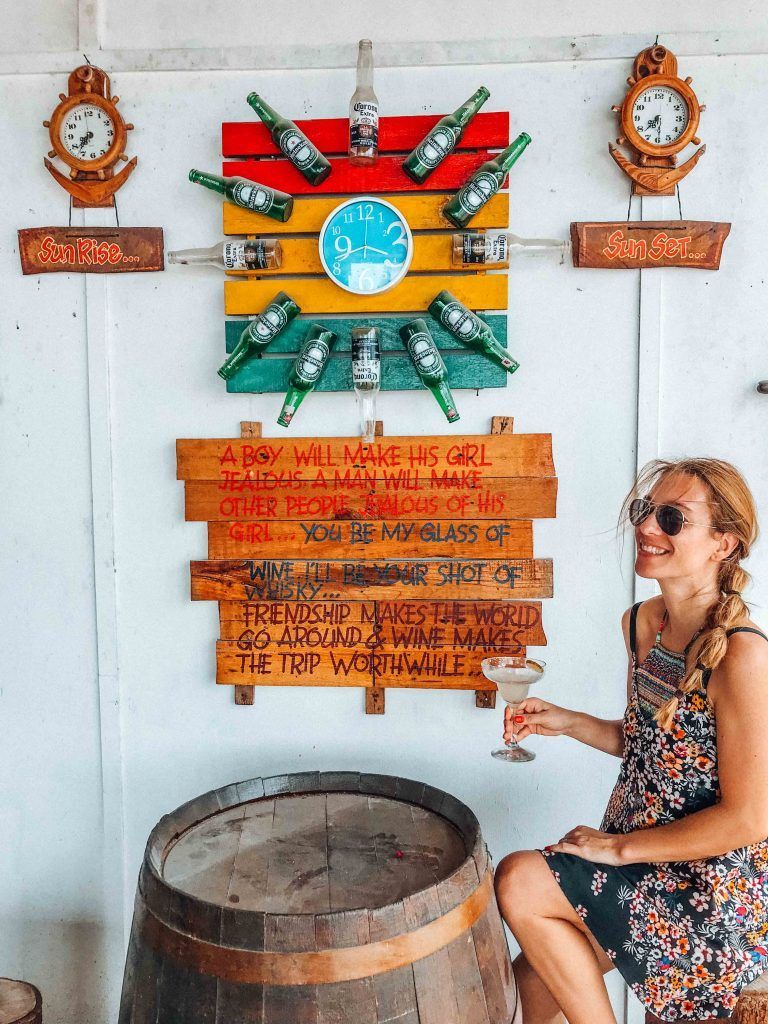 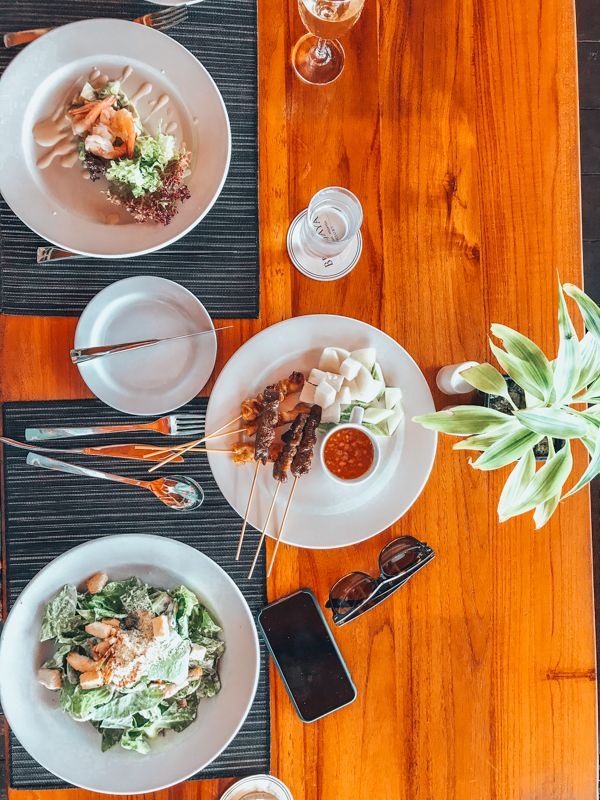 In short, it was a great experience. Just the fact of spending the New Year on the Beach was already impressive but having done it at this Resort made everything even more incredible.

And you? How did you celebrate New Year’s Eve? Do you know Langkawi? Have you ever stayed at a similar Resort? Where?

Have you slept in a water villa? If so, where?

Leave me the comments below.

Thank you very much for reading.

Where to travel to escape winter

What to see in Kuala Lumpur in 72 hours Part 2