If you are reading this post it is because you are going to travel to Uzbekistan soon, or,  simply because you have always been fascinated to read about travel and you are curious about this country and would like to know more about its relationship with the Silk Road.

Either way, you should read this Samarkand Travel Guide as well as recommendations on where to eat or where to stay.

I also attach a map of all locations in Samarkand. 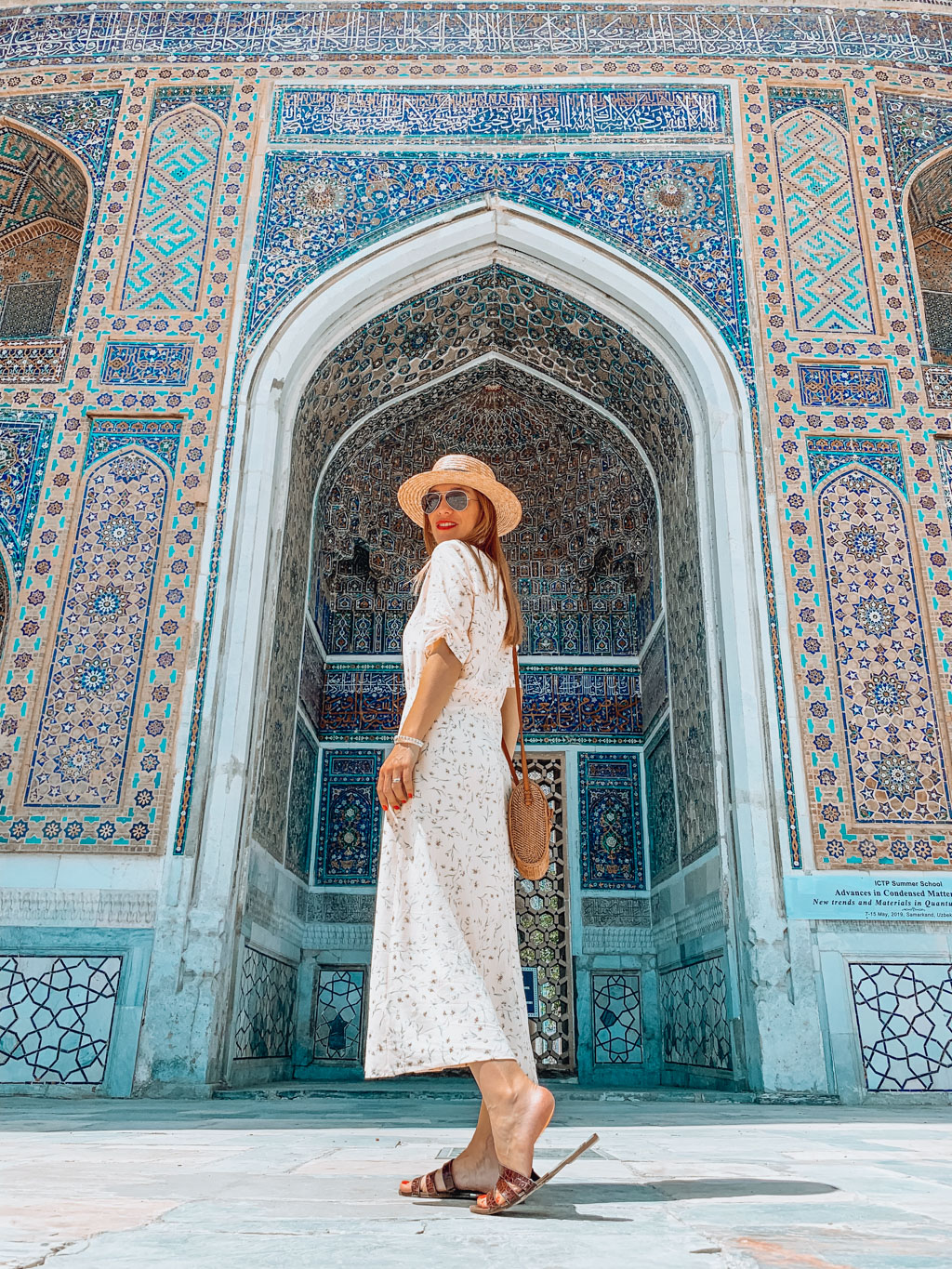 Samarkand is a mixture of madrasas, mosques, mausoleums and minarets. It’s like getting into the world of “One Thousand and One Nights” or feeling yourself in the scenery of the “Aladdin” movie.

It is simply impressive. Its architecture stands out for its golden and blue tiles, with intrinsically carved details.

The Timurid period was the most significant for Samarkand, between the fourteenth and fifteenth centuries. Tamerlane, better known as Timur or Amir Timur, which means ‘iron’, was a Turkish-Mongolian military and political leader and the last of the great nomadic conquerors of Central Asia.

In just over two decades, his armies crossed from Delhi to Moscow, conquering and sweeping some cities and forgiving others. From 1370 till his death 1405, Temur built a powerful empire and became the last of great nomadic leaders.

Tamerlane decided to make Samarkand the capital of his empire that extended from India to Turkey. For 35 years he built a new city, populating it with artisans from all the regions he had captured.

Of all the cities of Uzbekistan, Samarkand, which has been declared a World Heritage Site by UNESCO, probably has the largest collection of important historical buildings, all full of mosaics, reliefs, tiles and a unique architecture.

I recommend you spend two days. We saw the city in one day and it gave us time to see almost everything, but if you want to see it in a more relaxed way, try to spend a day and a half or two here. 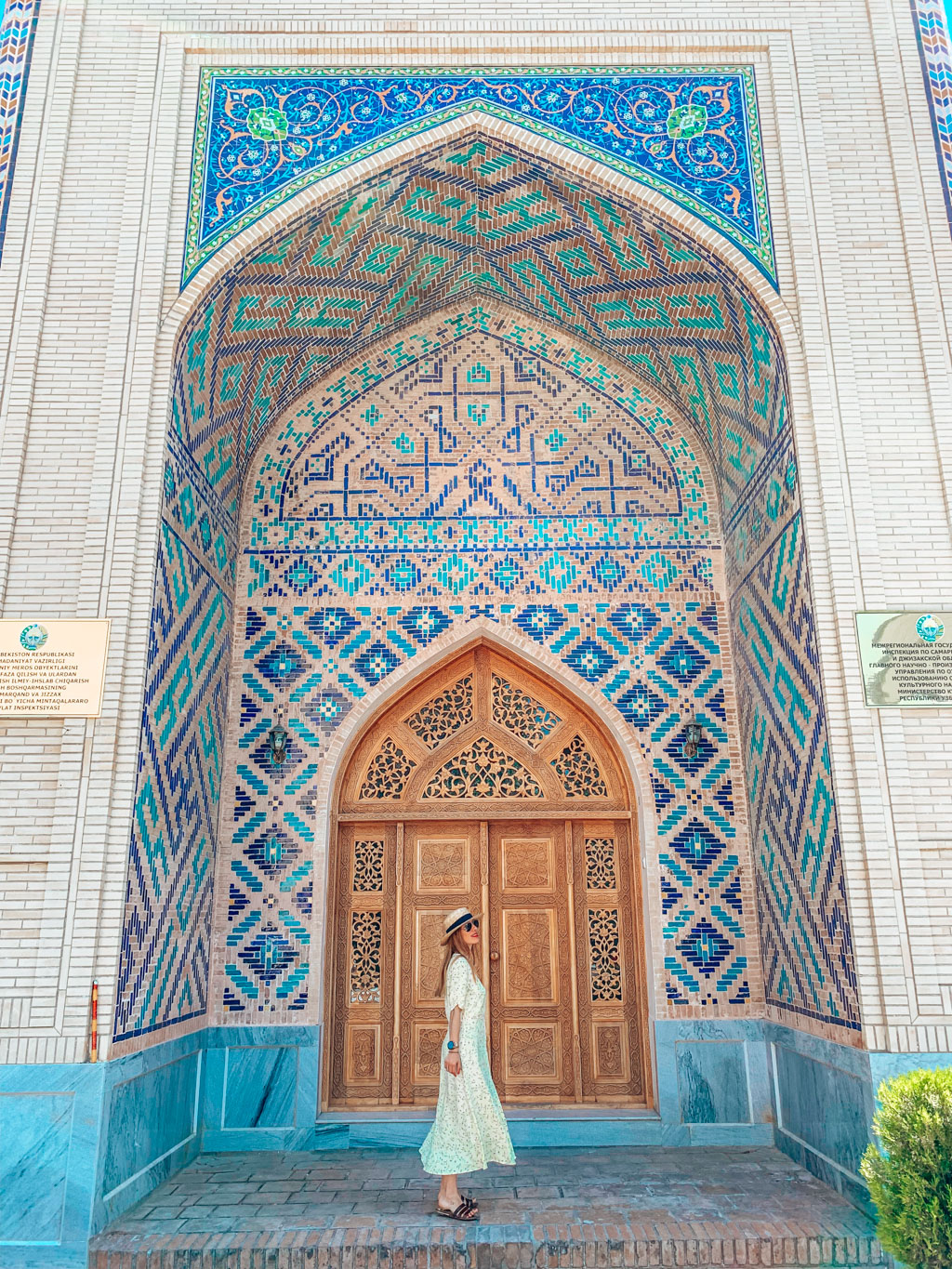 What to see in Samarkand?

It is the “true jewel” of Samarkand and probably of all Uzbekistan.

Actually, in each large city there was a central architectural complex, which was called Registan. The buildings that were part of this group stood out for their refined architecture, monumentality, originality and exceptional finish.

The one in Samarkand was the medieval center of commerce in the city where parades and royal proclamations also took place.

The Madrasah Ulughbek on the left side is the oldest of those in this square and dates from the fifteenth century. Built under the mandate of Ulughbek, who was a great scientist, astronomer and governor. He taught math, theology, astronomy and philosophy here. Around 100 students lived here in dormitory cells that can be visited today.

Tip
I recommend you go to the second floor. You have to pay a fee to the person who works there and you can go up. It is very worth it. What I do not recommend is to climb to the minaret. We did it and the stairs are super narrow, only one person fits and once up, the views are not really worth it.

In Madrasah Sherdor, from the 16th century and located to the right of the square, stands out the decoration of roaring tigers, contradicting the Islamic prohibition of representing animals or people.

The Madrasah Tillya Kari, in the center, stands out for housing, in a room to the left of the courtyard, simply spectacular golden and cobalt domes!

SHOW OF LIGHTS AND SOUND: Every night takes place here, after sunset. a wonderful show of lights and music. Ask at the hotel because there is almost no information about the show on the internet. 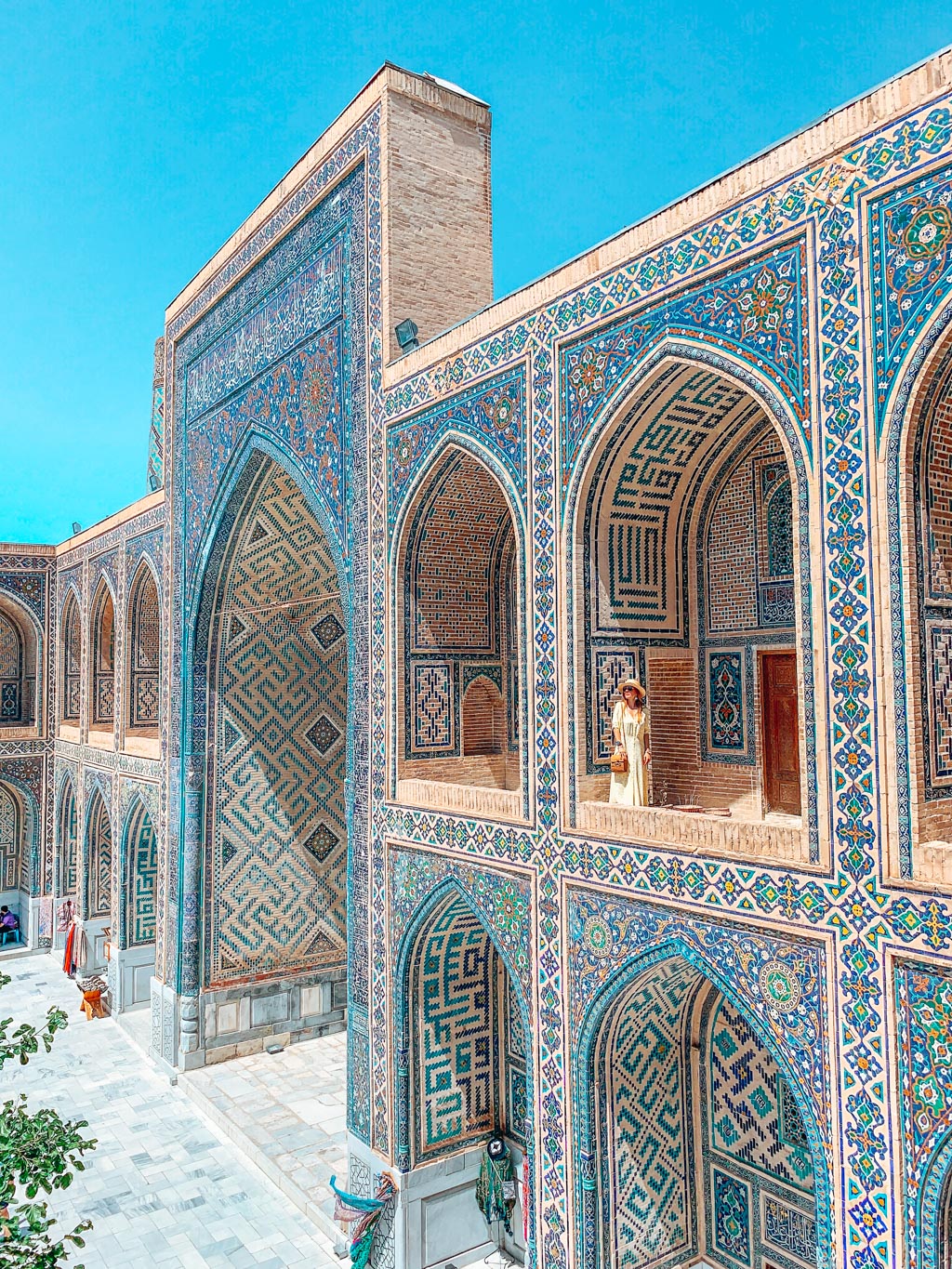 Just 10 minutes walk from Registan Square is this Mosque. Its construction ended before the death of Emperor Timur/Tamerlane and should have been the jewel of his empire. At some point, it became the largest mosque in the world. 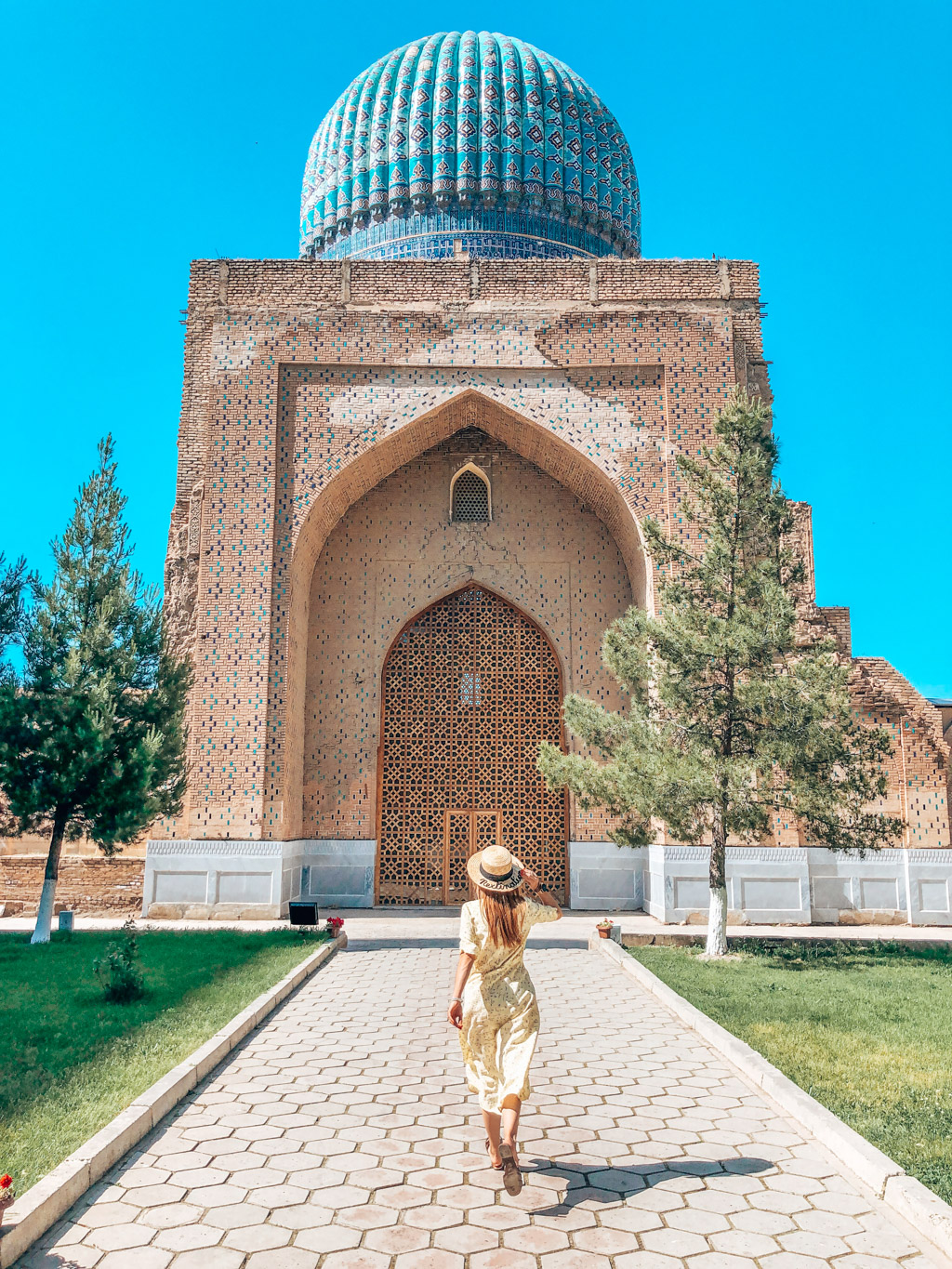 Together with Registan Square, it was what I liked the most. It is a complex of funerary monuments. Its name means “Tombs of the Living Kings”. Some tombs are dated from the ninth century.

The architecture here reaches its maximum splendor, domes of blue tiles that shine under the sun, golden and blue mosaics and muqarnas in the vaults. That is why it has been declared a World Heritage Site by UNESCO.

The Mausoleum is very much worth it. Not only the exterior is spectacular with those facades and domes of blue and gold tiles, but inside, it houses the tomb of Tamerlane, which is truly impressive.

The entire mausoleum is a dazzling example of architecture and its interior is decorated with semiprecious stones and gold. 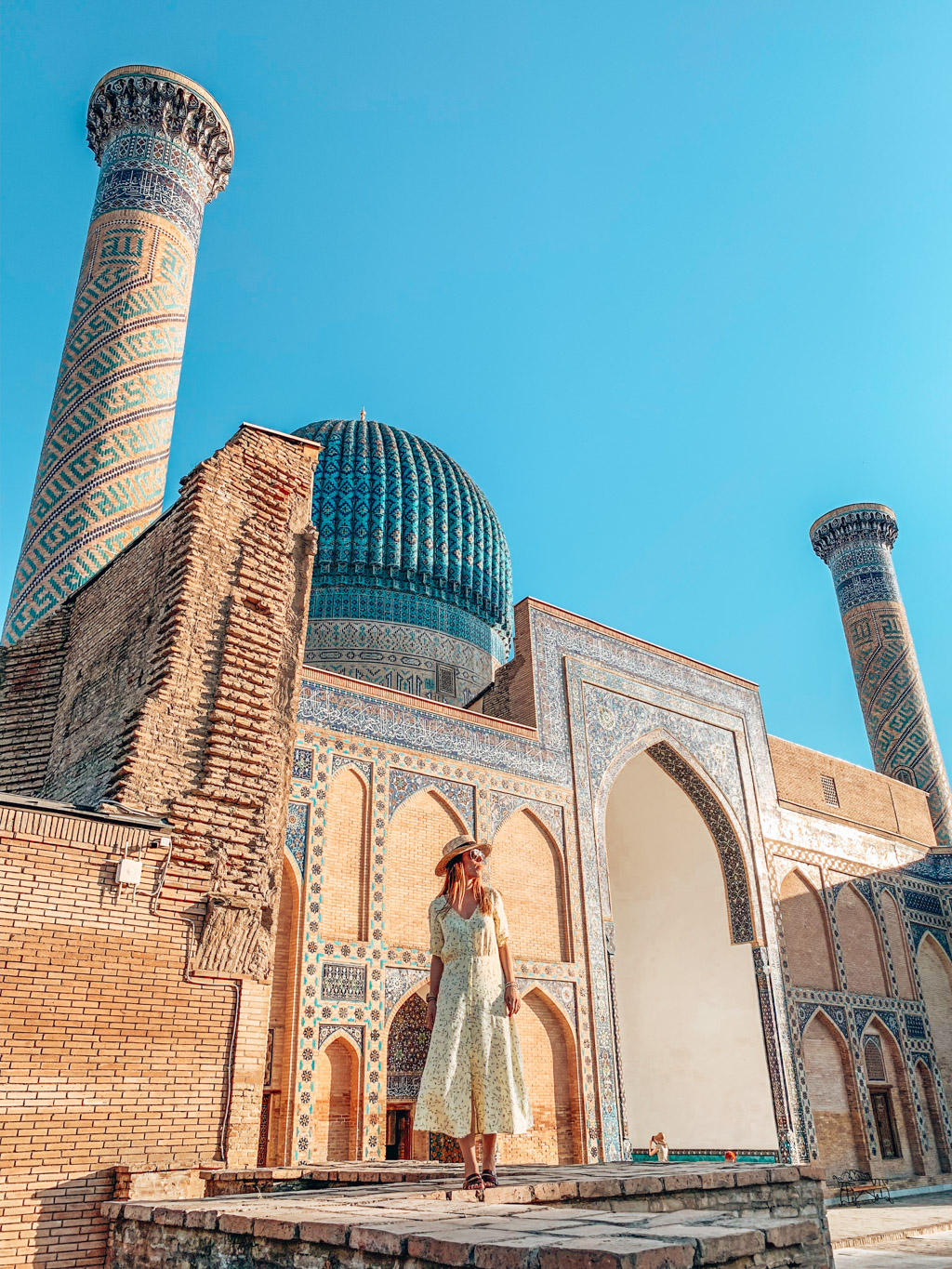 Ulugh Beg was very was notable for his work in astronomy-related mathematics. He built an observatory, where he worked while developing his map, a star catalogue consisting of 1018 stars.

“Ulugh Beg determined that a year has 365 days, 6 hours, 10 minutes and 8 seconds”. His theory was tested and it was determined that he was wrong only in a minute and a few seconds. It was considered the finest observatories in the Islamic world at the time and the largest in Central Asia.

Near Samarkand is the archeological site of Afrasiyab, a precursor city of Samarkand that was founded in the seventh century B.C. Today it is a mountainous mound where excavations uncovered the now famous frescoes.

There is a museum next to the archaeological site that can be visited.

The name Afrasiyab refers to King Afrasiyab, but in reality it was the settlement of the ancient city of Samarkand, in the pre-Mongol period, that is, from the 6th century BC until the destruction by the Mongol troops in the 12th century A.D.

Here, you will find several stalls selling local food, sweets and above all, spices and nuts. 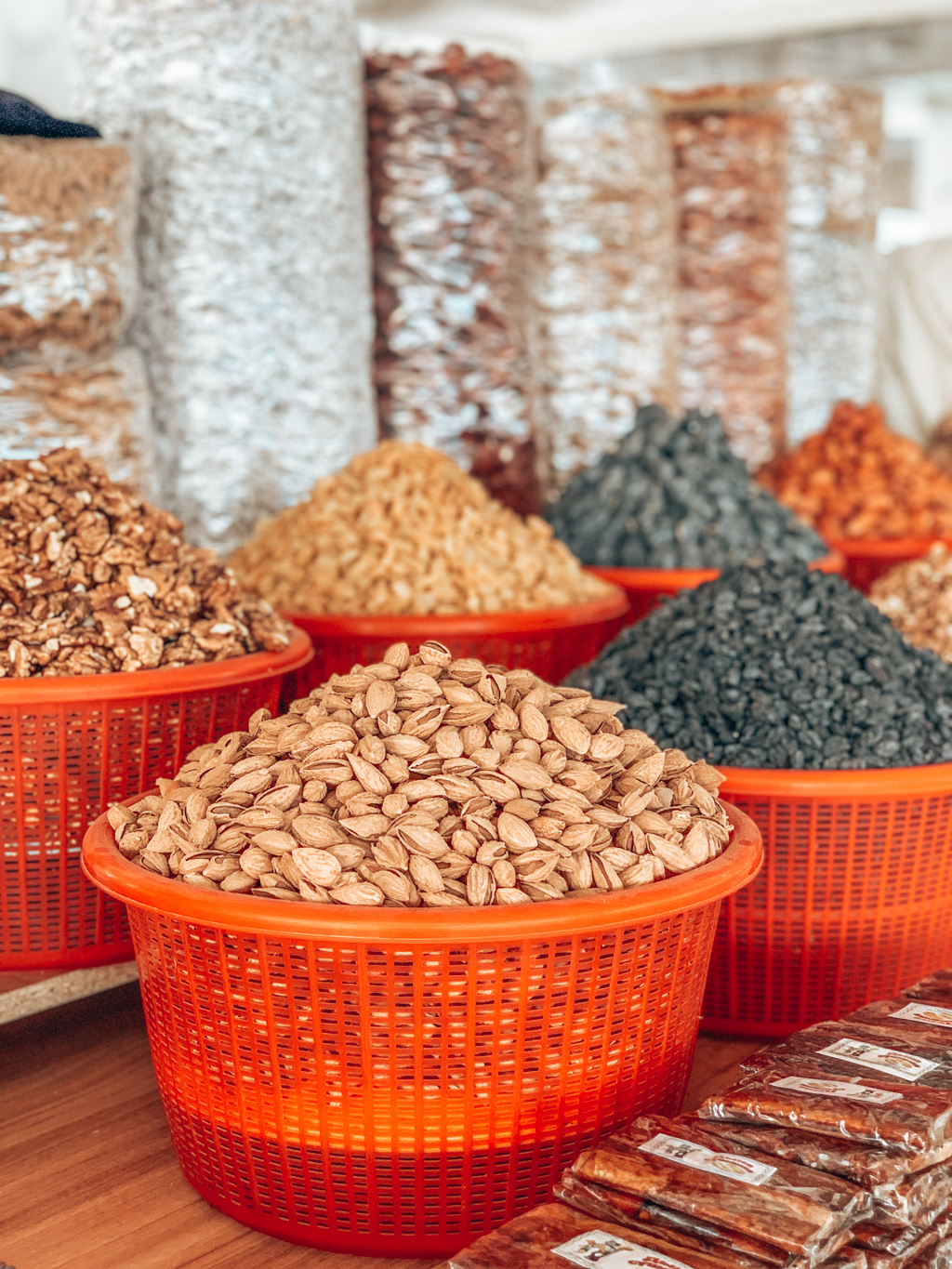 If you have extra time you can also visit these other less known and smaller but equally beautiful sites:

Personally, Uzbek food was familiar to me before I went, because there are many Uzbek restaurants in Moscow due to the large number of Uzbeks living in the city.

Keep in mind that you won’t find pork here because Muslims don’t eat pork. However, regarding alcohol, I was surprised that you can find beer in all restaurants.

The 4 stars hotel is beautiful.  It seems to be very new. It has a large garden and terrace where they serve breakfast in the morning. Very well located, next to the Gur-e-Amir Mausoleum and 15 minutes walk from Registan Square. I totally recommend it. 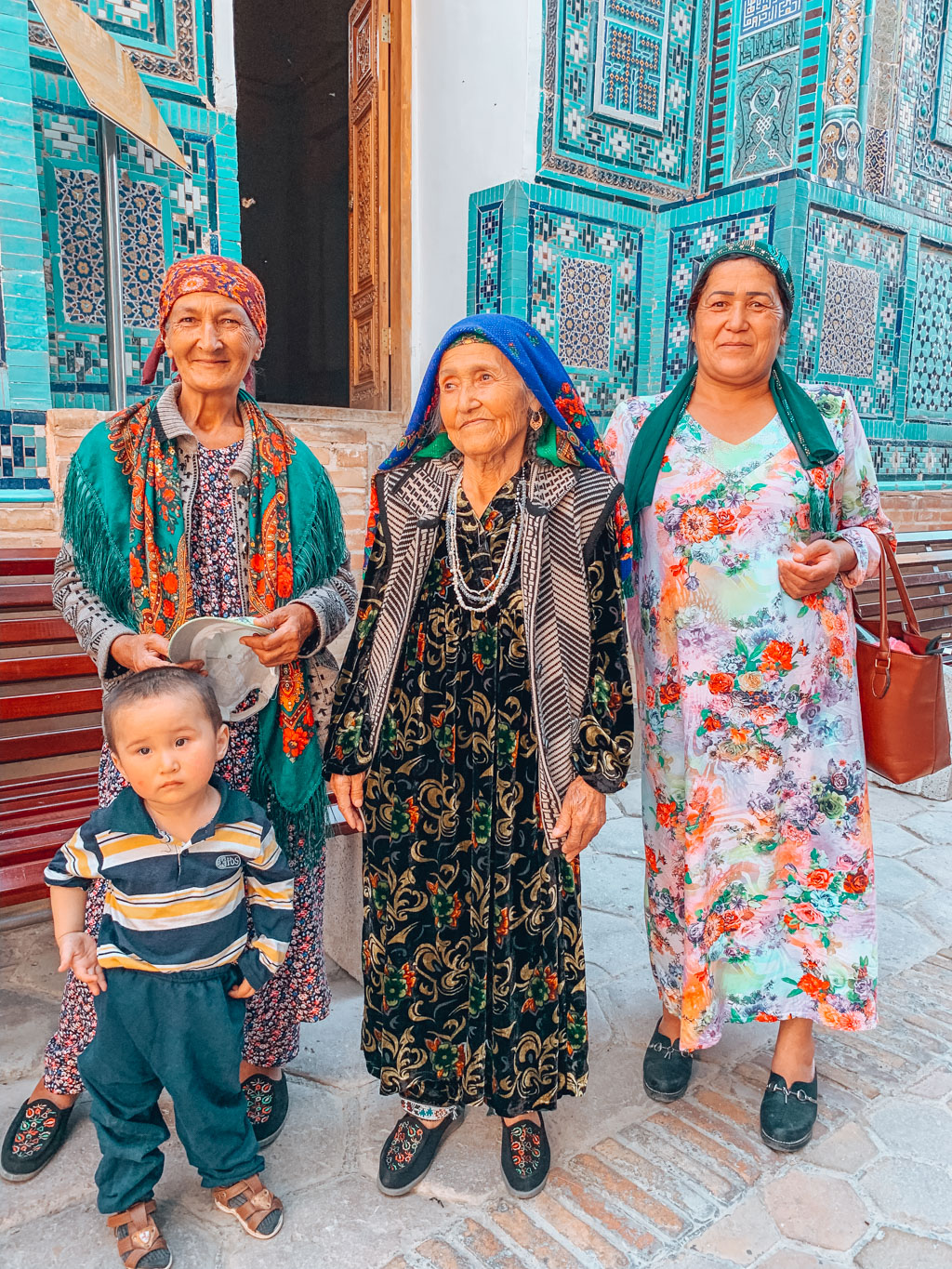 I hope you found this post with the Samarkand Travel Guide and all locations very useful.

Have you been to Samarkand?

If so, let me know in comments. 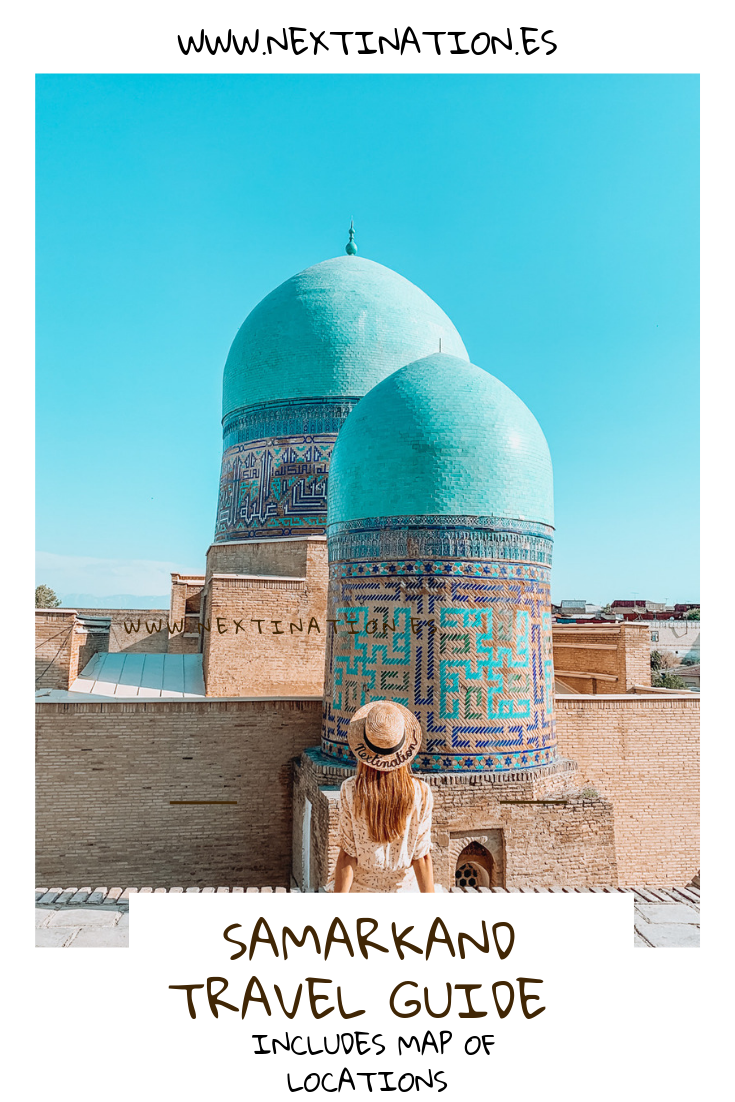