In this post I will explain in detail the itinerary and the travel guide that I propose for your next trip to Uzbekistan as well as basic but important things: how to get around, how to get your visa, how many days to go, etc.

In short, I hope you find this travel guide and itinerary useful.

In my case, I have to say that some years ago, I knew almost nothing about this country. It was as a result of moving to Moscow almost 5 years ago (time flies!) when I started to hear more about Uzbekistan because, above all, there are a lot of Uzbeks living in Moscow.

As a frequent traveler, I can say that being traveled to very popular places, I want now to explore less known and, therefore, less crowded places and Uzbekistan, at least, for now, it is the perfect place for that. 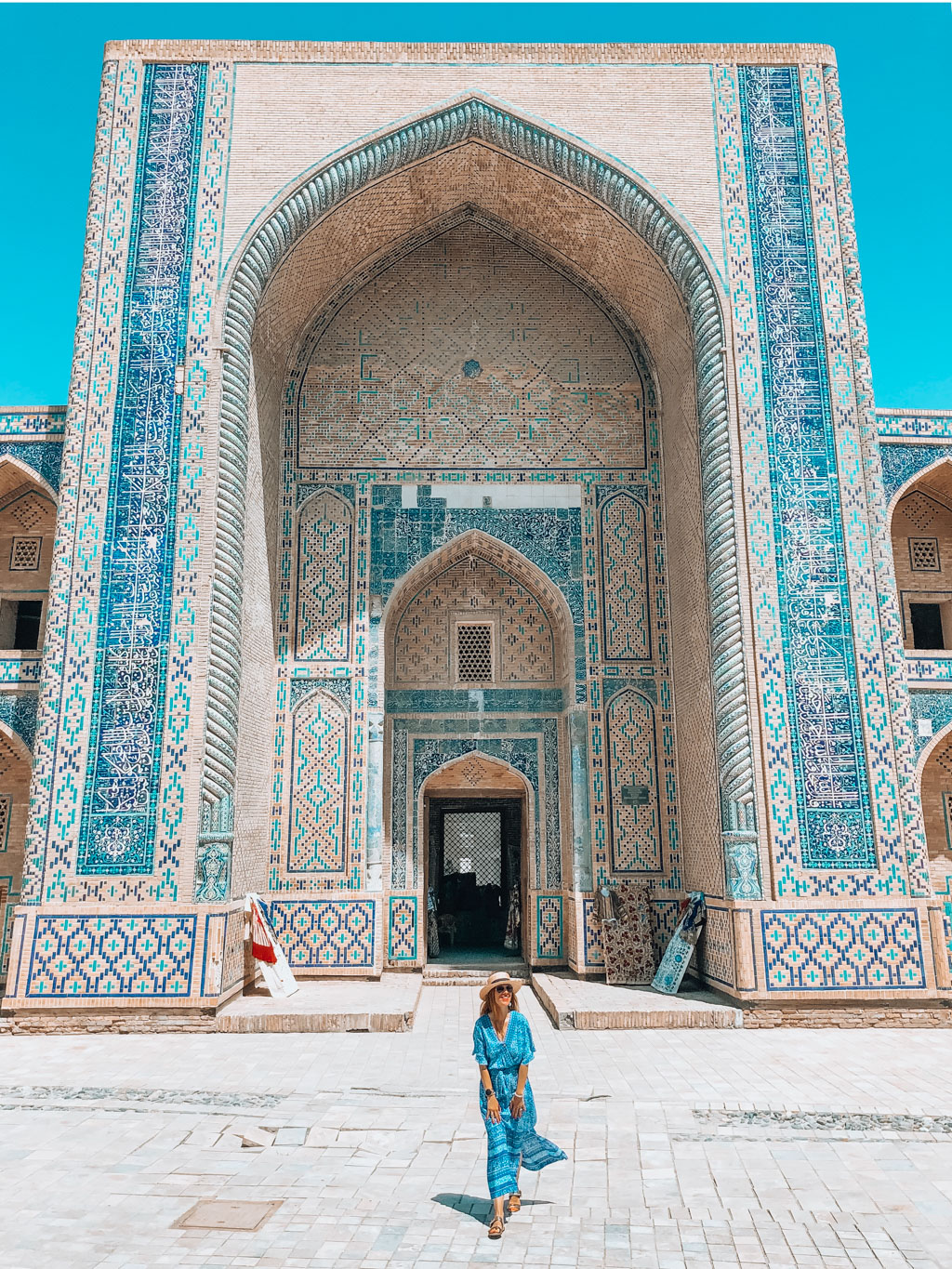 Brief Introduction and the Silk Road

Uzbekistan remains almost intact. Once here, when you walk through their madrasahs, mosques and square, it seems that you traveled back in time.

This country, which was part of the Soviet Union until 1991, and before that, of the Russian Empire, is located in the heart of Central Asia bordering on Kazakhstan, Afghanistan, Kyrgyzstan, Tajikistan and Turkmenistan.

Its strategic location made it an obligatory step for the caravans that traded between Europe and Asia along the so-called Silk Road, since silk was the most prestigious merchandise that circulated through it, although not the only one. Its elaboration was a secret that only the Chinese knew.

As the silk industry grew in China, the Persians opened new trade routes throughout Uzbekistan to promote the transfer of goods between both continents. It was not only an opportunity to exchange goods, but also culture, ideas and religions.

Thanks to this, cities such as Samarkand and Khiva emerged to welcome merchants who filled their streets with items brought from all over the world, especially silk, but also gold, silver, precious stones, ivory, glass, perfumes, spices, ceramics. and porcelain.

Alexander the Great was around here and he even married the daughter of the local governor. Also Marco Polo, who became one of the first Europeans who traveled the route to China in the thirteenth century and who documented everything in his book “The trips of Marco Polo.” This book opened the eyes of Westerners regarding Far Eastern customs.

The majority of the population in Uzbekistan is Muslim but they are not Orthodox Muslims as in other countries of Islam so here, you will be surprised at how open minded they are.

Do I need a visa?

Years ago it was very difficult to obtain a visa to visit Uzbekistan. However, today is much simpler. 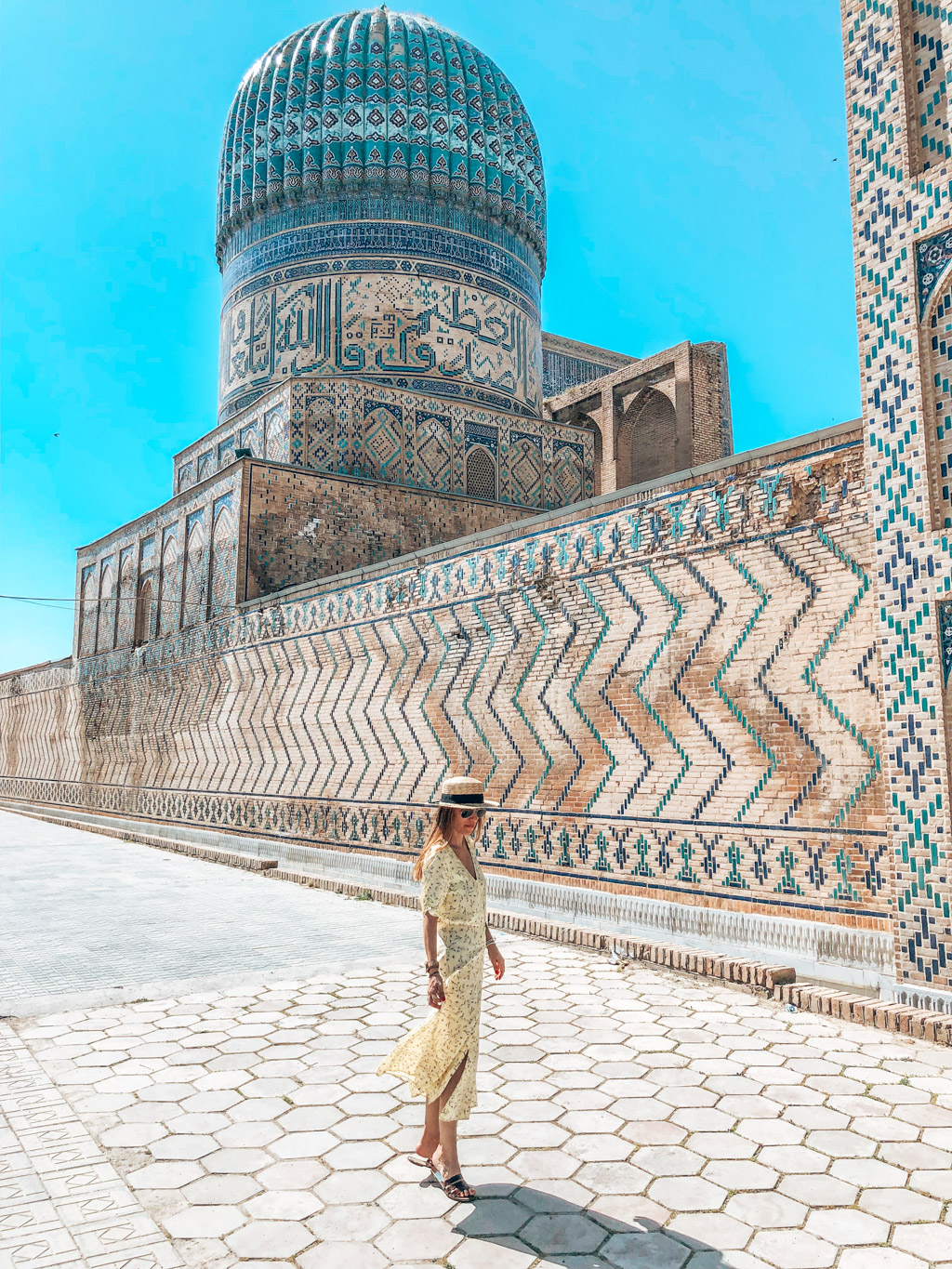 How to arrive and how to move internally?

It depends on the route and itinerary that you are going to do but there is an airport in Tashkent, Samarkand and Bukhara. Khiva does not have one, but Urgench, which is 45 minutes away, does.

If you are going to do the Tashkent – Urgench route, it is best to do it by plane, since these two cities are very far from each other. Between the others, the easiest way is to use the train.

The Uzbekistan Airways company has flights of about 50 euros per trip and takes about an hour and a half.

Among all of the cities, except Tashkent-Urgench, you can move on high-speed trains because the Spanish company Talgo has invested in infrastructure in this country since very recently.

Therefore, what used to be long distances between these cities, now it takes very little if you take the high-speed trains. In addition, ticket prices are very cheap.

These trains cover these distances:

VERY IMPORTANT: Once you know the dates and have the plane tickets, you should buy / book the train tickets as soon as possible because the fast trains have little wagons and they run out super fast. This was what happened to us and we had to make two trips on the other trains, which are also not as comfortable and took twice as long.

To buy / book train tickets I recommend these pages.

Khiva is the furthest city. If you are going to do the Khiva-Bukhara trip or vice versa, it is best to do it by train, which takes about 6 hours.

Unfortunately, we could not go to Khiva, which I think it maybe is the prettiest one. We didn’t  have enough days and, in addition, we made the trip with our 3-year-old daughter so we did not want to extend it much longer because of her.

With this, I also want to tell you that it is perfectly feasible to come here and do this trip with small children (we did it).

The taxi is fine to get around in the city, especially in Tashkent which is the biggest, and also the taxis are quite cheap here.

There are some Apps like Yandex Taxi that work well. You only need a local SIM (read below).

Anyway, in Samarkand or Bukhara you will only need a taxi when you go or come to the airport or train station or when you visit a couple of monuments that are further away from the center. To go to the main places you can go walking as everything is very close. 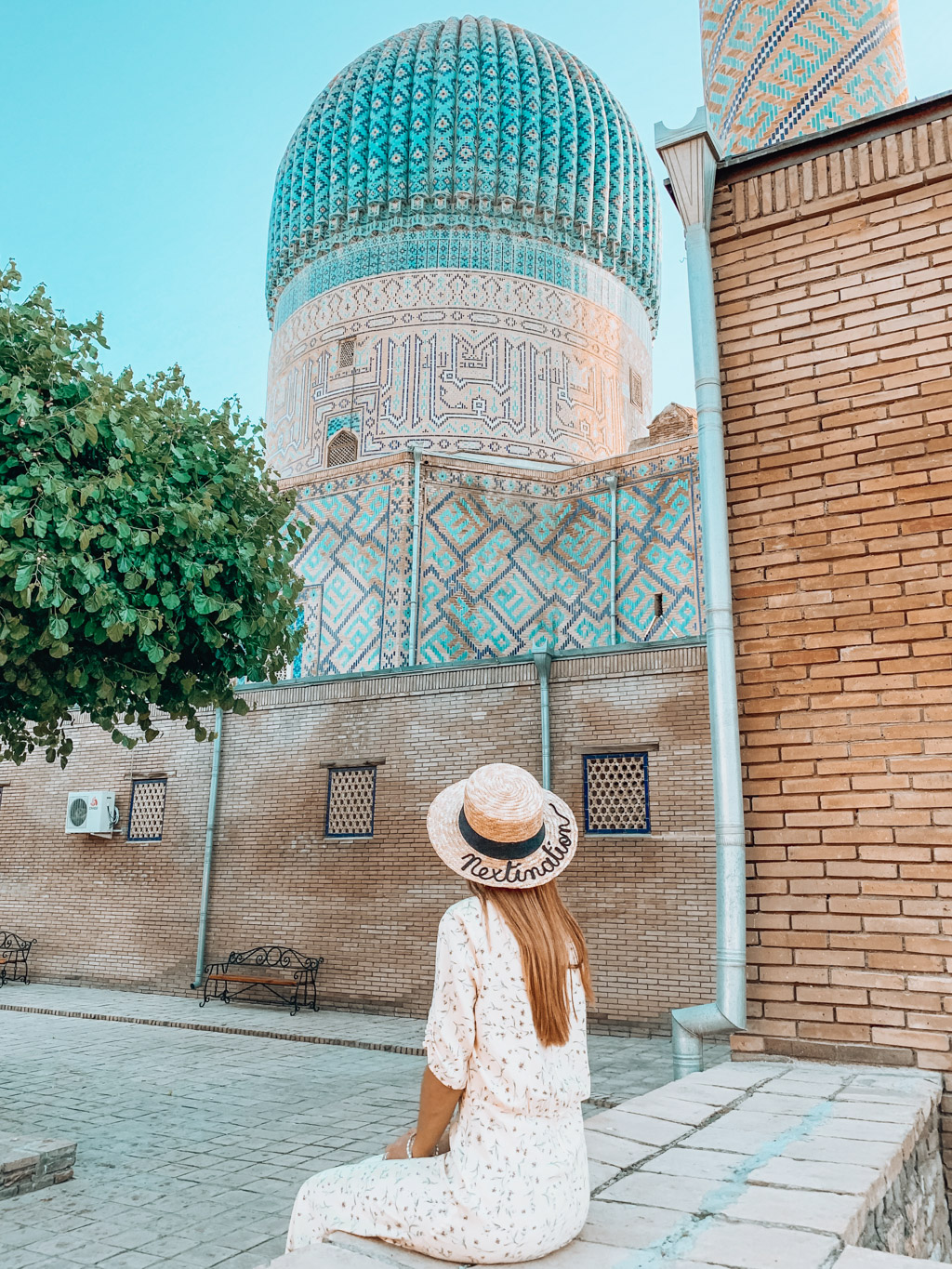 It is best to go in spring or fall. That is, the months of April and May as well as September and October since, in winter, it is very cold and sometimes there is snow and in summer, the temperature reaches 40-45 degrees Celsius so it is way too hot.

We were here at the beginning of May and we had a temperature of about 32 degrees Celsius in Tashkent and Samarkand and 37 degrees in Bukhara.

Itinerary or cities to visit?

If you want to cover the 4 cities, I really recommend you to start in Tashkent and then do Samarkand, Bukhara and ending up in Khiva.

In our case, we only had 5 days so it is perfectly viable to see at least Tashkent, Samarcank and Bukhara in 5 days.

However, if you include Khiva, what you should do, and you want to see everything calmly, I would recommend you to stay in Uzbekistan for at least 8 days. 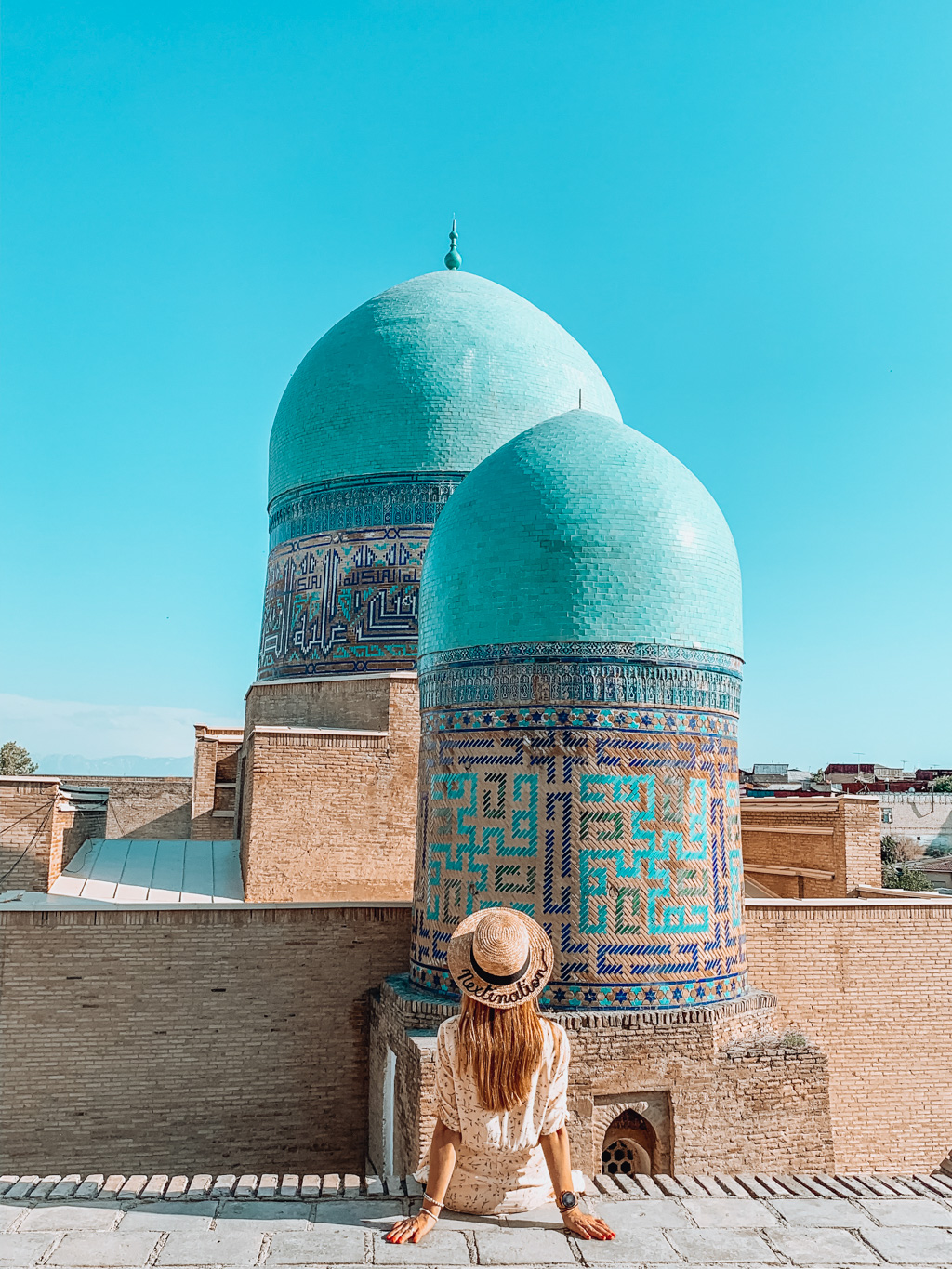 I recommend you to not buy the SIM card at the airport. We had a bad experience. They sold it to us more expensive than in other places and besides, it was not valid for the whole country, it was only valid in Tashkent so when we arrived in Samarkand we were again without data.

The hotels have wifi, but the signal is very weak. 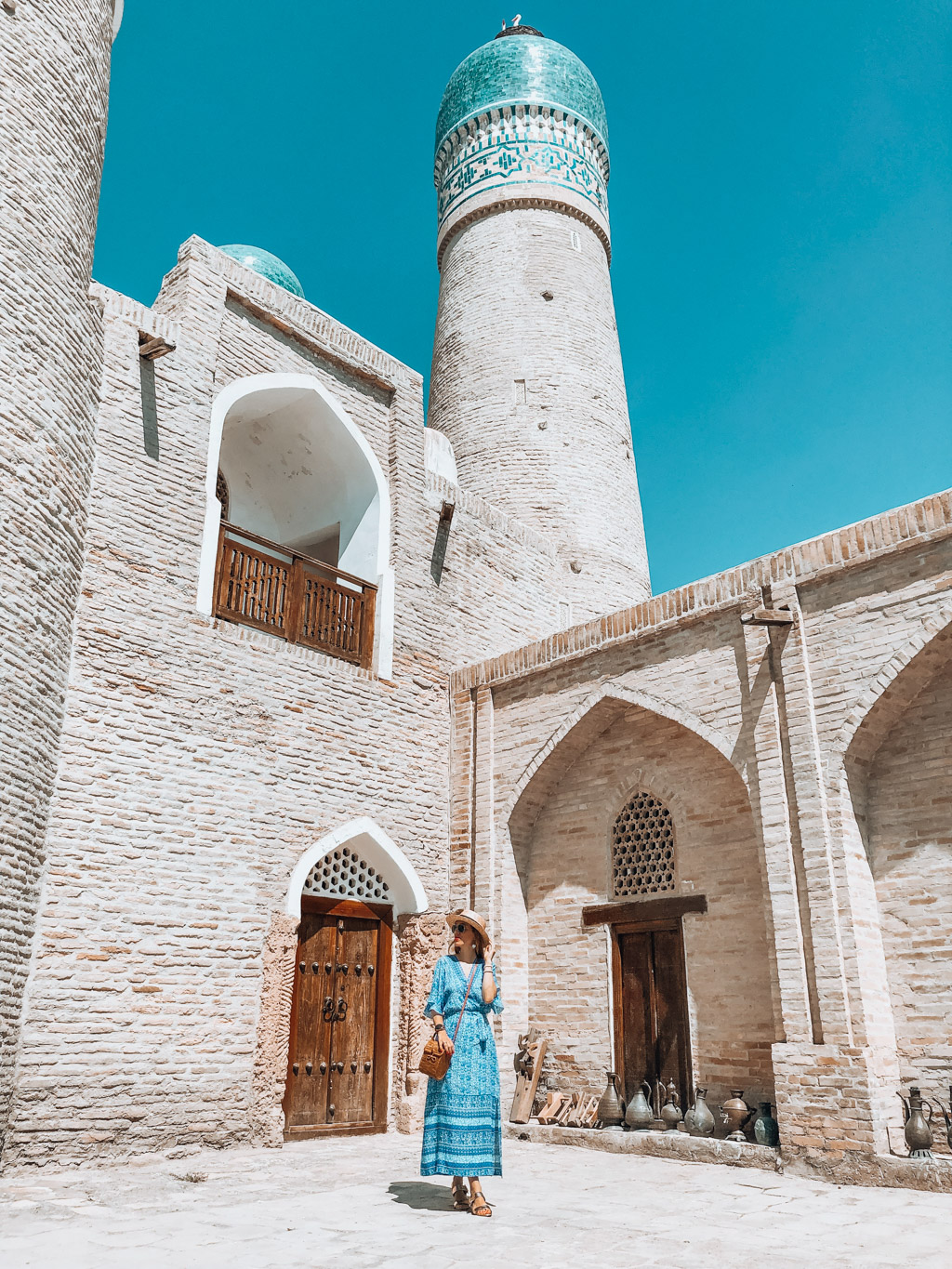 Another information of interest

They speak Russian and Uzbek but in the main tourist attractions there is always someone who speaks some English. If not, you can always use the gestures.

They have the Uzbek Som as a national coin. The change now is € 1 = 9652 sum, so be prepared for, when you change money, having a huge wad of bills. It is better to carry cash because they not always  accept credit cards.

There are some ATMs, especially in Tashkent which is the capital, but not all of them are actually working.

Travel alone or in a group

Many people go to Uzbekistan on trips or organized tours, however, we decided ,even with a small kid, to do it and organise everything by ourselves.

In case you go alone, I mean, without an organized trip, once here, you can hire a travel guide if you wish and at a very good price.

STAY TUNED TO MY NEXT BLOGPOSTS:

I hope you have found this Travel Guide and this Itinerary for your trip to Uzbekistan useful.

Have you been to Uzbekistan or another country on the Silk Road?

If so, let me know in comments. 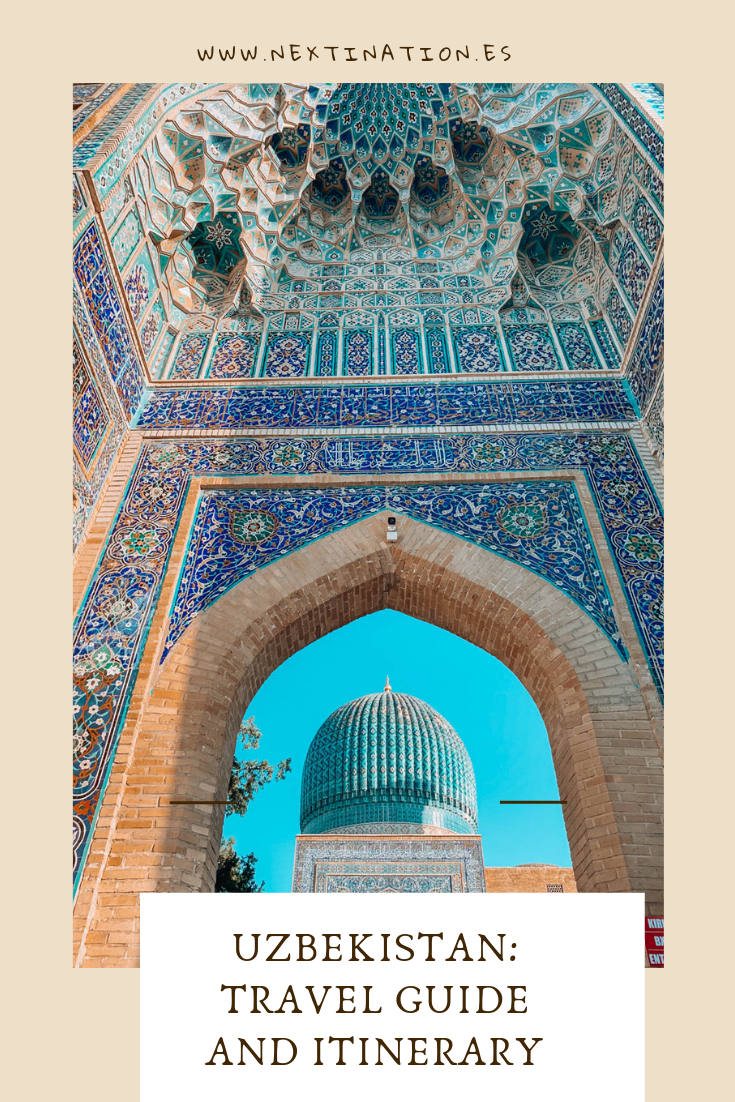 Things to do in Singapore: The most complete city guide

Where to stay? Charming boutique hotels in Bali