Just a few weeks ago I visited Riga for the first time and the city fell in love with me.

I had heard a lot and very good things about this city and I had been wanting to go since I moved in to Moscow almost 5 years ago.

Finally I decided to go and here you can find my recommendations on what to do and see in Riga in 72 hours.

Riga is known as “The Paris of the North” for its culture, architecture and its cute cafes next to the Latvian Seine.

What do we know about Riga? Riga is the largest of the Baltic cities and the capital of Latvia. The other Baltic capitals are Tallinn in Estonia and Vilnius in Lithuania.

A third part of Latvia’s population lives in its capital, Riga.

It was founded in 1201 and is a former member of the Hanseatic League along with other cities such as Hamburg. In addition, the city has been under German, Swedish and Russian control until, finally, it gained independence in 1991.

While it is true that the suburbs of Riga reminded me a lot to  Moscow with a lot of Soviet influence, the old town is a UNESCO World Heritage Site so go prepared to see an impressive Art Nouveau architecture as well as wooden buildings from the 19th century.

They say that it is the city with more Art Nouveau buildings in the World and it´s also a World Heritage Site.

Some things have surprised me while in Riga and are:

What to see in Riga?

Here are the places that I recommend you visiting in the beautiful Baltic city of Riga.

This Lutheran Cathedral is one of the most recognizable sites in the city. Built in the thirteenth century it is the largest medieval church in the Baltic States.

There are usually concerts in the afternoon at a price of about € 10. 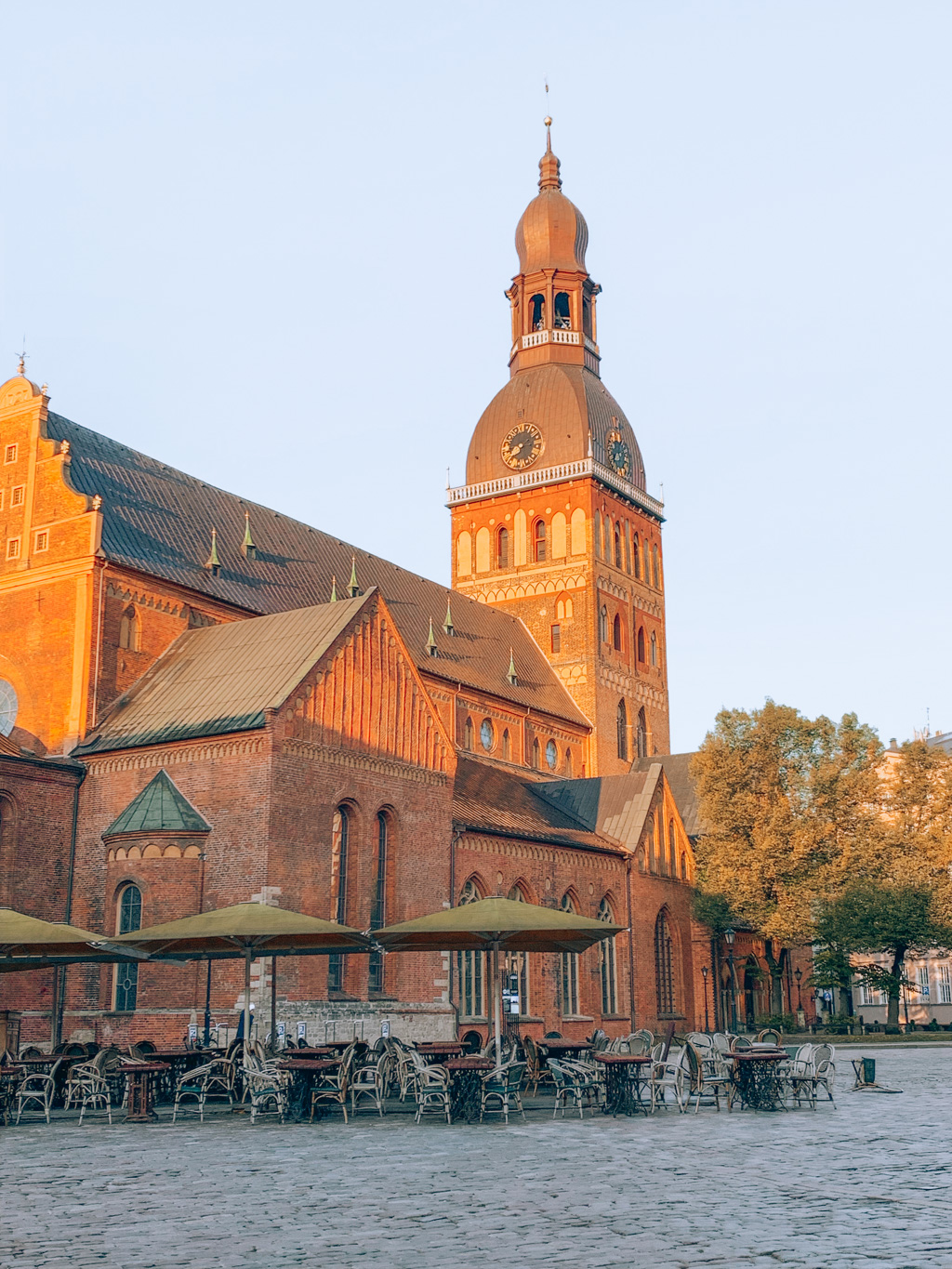 House of the Blackheads

It is one of the most representative buildings in Riga, if not the most.

It was built in the fourteenth century to house the Headquarters of the Brotherhood of the Blackheads, an association of single and rich merchants that emerged in the Middle Ages and still exists in Germany today.

Its wonderful Dutch red brick facade houses the allegorical figures of Neptune, the Peace, the Consensus and the Mercury God representing commerce. Likewise, the image of the Virgin and Saint Mauritius appears, patron of the Brotherhood and which is always represented as a black soldier, hence the name “Blackheads.”

The current building was rebuilt in the 90s. I recommend you to go inside and learn more about the history of this Brotherhood that I found it fascinating. 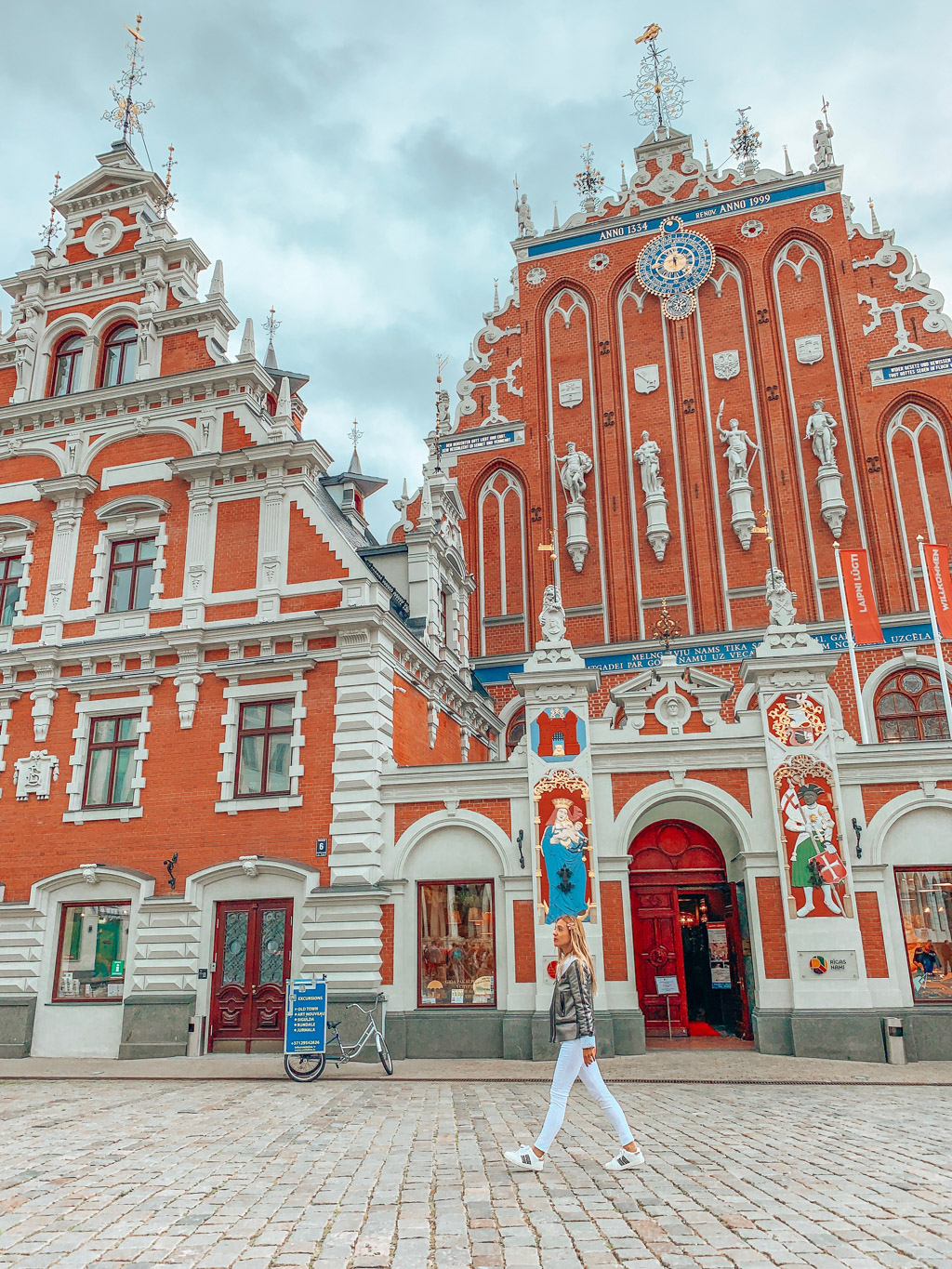 Also Lutheran, like the Cathedral, is one of the most famous in Riga in part because you can climb to the top of its tower and get a beautiful view of the city from its 120 meters high.

Although, originally from the 13th century, it was destroyed almost entirely during World War II and it was finally rebuilt and reopened to the public in 1991.

Admission: € 9. It has an elevator to climb the tower. 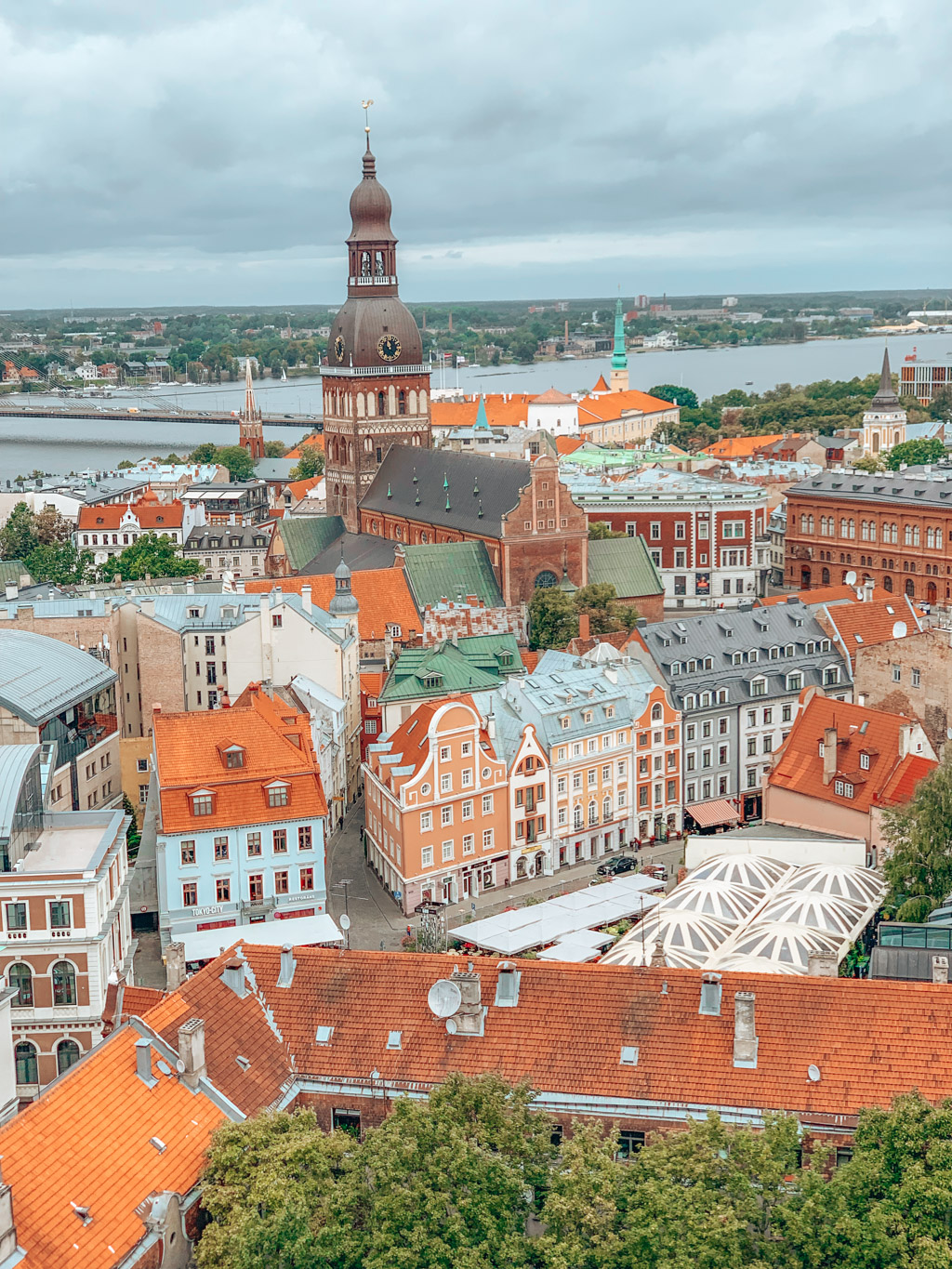 These three houses are the oldest buildings in Riga. 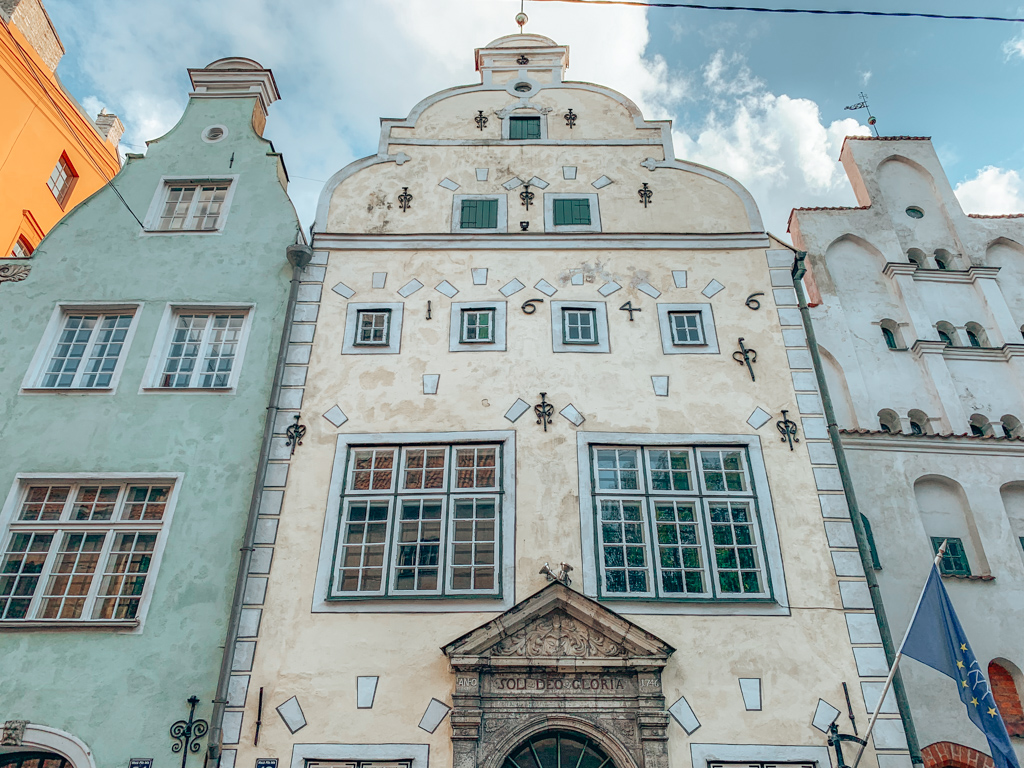 Orthodox Cathedral of the Nativity

Coming from Moscow, it is true that I was not very surprised of seeing Orthodox Churches and Cathedrals because we have a lot in Moscow too.

But it is true that I think they are very beautiful and if you are not used to see Orthodox Churches, you will love it! 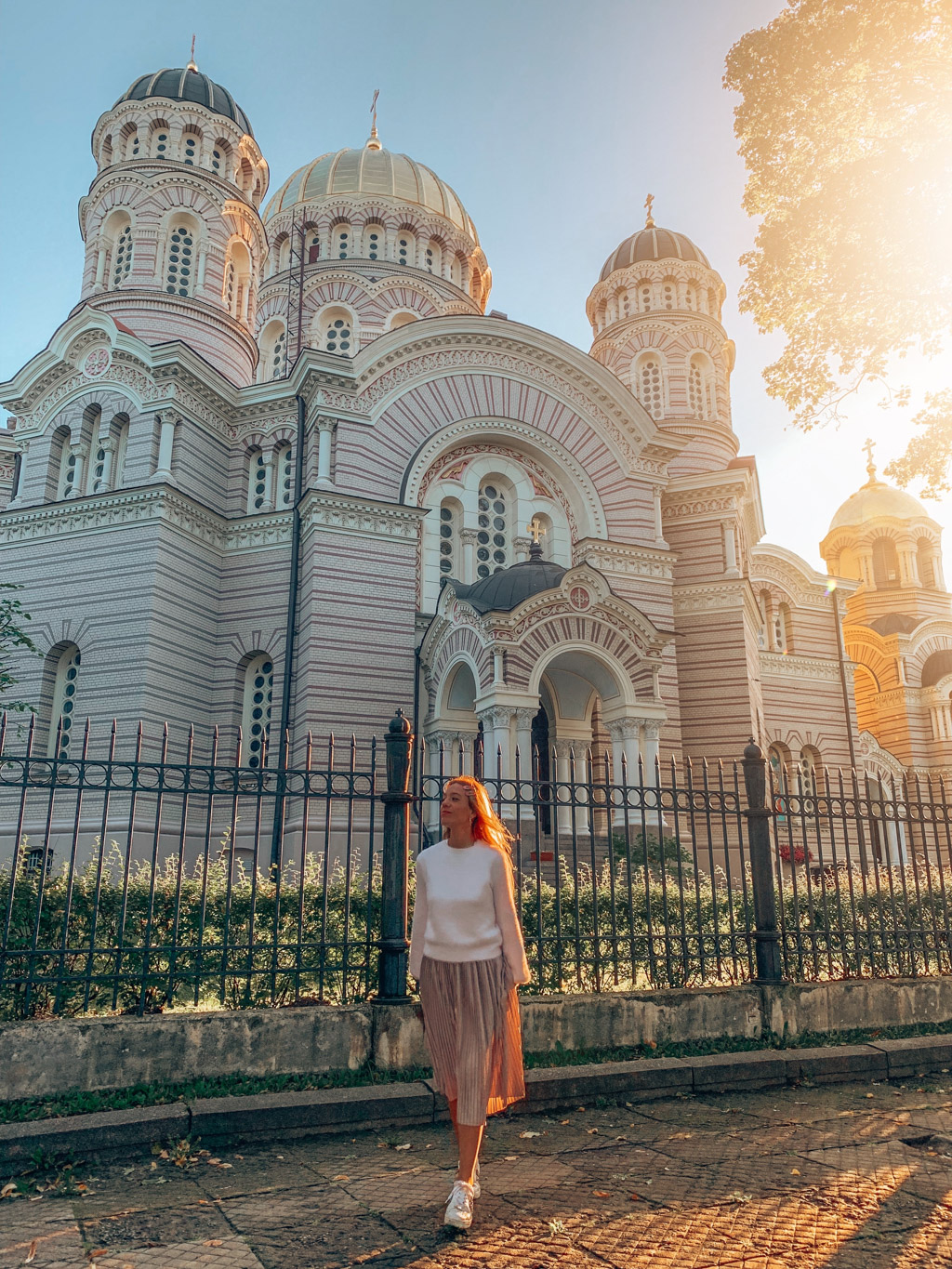 It is the place that I liked most about Riga. It is beautiful and it is the social and cultural center of the city, with many bars, restaurants and cafes.

In September, the whole square was full of outdoor terraces, some covered with tents and equipped with portable heatings, full of people and live music during the weekends.

The surrounding buildings are houses in bright colours. One of those houses, is the “Blue Cow” restaurant, and we were just having lunch there, is one of the most photographed buildings in Riga. The food is delicious and super abundant. 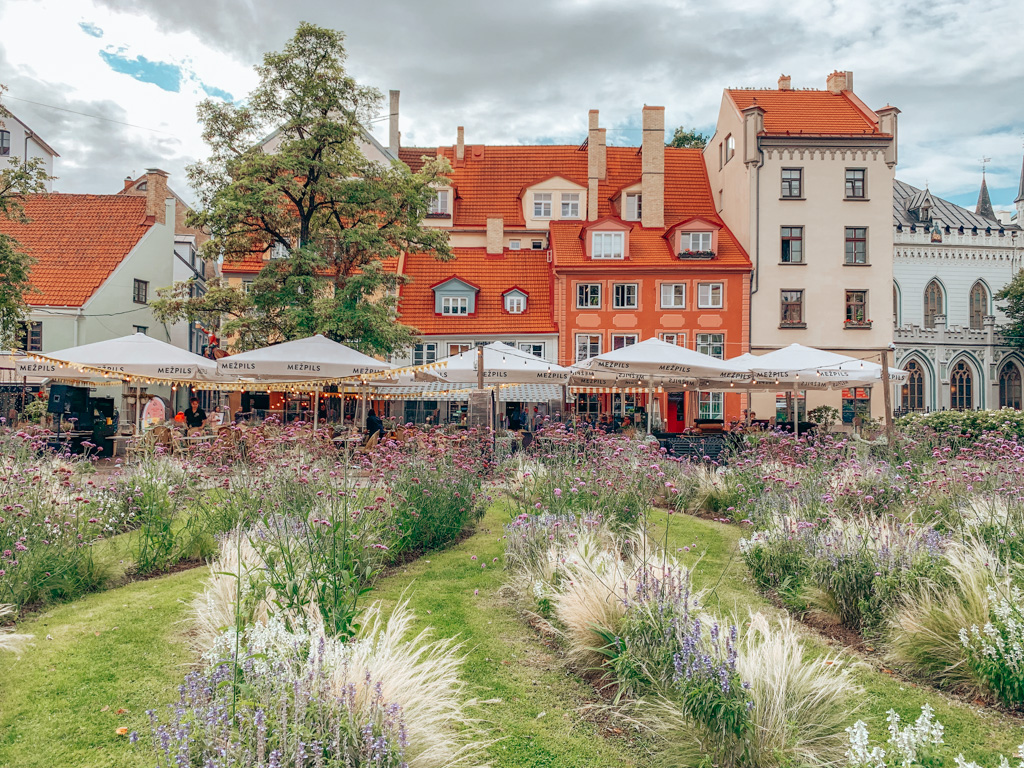 The little guild and the big guild.

In the same square, you will be attracted by this building for its architecture. This is the “little guild” or “guild of San Juan” that was a fraternity of master craftsmen that existed from the mid-fourteenth century until the thirties of the twentieth century.

It is currently used for events, meetings, balls or concerts.

The building of the “great guild” or “guild of Santa Maria” which was the commercial organization of Riga, is located in the opposite side. Currently, this building houses the Riga National Symphony Orchestra.

The best thing in Riga is to get lost in its charming medieval streets, especially these three streets reminiscent of the guilds, with houses painted in bright Colors. It seems that you have traveled back on time.

Here, in addition, there are several of the best restaurants in the city and very cool bars. 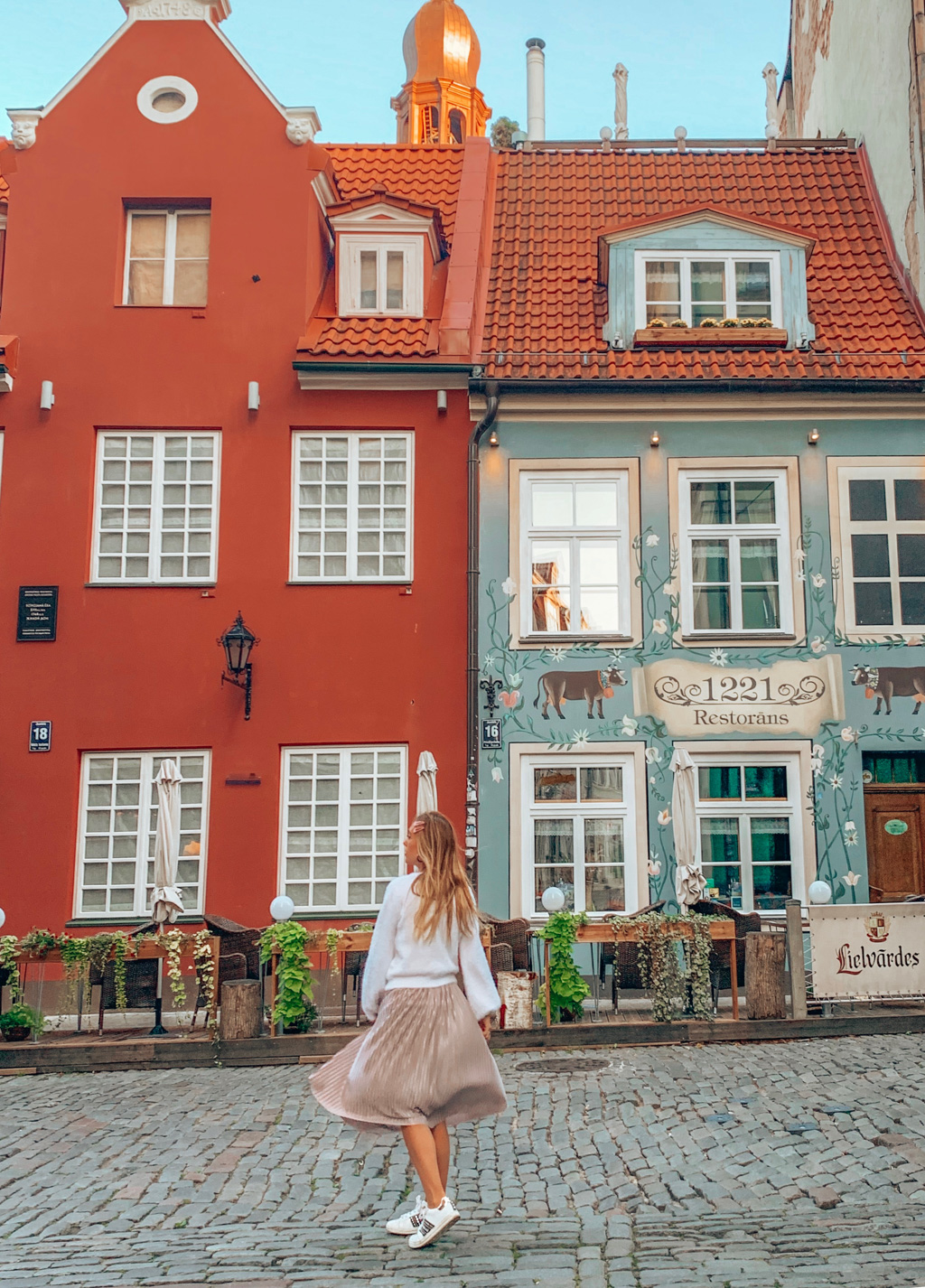 Another street that you can not miss is the Aldaru Iela ((“iela” means “street” in Latvian) where the Swedish Gate is located, the only original door preserved from the old wall. 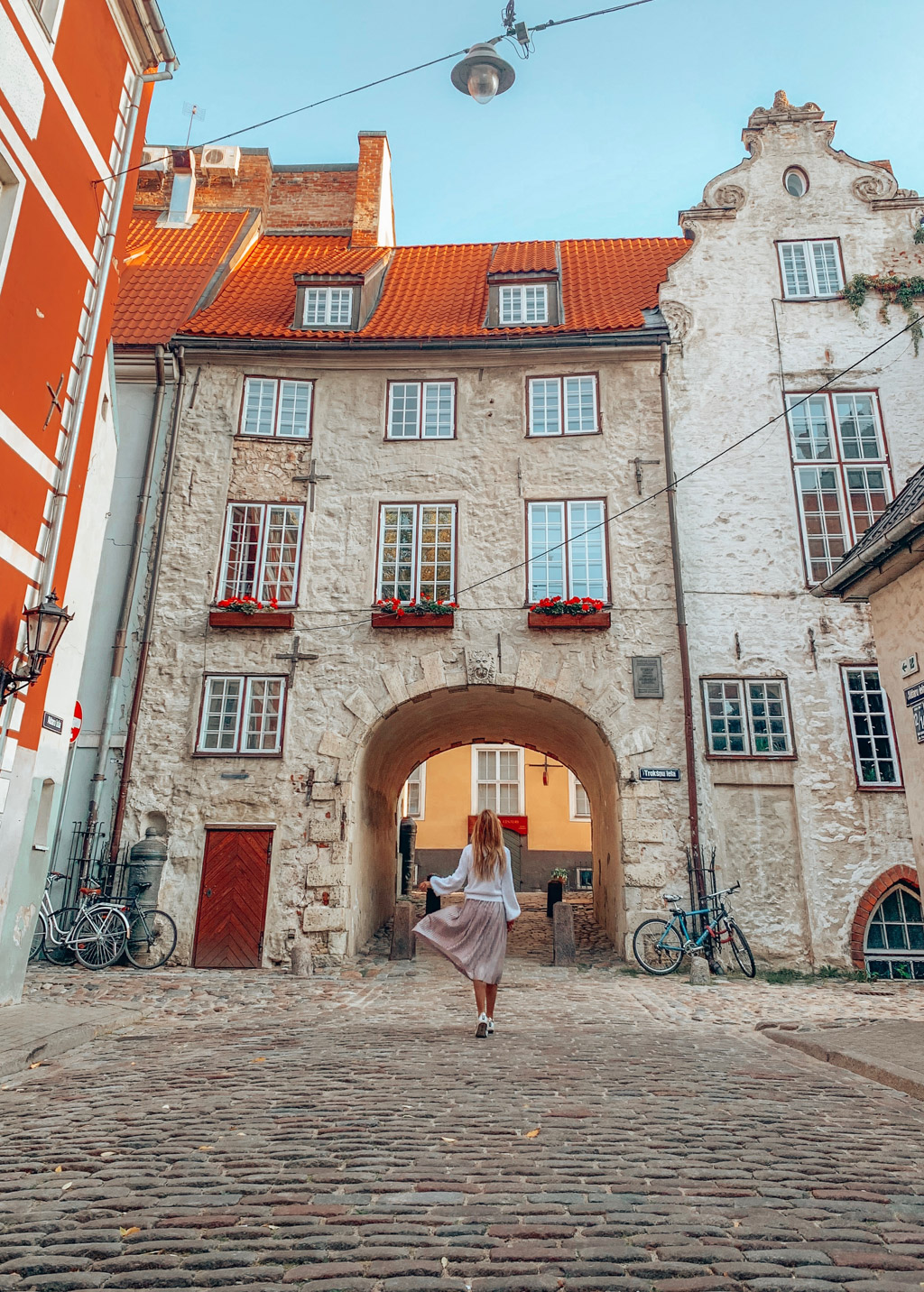 Once you cross the Swedish Gate, you arrive at Torna Iela, and you will see a long building with several little yellow houses. These are the so-called Jacob’s Barracks, some old stores that are currently part of a lively area with cafes and restaurants. 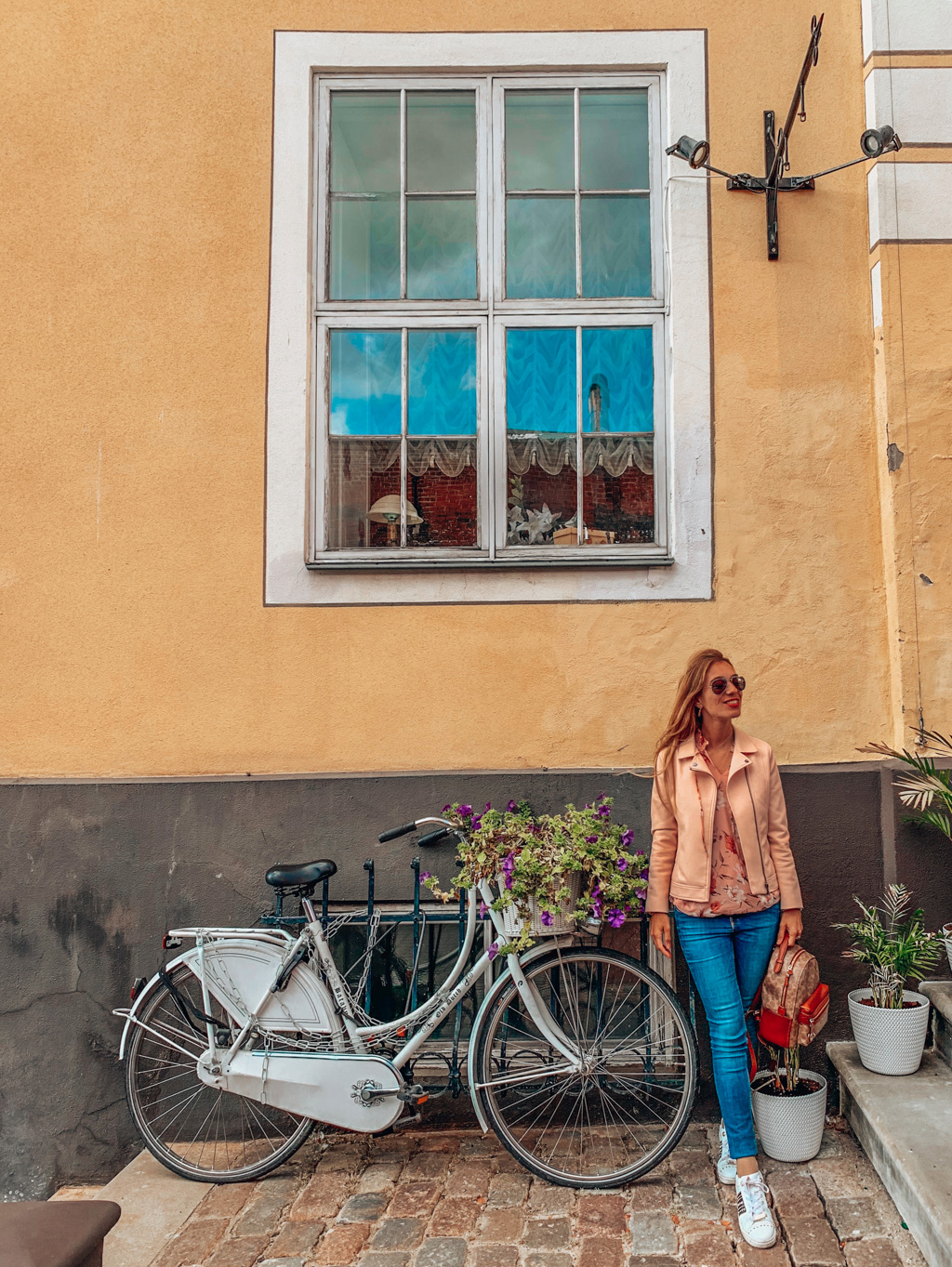 At the end of Torna Iela you arrive at this tower, which is the only one left from the 17th century. Currently, this Powder tower houses the “War Museum”.

One of the most popular parks in the city is the Esplanade.

The truth is that Riga is super green and its parks are very central. How nice it would be to have to go through a park like this one every day!

I especially liked the Bastejkalna park or “Bastion Hill” that extends on both sides of the Freedom Monument. It is beautiful because it also has a 3 kilometer long canal that you can also travel by boat.

Especially in the fall when I went, the parks were beautiful. 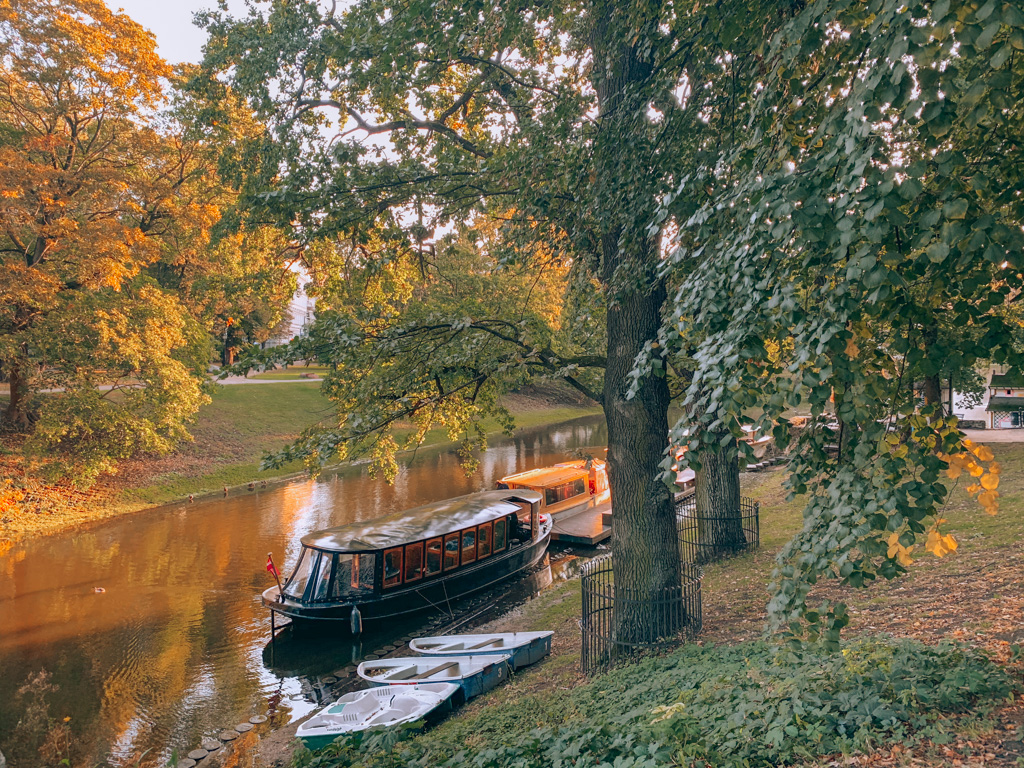 This building known in Riga as “the Castle of Light” was built in Riga in 2015 by the architect Gunnar Birkerst and stands out for its wonderful architecture. 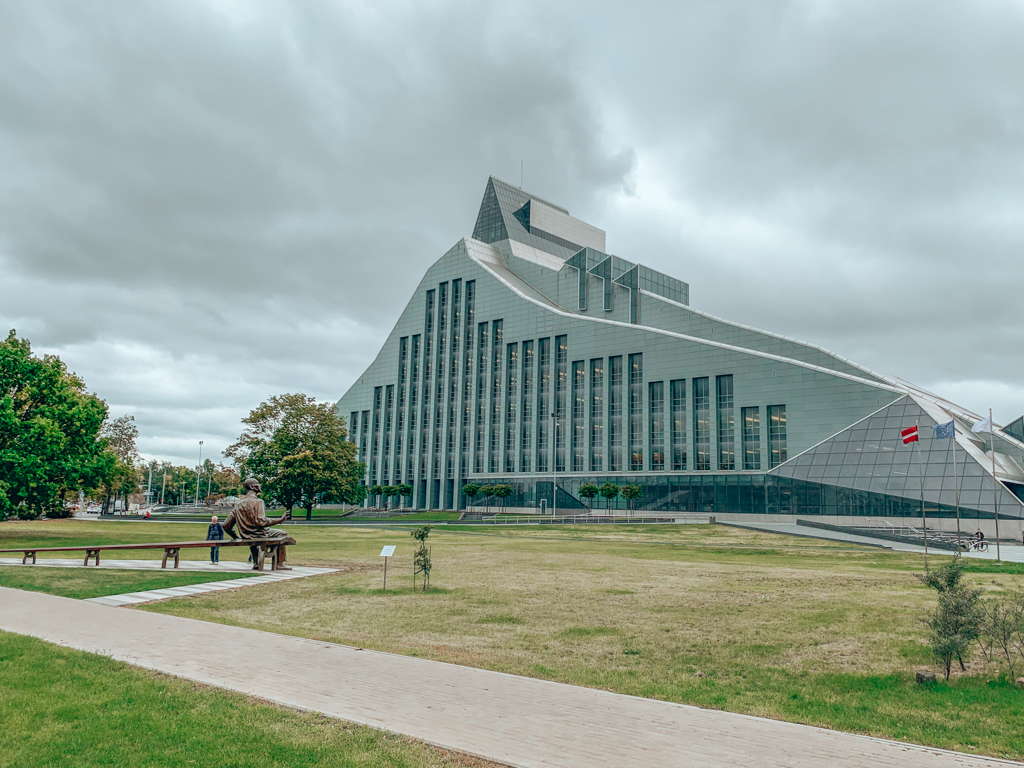 Composed of 5 hangars that were built by the Germans to house the zeppelins, it is today the Central Market. It is one of the largest in Europe and here you can either buy food: fruit, vegetables, meat or fish or even eat here since it has a “food court” with International food.

Of course, the most difficult thing is to find a free place to sit. 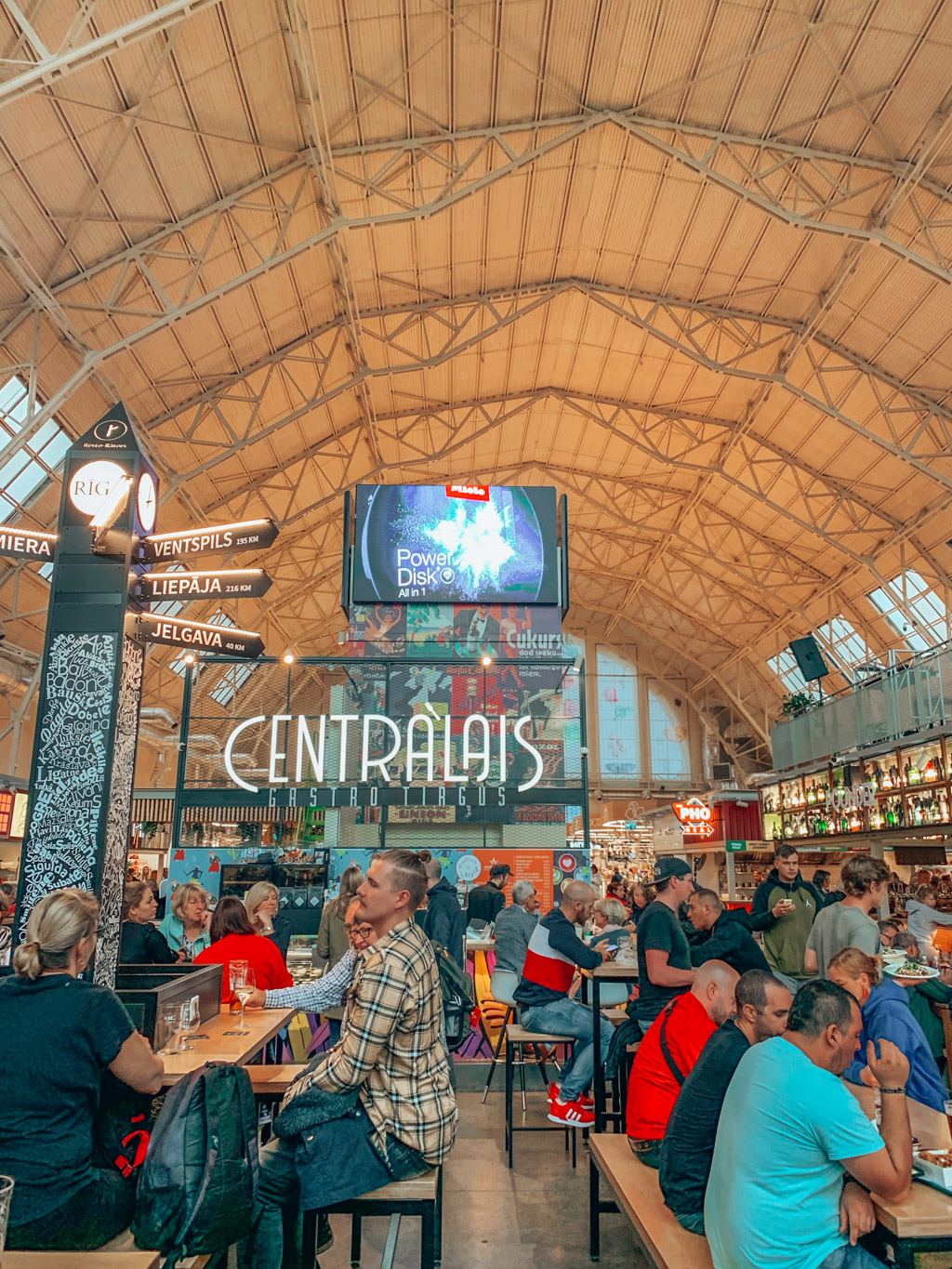 It is a column about 30 meters high that is actually a memorial to the soldiers who died during the Latvian War of Independence between 1918-1920.

You can see guard changes here every hour.

It houses a multitude of shops, cafes and restaurants since 2010. During the months of good weather, the last floor is a huge terrace thus becoming the largest rooftop in the Baltic countries.

There are several restaurants where you can have a drink or lunch / dinner with stunning panoramic views.

In the end we could not have time to visit this Orthodox Church painted in pink. It is located far from the center, but if you have time, I recommend you to go.

Riga has reached our days as the European capital of Modernism.

Between 1899 and 1914, more than 700 buildings were erected in eclectic style and the country’s own styles: National Romanticism and Perpendicular Art Nouveau.

You can not miss Alberta Iela and Elizabetes Iela, the streets that most concentrate buildings in this style.

Alberta Iela number 13 is a 1904 building decorated with female figures that show various emotions and now houses the Riga Graduate School of Law.

In Albert Iela is this Museum, a must see if you are a fan of architecture. 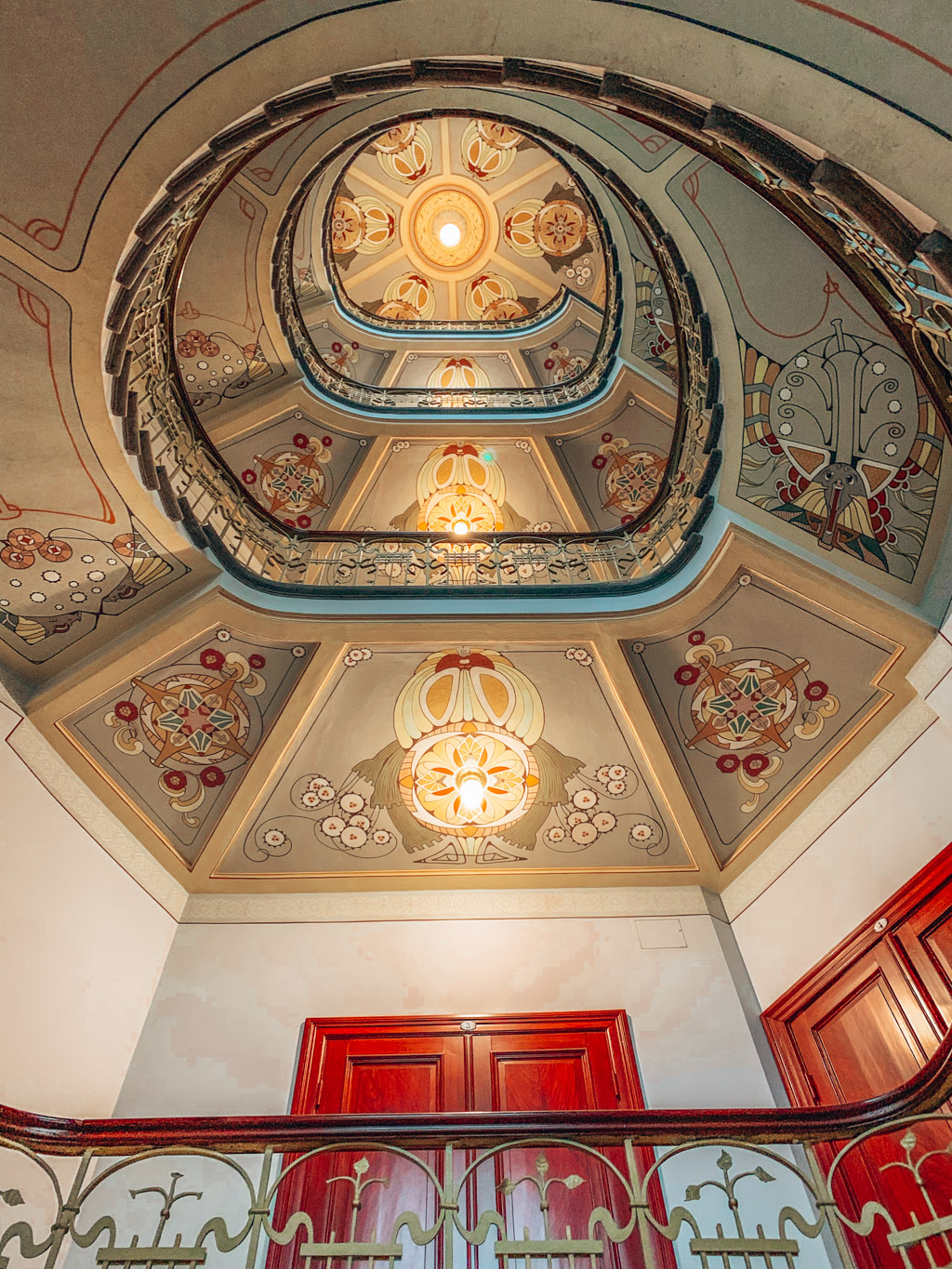 Just 30 minutes by train from the main station, you arrive in Jurmala, known as “the beach of Riga” for being so close and that is really, Latvia is a very small country.

Its beach is very long and it is full of life in summer with many bars and restaurants in the same sand.

In September these places had already closed, but its main street, which is pedestrian, has several restaurants.

Jurmala is also full of hotels with Spas. It is very trendy among Latvians and other people from the Baltic countries to come to this city for a weekend Spa session.

Where to eat or drink?

How to move around Riga?

It is a small city where you can go on foot almost everywhere.

We took the tram a couple of times since we went to see the National Library.

There are several trams that pass in front, the number 1, 2 and 7 and several of them reach the Central Market. The tram driver can be paid in cash.

The Riga tram line has been operating for more than a century.

And you, have you been to Riga or any other Baltic city?

If you want to see more photos of my trips, since here I only put a few, do not hesitate to follow me on my Instagram by clicking here. And you can subscribe to the blog here:

Thank you very much for reading. 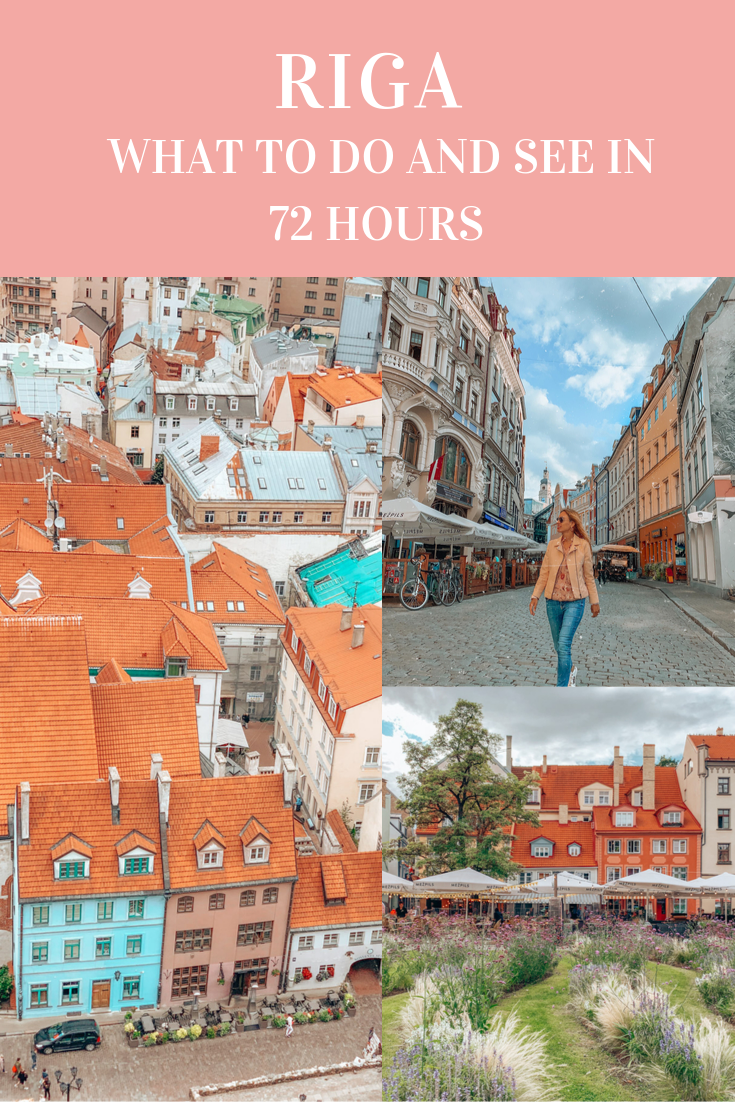