How to Get to Kuala Lumpur 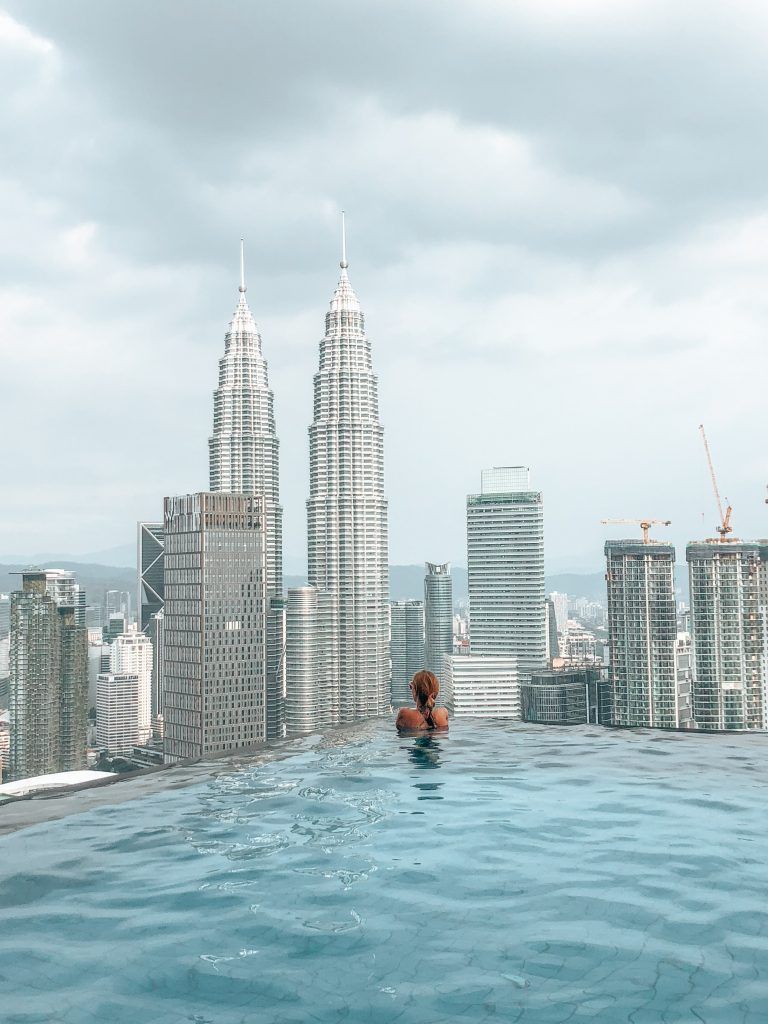 If you don’t live in Malaysia, the best way to get there is by plane. We flew from Phuket with AirAsia, which is one of the most economical companies and also it flies to almost all Asia: India, China, Indonesia, Philippines, Thailand, etc. and also to Oceania: New Zealand and Australia. The flights are really cheap and I have to say that the planes are very good and they give you food even if it is a short flight. For example, from Phuket to KL it was a 2 hours flight and they gave us a big lunch. What are you waiting to book the flight HERE?

To get to the hotel / airbnb we always use Uber because it works almost everywhere in the world and is easy to find drivers and cars. There is also a fast train, the KLIA Express which takes 30 minutes to the KL Sentral station.

We stayed at the Impiana KLCC and we would definitely stay there again if we return to Kuala Lumpur. Have you seen the views from our room?  Make your reservation right now here

.You can see the our experience in the Impiana hotel in the Post Here. 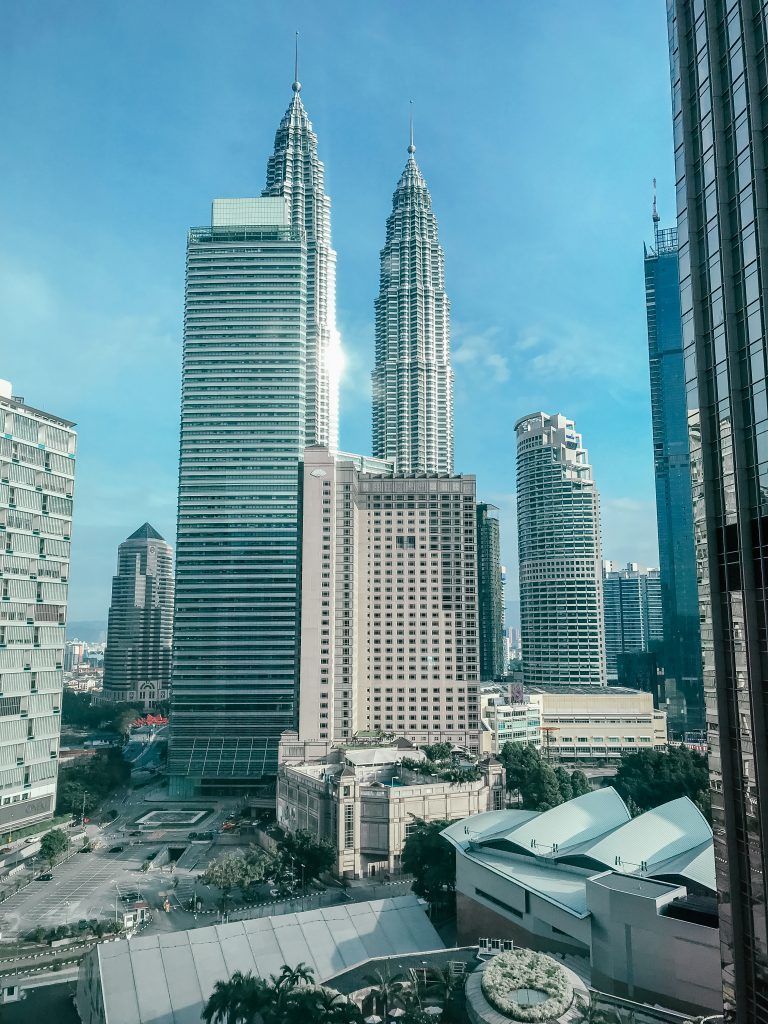 It is the most famous square in Kuala Lumpur. Literally, Independence Square, since it was here where the British flag was lowered for the first time and the Malay flag was raised back in 1957 and here is also where the National Day parade takes place. Around this square are government buildings such as the Ministry of Information, Communication and Culture of Malaysia. Also, the Royal Selangor Club, which was founded in the late nineteenth century as a meeting place for high-ranking members of British colonial society.

Also in the square is the old National History Museum, which used to house a large collection of historical objects. Besides this building, it is the Kuala Lumpur City Gallery that tells the story of Kuala Lumpur through miniature models. To the north is the Anglican Cathedral of Saint Mary. Not far from the square is the original Kuala Lumpur train station, which is still in operation and is one of the most beautiful buildings in Kuala Lumpur.

The truth is that the architecture of the whole street is very beautiful and you can notice that it is one of the most tourist sites due to the large number of buses and tourists you will find in the Plaza. 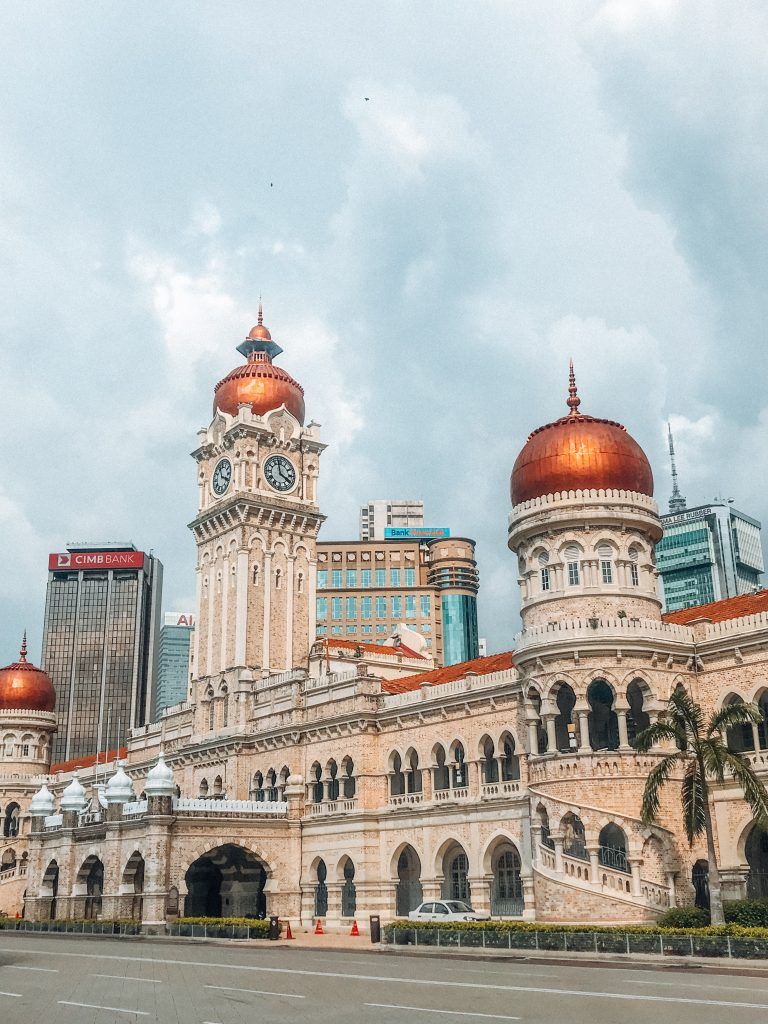 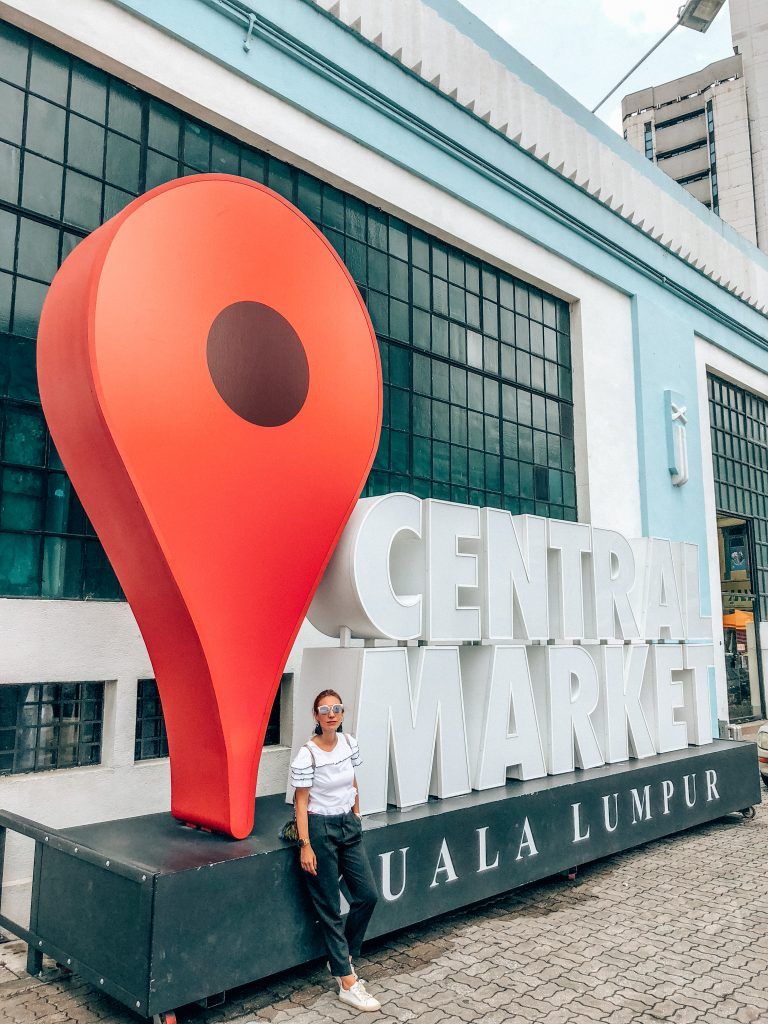 In this street, the first stop is the Central Market or Pasar Seni. This art-deco building is now a bustling craft market on the ground floor with items from Malaysia, Thailand and Indonesia. The truth is that I was surprised what you can find because they are really quality products like batik, masks, furniture, bags, Asian decoration objects, candles, sculptures, etc. But you also find souvenirs and on the first floor there is a food court.

Kasturi Walk is a covered outdoor flea market that is located along Jalan Kasturi, a street parallel to the Central Market.

Here, you will find local snacks and vendors selling fake branded handbags, watches, t-shirts, flip flops as well as fruit stands. It is similar to Petaling Street, but not as crowded. Along the street there is a very curious structure to protect people from the sun / rain.

Although Kasturi Walk does not have as many merchants as Petaling Street, the products are reasonably priced. I loved the buildings here, very colorful and with a beautiful architecture as well as the atmosphere of the street with food stalls, bags etc. The stands you will find them daily from 10:00 – 21:30. 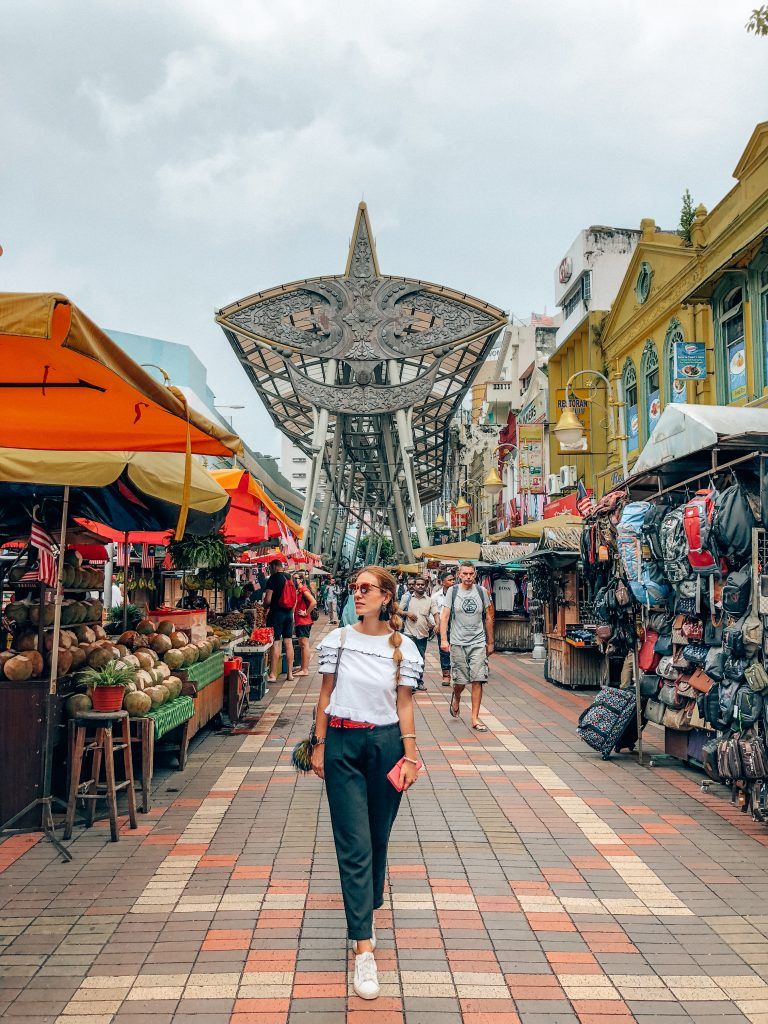 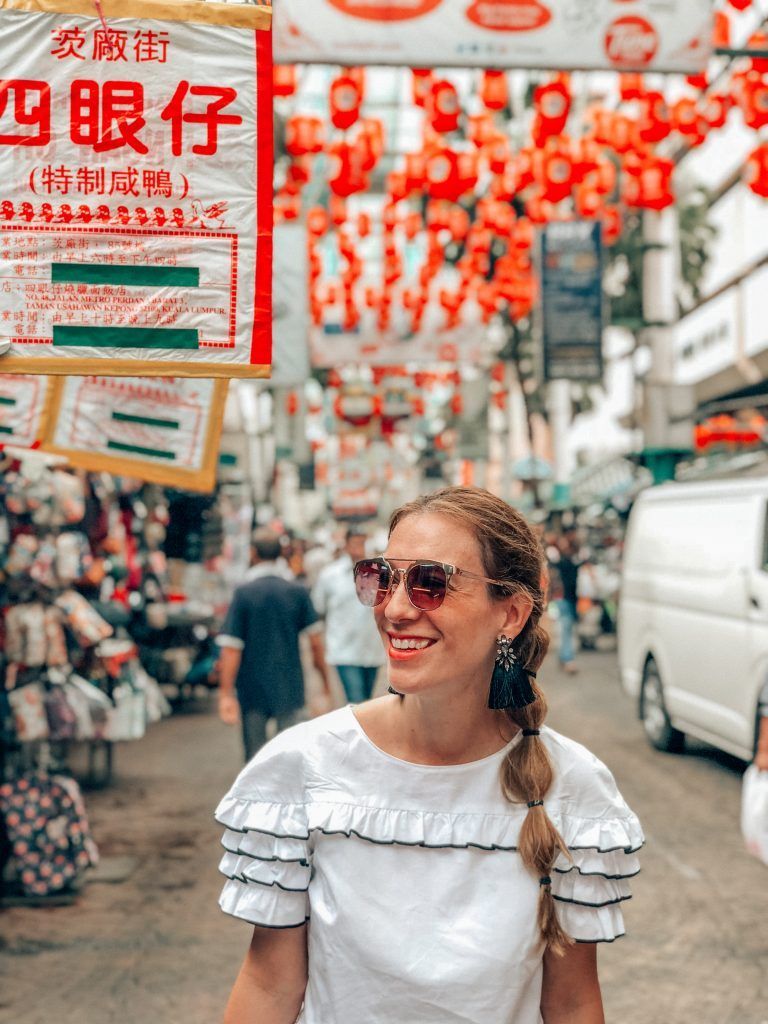 Near the Central Market is located Petaling Street (Jalan Petaling) in the heart of Chinatown. This is the antithesis of the high-end shopping centers of the Golden Triangle of KL, filled with fake products of reasonable quality at near-genuine prices. Haggling is possible, but it is not always a big success, so it’s better to just walk around and enjoy the sights.

After living in China it is true that this street did not surprise me so much, however it is very beautiful full of red lanterns and it brought me so nice memories while walking here. I recommend it for a walk in the morning during the week since there were not many people.

This street is full of shops and stalls that sell products and food. A sign warning against the sale of imitation products provides an interesting contrast, even ironic, as the entire street is practically full of fake branded items. Bags, watches, trainers, clothes, whatever, they have it. Louis Vuitton is next to Rolex, and sometimes you can get the latest movie releases at less than 10 RM each. 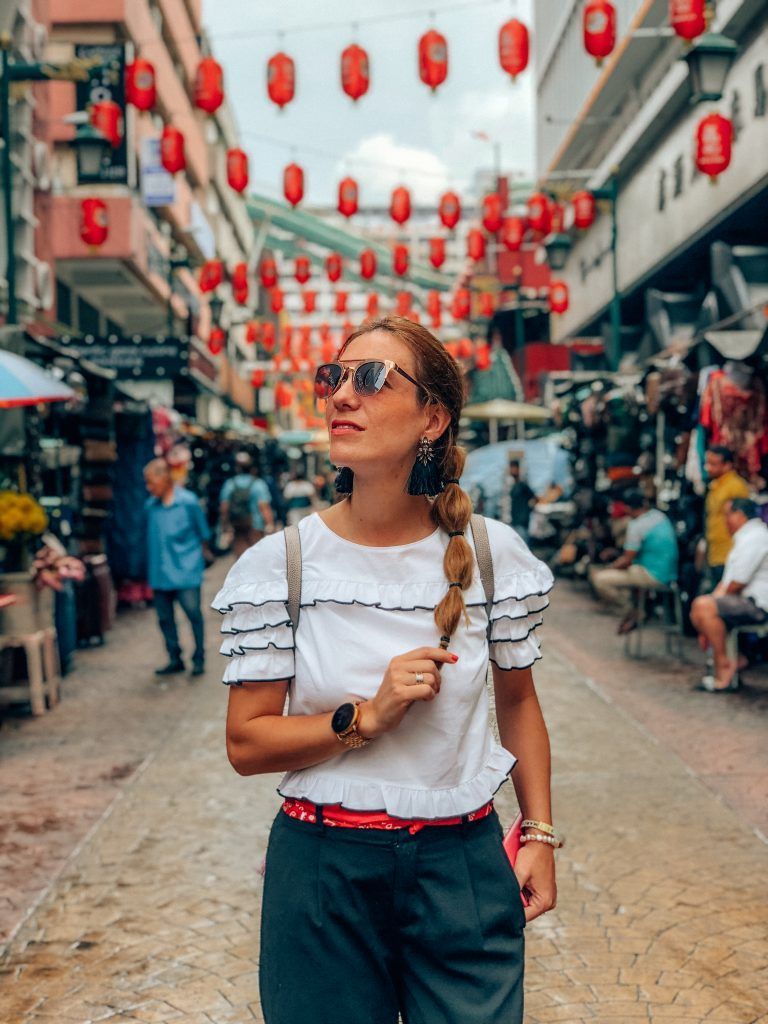 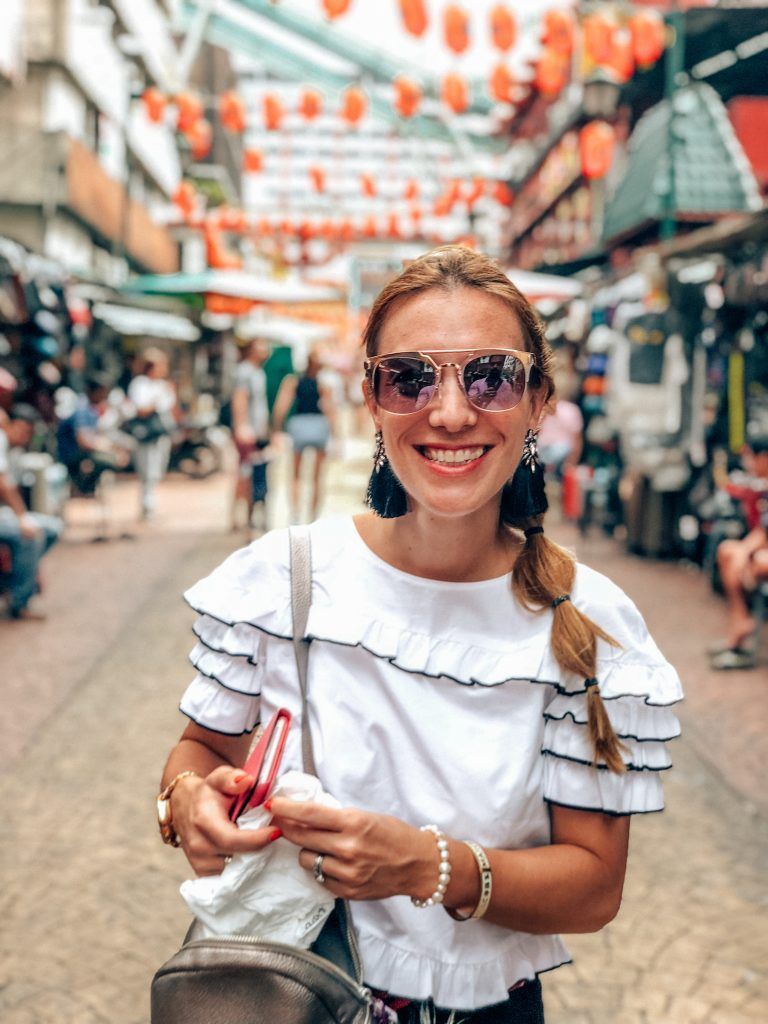 For buyers on a tight budget or those looking for cheap and cheerful brand products, Petaling Street will be your first stop, as it offers not only variety, but also good value for money, since prices can be further reduced by A tough negotiation. Petaling Street is also full of opportunities to try a delicious variety of local cuisine.

Chinese and seafood restaurants can be found on every corner, and stalls selling all kinds of snacks spread out along the street, resulting in an interesting scent mix that fills the air that is hard to resist . The best thing about them is that most of them are open until late at night. 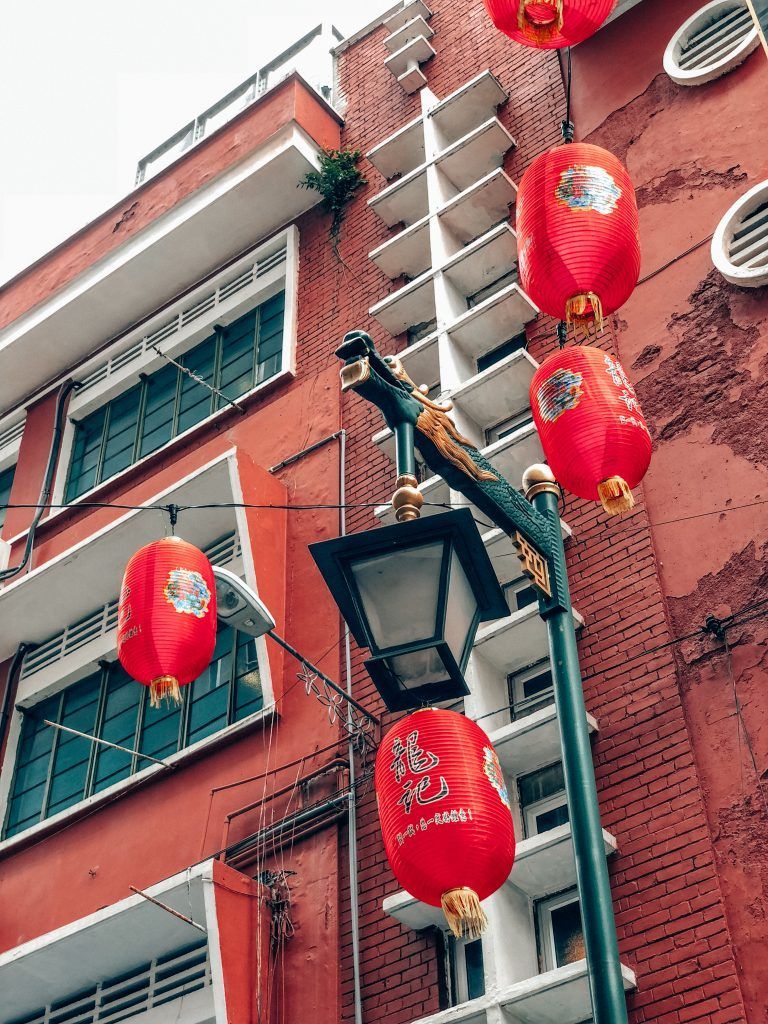 In the old days, when Malaysia was still known as ‘Tanah Melayu’ or Malaya, the Chinese had come to this country to work in the tin mines. However, during the Selangor Civil War, the tin mines were temporarily abandoned. The Chinese returned after the war, only to find the mines flooded.

An influential Chinese figure at the time, had opened a tapioca factory on Petaling Street in an attempt to persuade the Chinese to stay. To this day, Petaling Street is sometimes called ‘Chee Cheong Kai’, which means ‘Starch Factory Street’ in Cantonese, referring to its history as the center for the production of tapioca flour at that time. 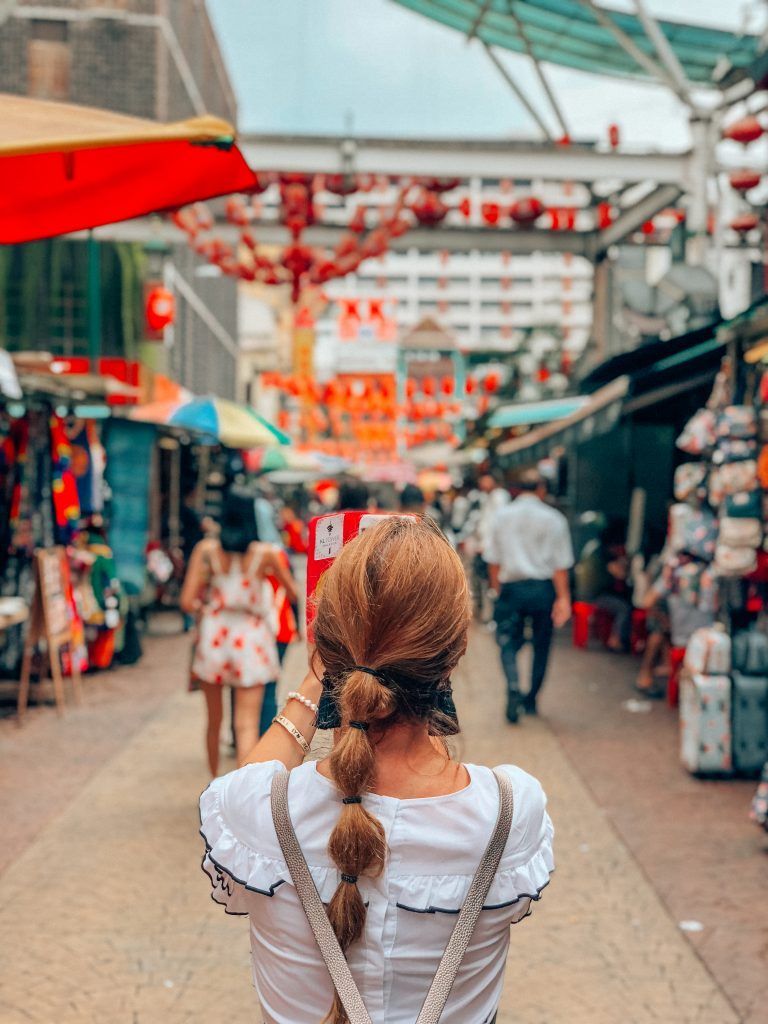 Since then, Petaling Street has been given a facelift. Gone are the irregular roads, the broken pavements and the colorful parasols attached to the wooden carts that line the street on both sides. A green awning covers the length of the street, acting as a roof to protect sellers and buyers from heat and rain. An oriental-style arch with the words ‘Jalan Petaling / Petaling Street’ in gold letters greets visitors at its main entrance.

How to get to Petaling Street Is has a good public transport network. The main bus routes operate through this area, just take the ones that go to ‘Kotaraya’. There are also many train stations nearby; You can take the LRT (station Pasar Seni or Masjid Jamek), KTM Komuter (station Kuala Lumpur) or monorail (station Maharajalela), all within walking distance. 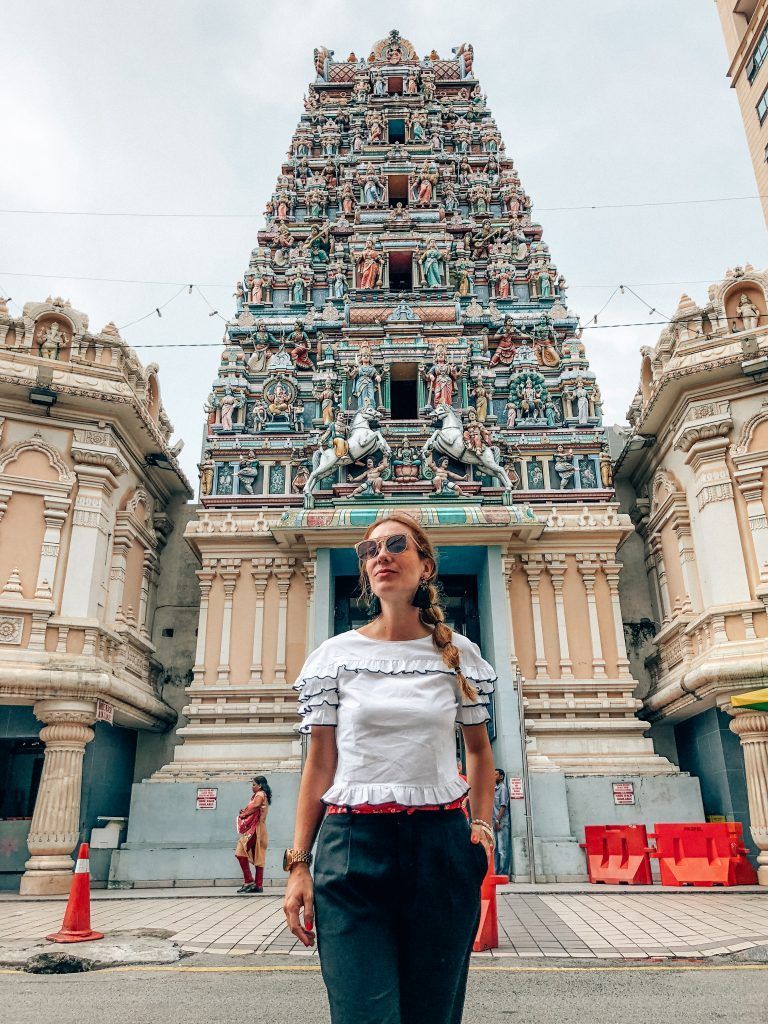 If you keep walking through Petaling, you will arrive at this Hindu temple. It was the first Hindu temple that I visited because although we had been in the Batu Caves, it is more about Caves that serve as a pilgrimage center rather than as Hindu temples in themselves. I thought it was incredible.

It has a truncated pyramid at the entrance called gopuram in Indian architecture, richly decorated with deities and five stories high, which is said to be the threshold between the material world and the spiritual one. It is the oldest temple in Kuala Lumpur. and they say it is also the  richest one. Super nice and colorful incorporating Spanish and Italian tiles, precious stones and gold in its design. The gopuram is decorated with 228 Hindu idols depicting scenes from the Ramayana.

I love the great cultural and multiracial integration that exists in Malaysia and Singapore. This Hindu temple is located in Chinatown between two Buddhist temples This large and elaborate Hindu temple was founded by Tamil immigrants from southern India, who came to Malaysia as contract workers to build railroads and roads or work on rubber plantations ; the main objective of the Temple was to serve as a consolation to the rigors of his working life. 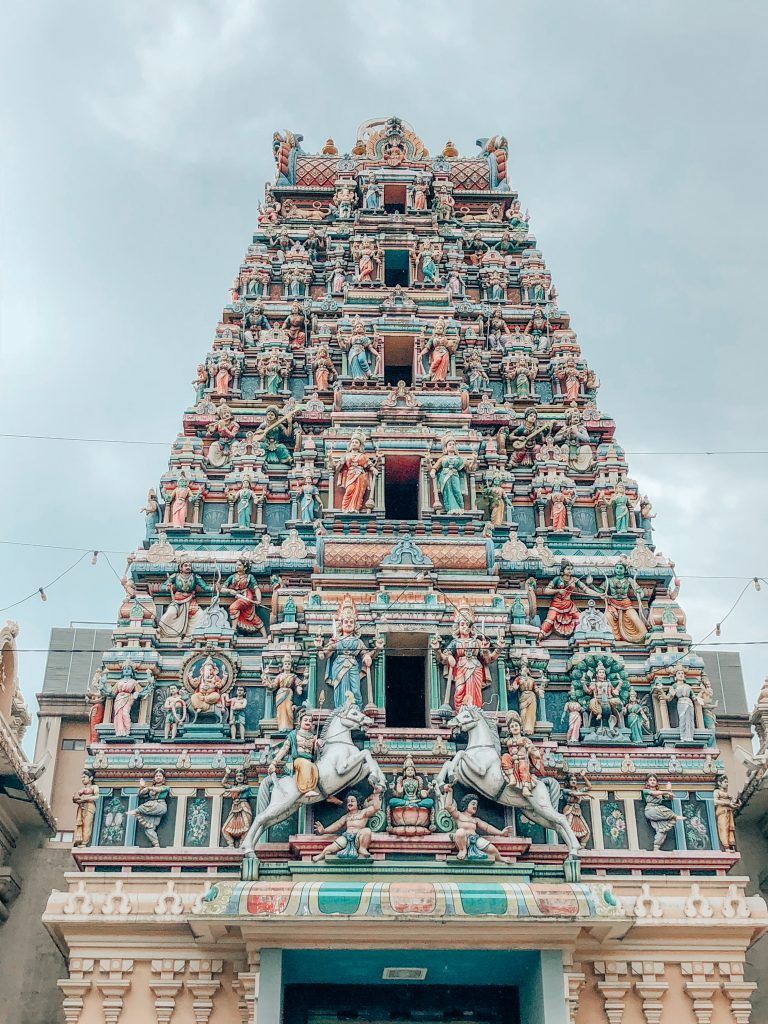 Inside the temple, in the sanctum sanctorum, is the main image of the deity Sri Maha Mariamman considered as protector of the Tamils during their stay in foreign lands. There are several sanctuaries, some more and some smaller ones dedicated to Lord Ganesha, Lord Muruga and Lakshmi (Goddess of wealth).

According to Hindu tradition, the temple is consecrated once every 12 years. As for the visit, it is free although you can donate something for its maintenance. Opening Hours: 06:00 – 21:00 Address: 163, Jalan Tun H. S. Lee, Kuala Lumpur.

Have you been in Kuala Lumpr? Did you also visit all these places? Which one did you like the most?

What to see in Kuala Lumpur in 72 hours Part 1