Why can it be a good plan to see Santorini in 24 hours?

Hello Nextinationers, as I commented in my previous post about Crete, we dedicated a whole day to go to Santorini. If you are not convinced to stay for several days on this famous Greek island, this can be a good plan, to enjoy and see Santorini in 24 hours for the following reasons:

As I told you before, we made the decision to spend a week in Crete because we felt more comfortable with good beaches, had several places to visit and because is easy to move around by car. Also, it is fortunate to have Santorini very close by, so it is perfectly viable to go to spend a day there from Crete. 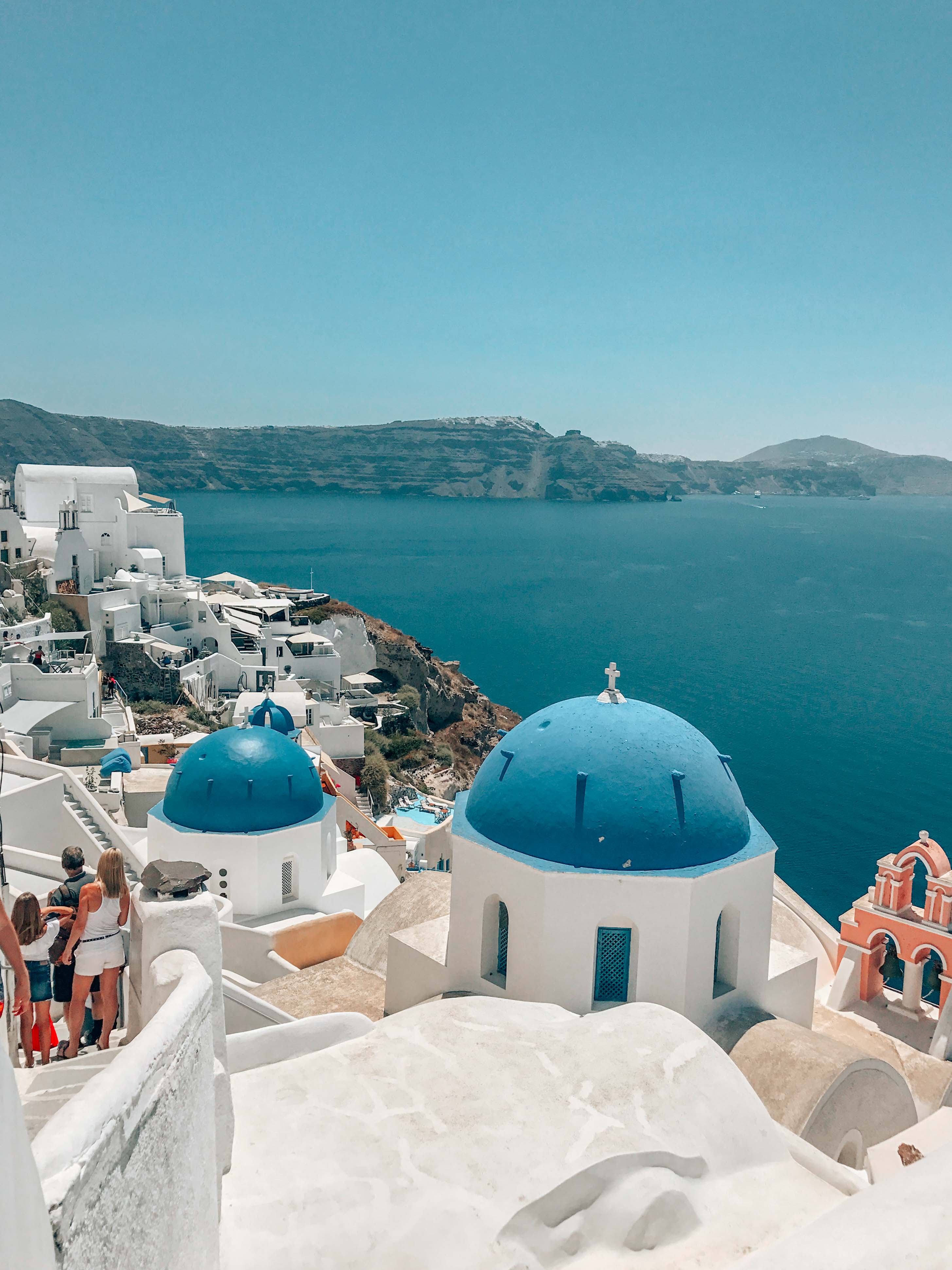 How to book the excursion to Santorini?

There are several agencies that carry out these excursions from Crete. We booked it with Paleologos, but they also work directly with Greece Ferries and cruises in Greece. The excursion is not cheap, but it’s the only option from Crete. We paid €160 per person. Young children do not pay and is included the Ferry-round trip to Santorini-and the day-tour of the Island with guide in English. The food you’ll pay aside.

The ferries depart from various points of Crete, not only from Heraklion, so you can  save the need to go to the capital if you are in another place on the island. In our case, we departed from Retino early morning, 8:00 a.m. We had to arrive with 40 minutes in advance. Keep in mind that these ferries are huge boats that go even with buses and cars inside,  so it takes time to embark.

The truth is that the boat is super comfortable, with a cafeteria where you can enjoy coffee, breakfast, juices, etc.  and  after 2 hours of boat ride,  you are in Santorini. The arrival is spectacular. It’s so beautiful!

TIP
At lunchtime, the guide will recommend you to eat at some place of “its recommendation”, saying that is cheap and good quality, and you wondering, “Well then, why not go?” . The restaurant is the typical tourist trap.  You can go, of course, but the place is very average, not even on the main streets, has no views, and the food looked like the buffet type. We kindly rejected the offer, and as we saw our tour companions walk in to this culinary wreck, we decided to go on our own to the Main Street, where we found  several restaurants with terraces and spectacular views to the caldera. It is true that the restaurants here are not cheap but is not extremely expensive either. The food was really tasty, and to be honest,  to enjoy the magnificent views of the caldera, siping a cocktail without people pushing is worth it. Besides, you don’t go to Santorini every day, don’t you? One day is a day! And since you want to enjoy the island, I assure you that this was one of the best experiences during the excursion.

What to see in other Greek islands like Crete, cradle of the current Minoan civilization. 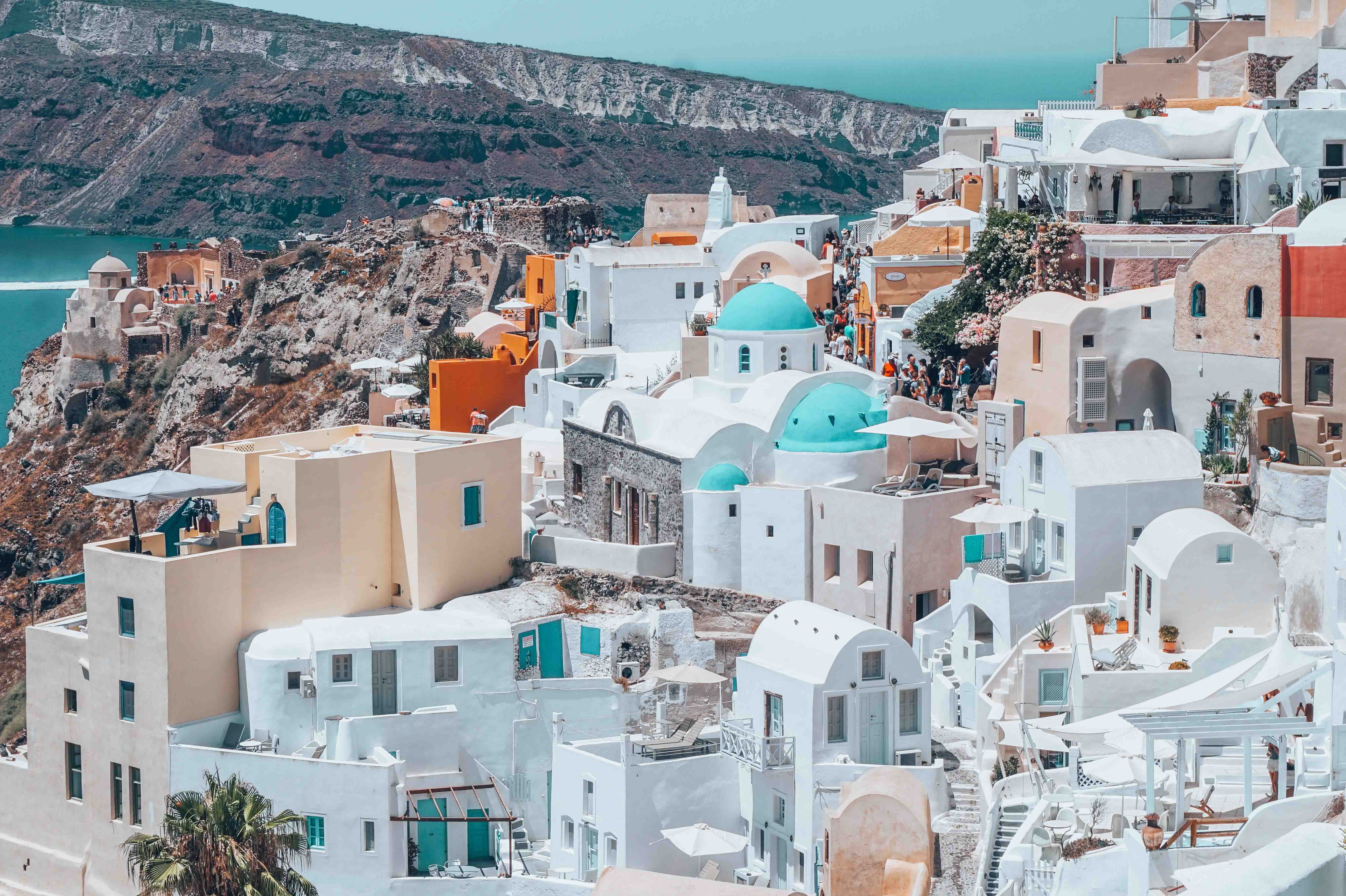 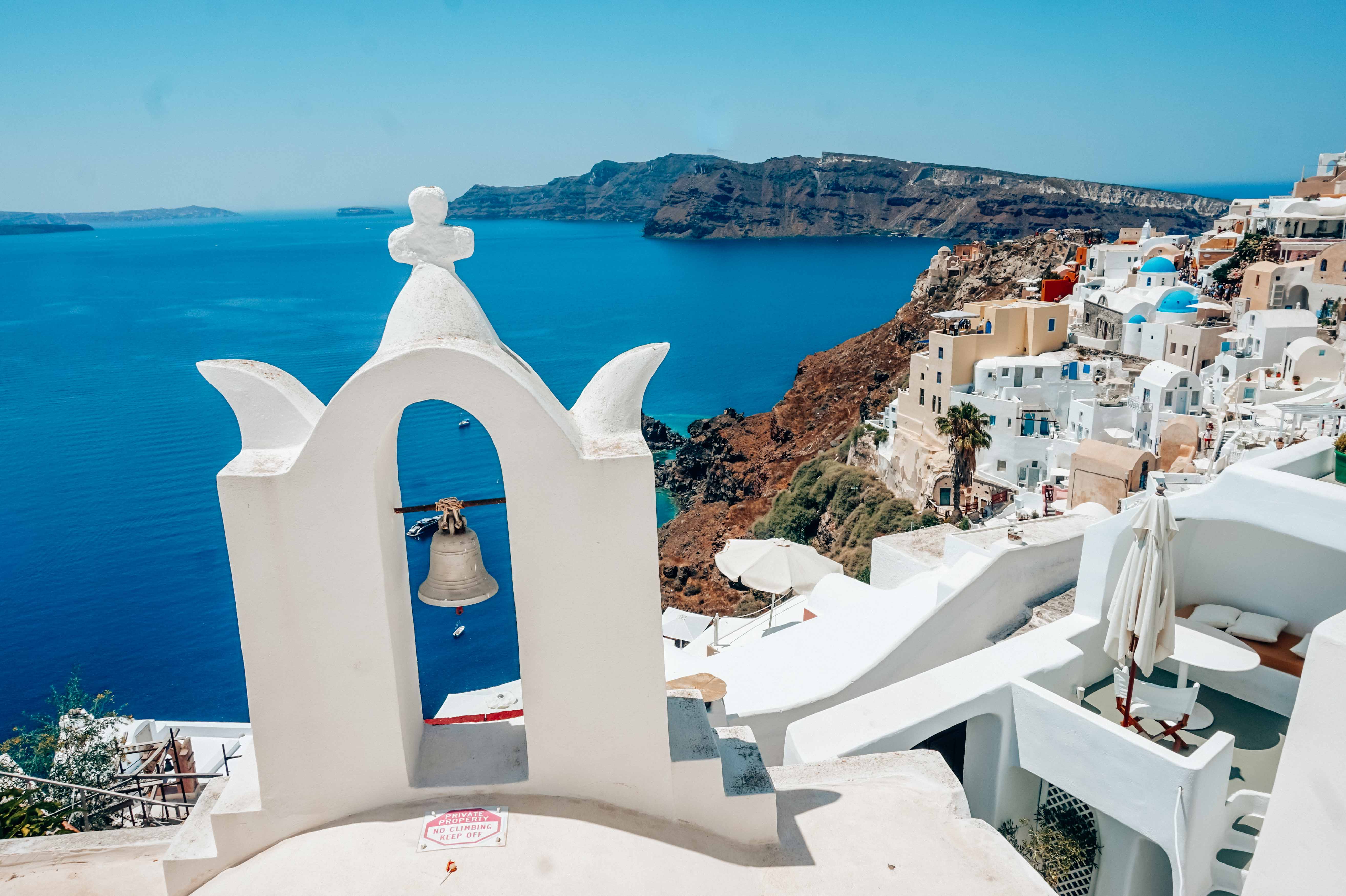 What to visit in Santorini in 24 hours?

As the result of a volcanic explosion that caused the central part of the island to sink underwater four millennia ago, the remains with a crescent shape, cliffs and volcanic stone, has given Santorini its unsurpassed beauty, as few sites have it,  of dark-colored stone  which highlights the contrast with their white-painted houses, blue windows and doors,  and their barrel vaults on the ceiling. Here is like getting you into a postcard, from one of those photos that we’ve seen hundreds of times in the magazines. And Santorini does not need filters, it is precious as it is.

The guide told us that  the explosion  of the volcano was equivalent as two million atomic bombs like the one thrown on Hiroshima. However, he says, the volcano is not dead yet. Like a great sleeping monster, its interior still breathes, creating fumes and sulphur vapours on the young island of Nea Kameni.

It has incredible volcanic beaches, where the most famous is the Red Beach, named after the color of its sand. The other part of the island, called Thirassia,  is quieter than this part of Santorini and from the excursion they offer you the possibility to go there by boat or to the red beach or to some mud baths. However, we decided to stay in this part of Santorini and visit Oia and Thira. After all, we wanted to see the most important of the island and, definitely, Thira and above all Oia, are their icing on the cake. 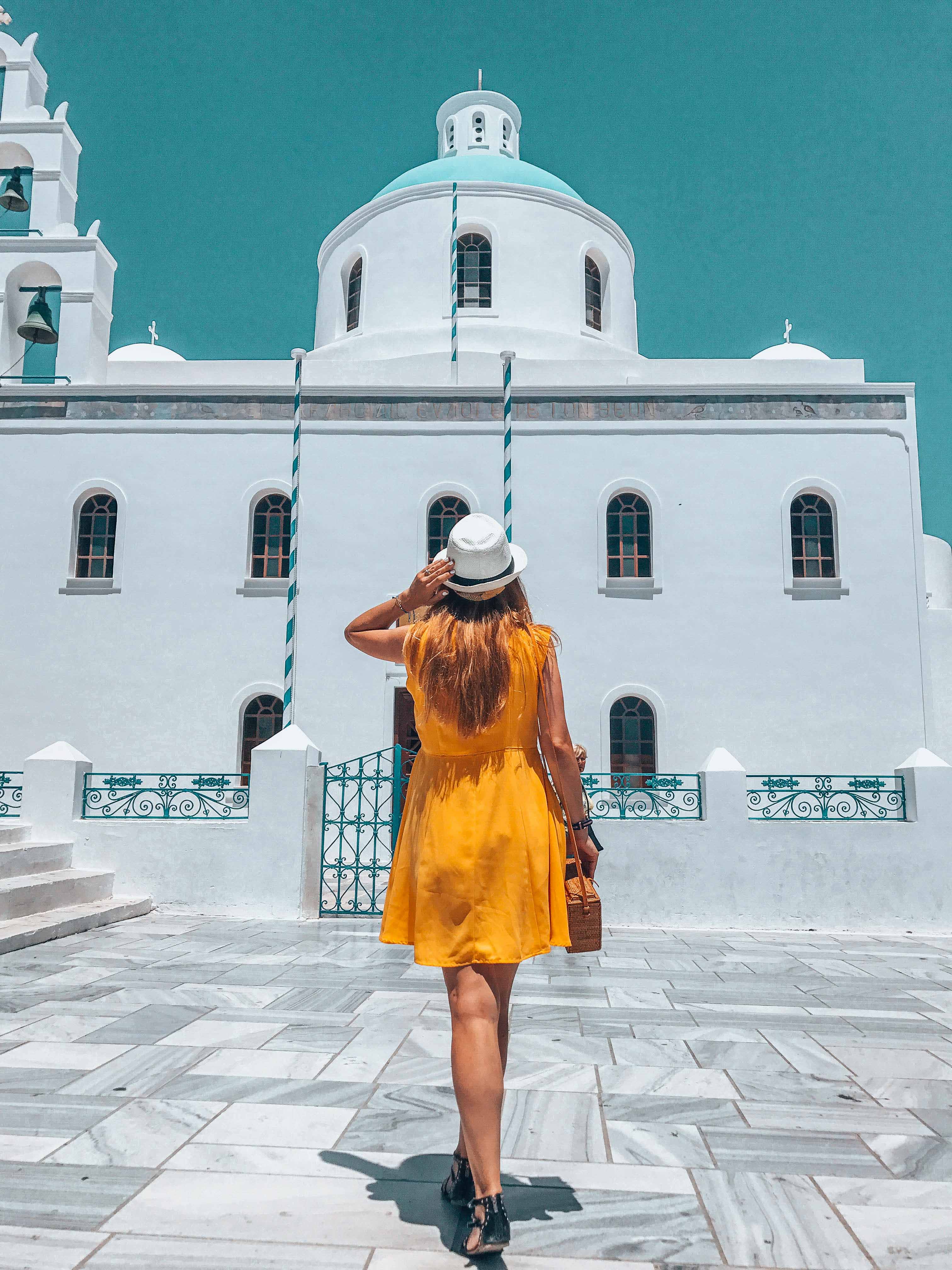 How to get around in Santorini

In our case we were going by bus because so we hired our day trip, but there are also alternatives to make the trip on your own , so when you get to the port there are several options: taxi, rent a car or a scooter. The taxi trip costs about 20-25 € to Thira. There is also a shuttle bus for €11 per person. Yes, you will have to take into account the winding roads of the island. The bus driver joked that you almost have to do a master to drive a bus here and almost no one wants to do it.

Another activity that is within the typical tourist circuit, and that is not to the liking of all, is to arrive at Fira  on a donkey or mule, climbing the many steps that are from the port. It’s an adventure, since the slope is huge. There are people who criticize this for the poor donkeys, but whether or not we want, for now, is something we will see here and super typical of Santorini.

If you do not like walking or not dare to take the donkey, for 6 euros there is a cable car that goes up or down from Thira to the port. It is much more comfortable and somewhat more economical, and they say it takes only 4 minutes.  So they say, and not to end the historic tradition of donkeys, part of the revenues of the cable car are destined to the owners of the donkeys.  However, I  recommend that if you can, you walk down the 580 steps to the port if we have time because the views are spectacular. You always have to leave something to come back true? 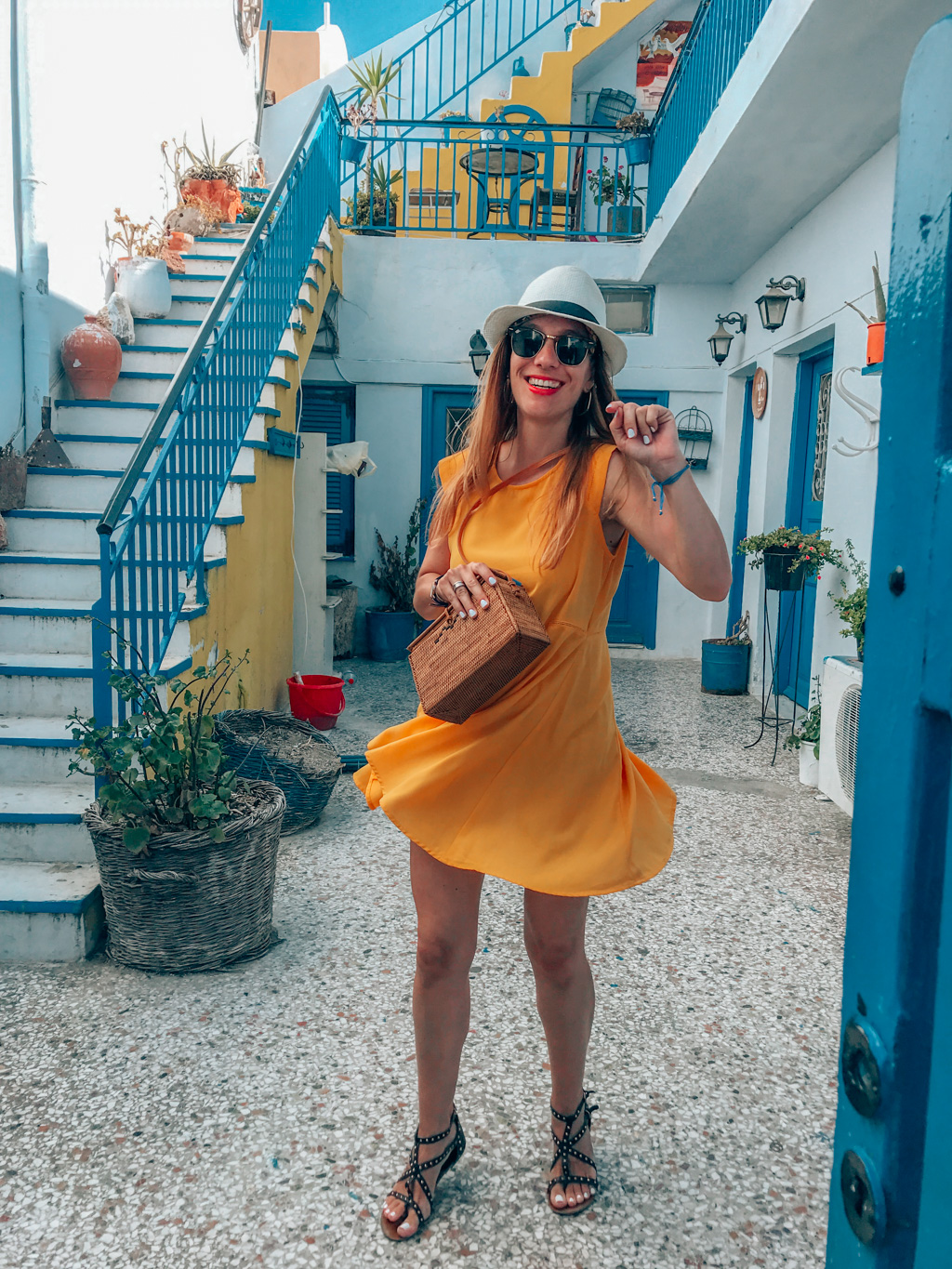 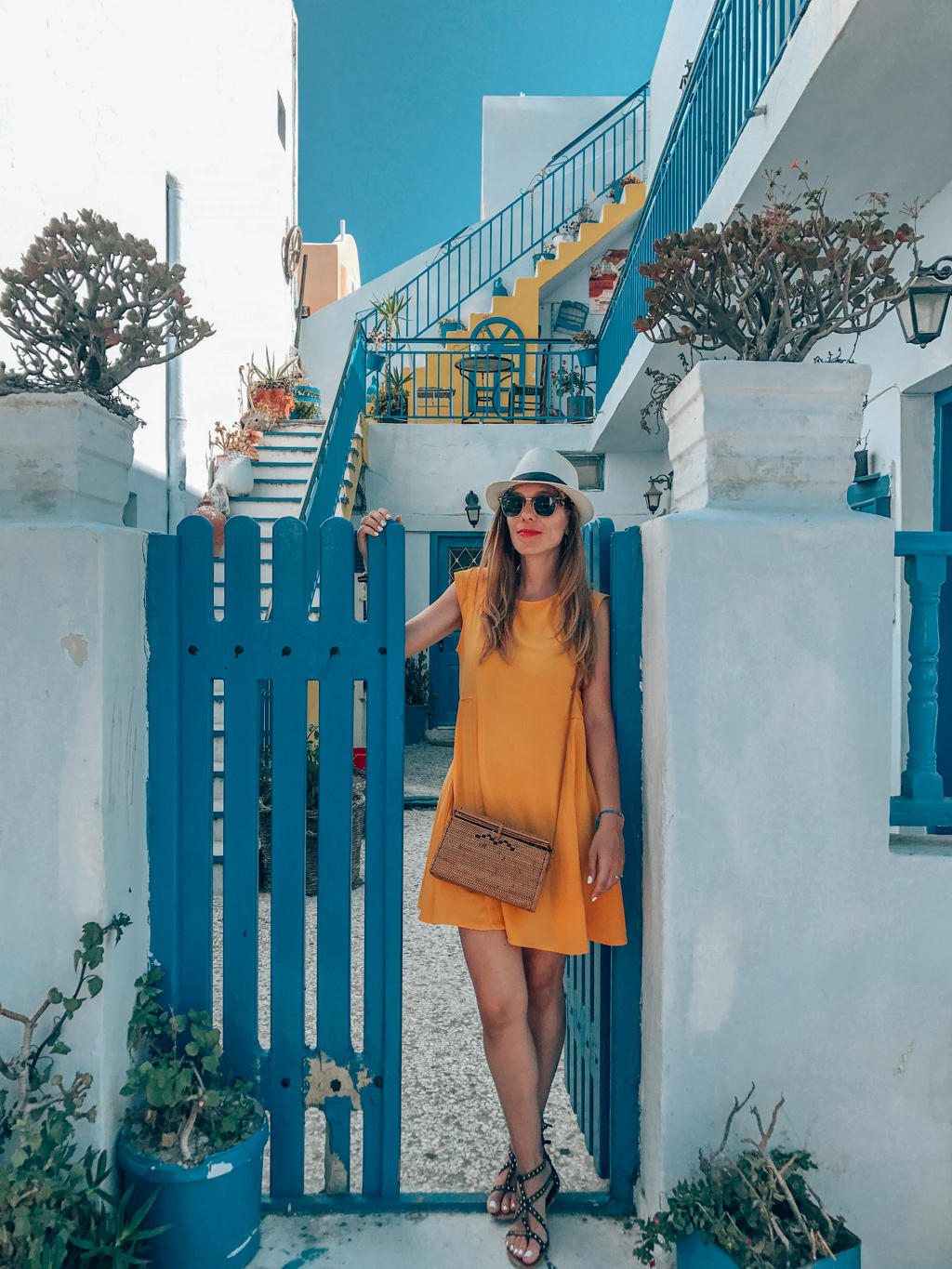 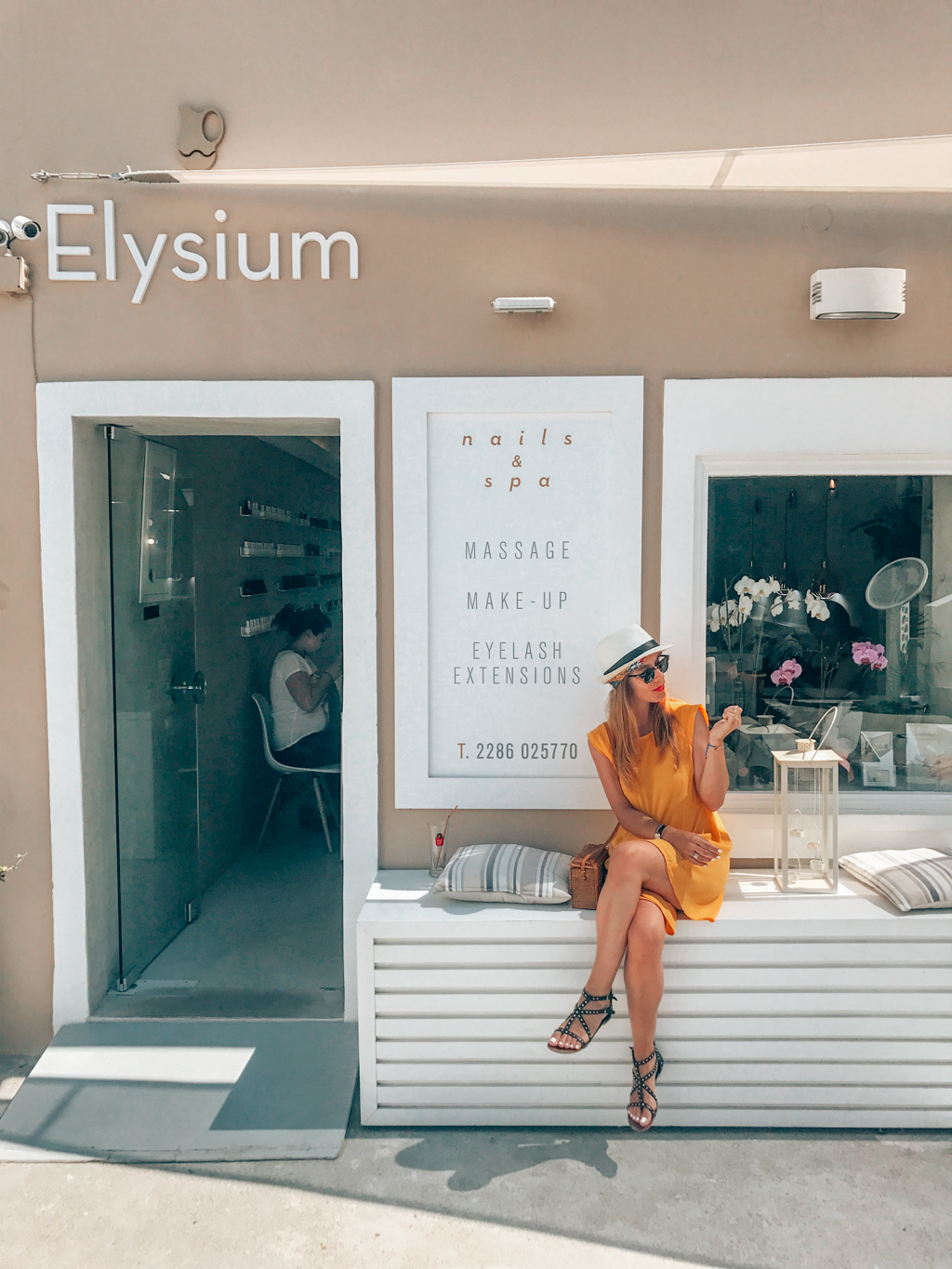 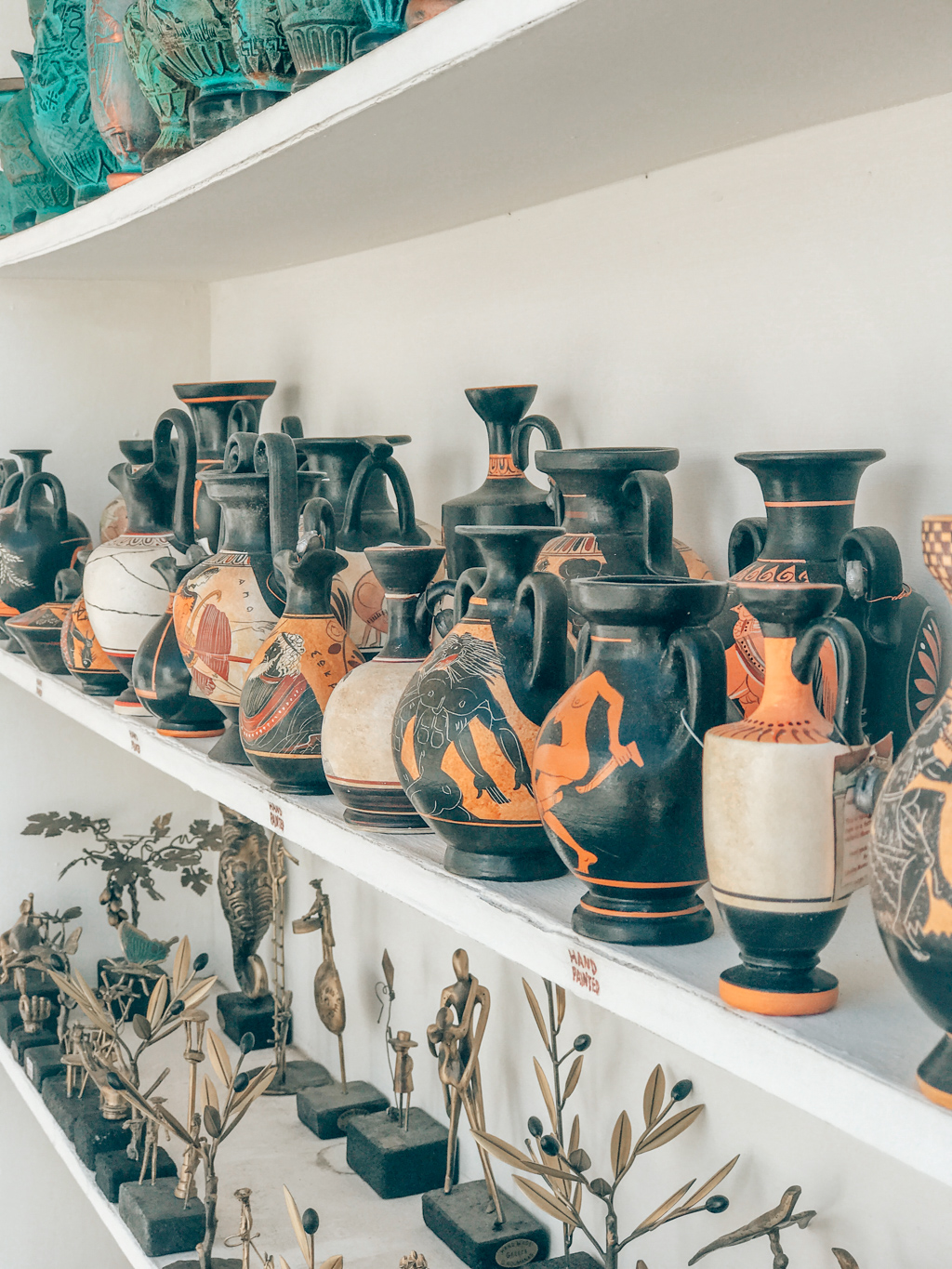 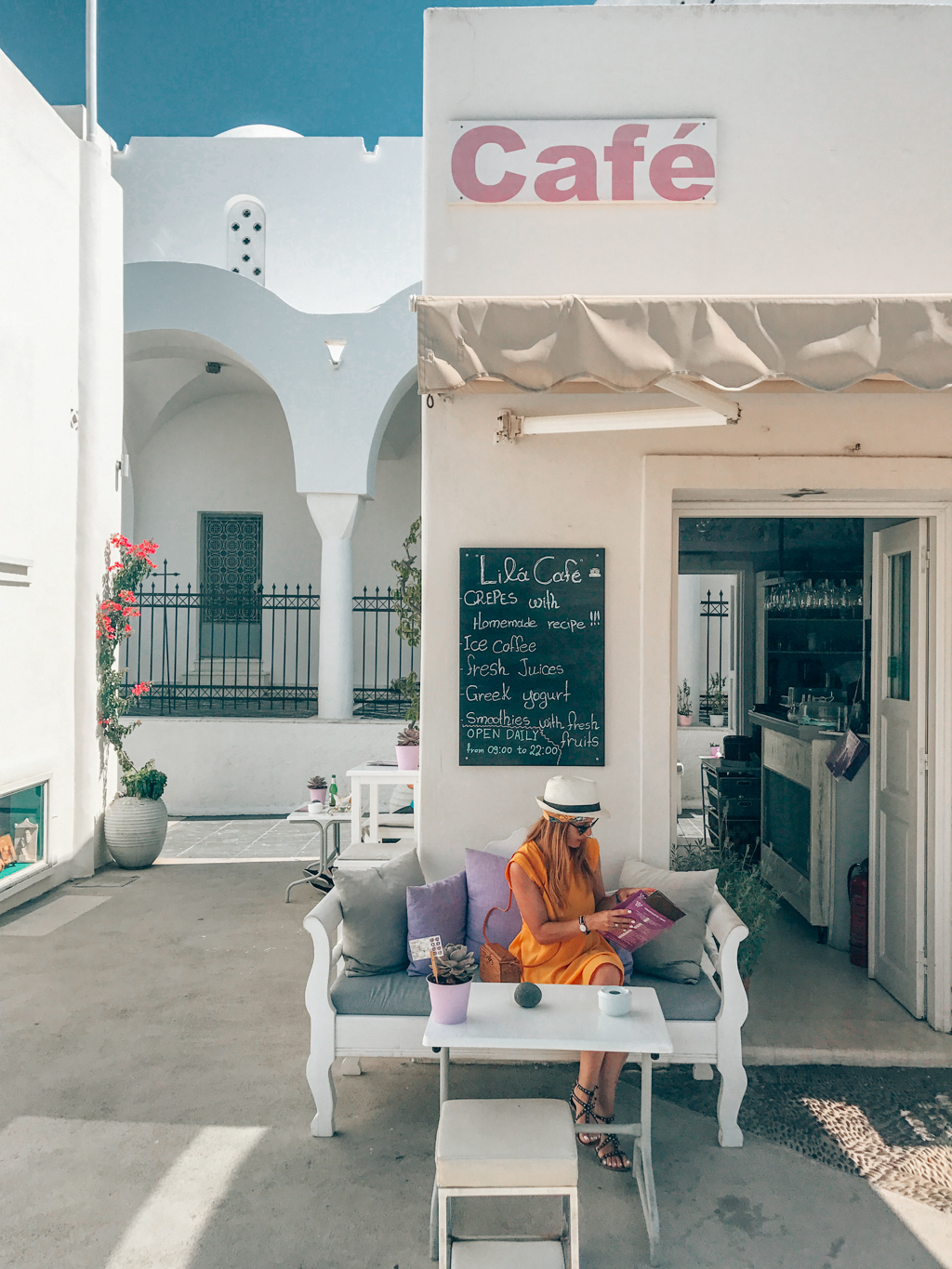 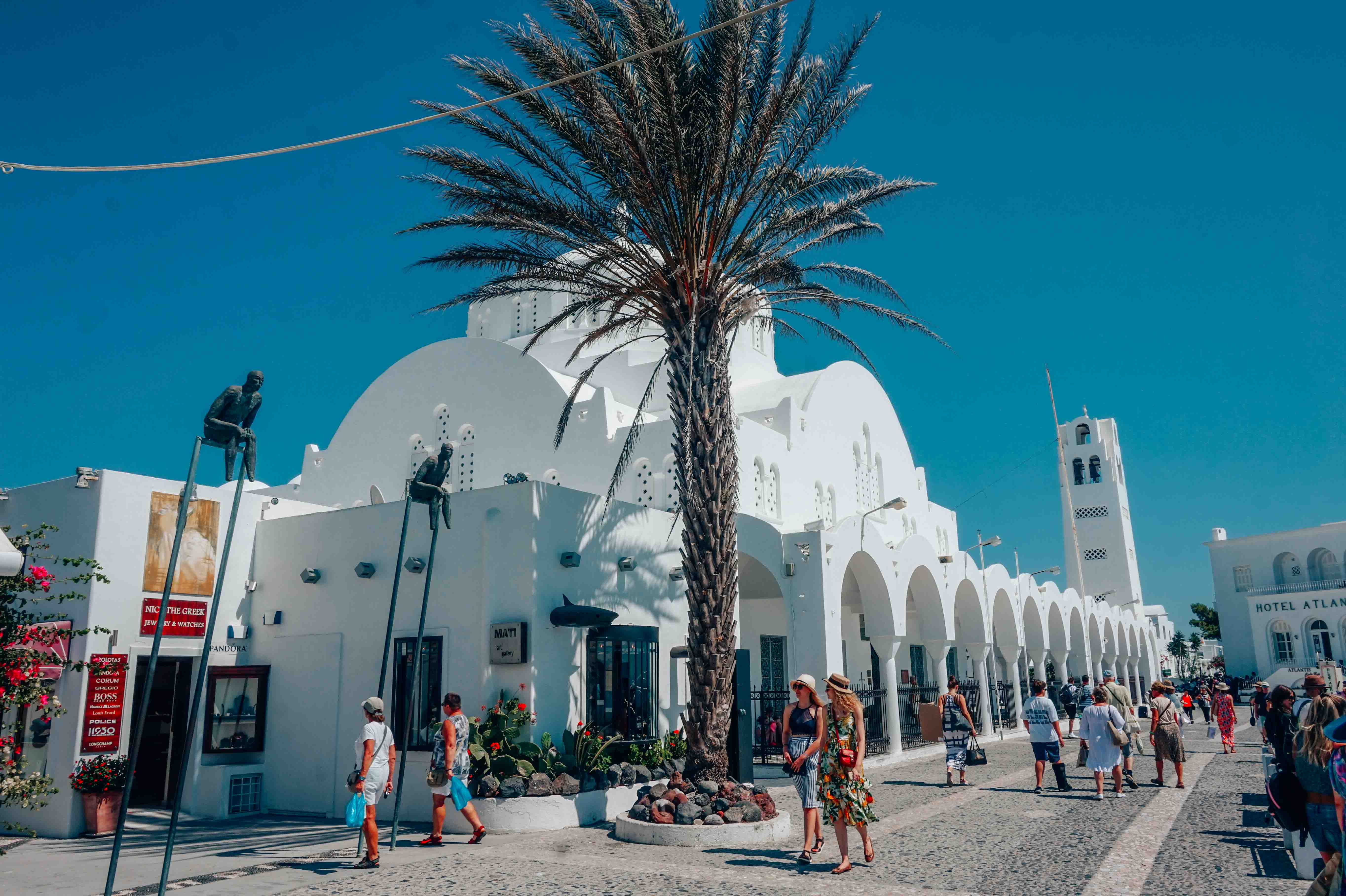 The first stop will be Oia-pronounced “Ia” in Greek-, one of the most famous and tourist sites of the island. Located in the northwest, it offers one of the best sunsets on the island. The bus leaves us in the main car park and in hour and a half picks us up. From there to the main street are not more than 10 minutes although the narrow streets and white cobbled, beautiful, lose a bit of charm by the number of tourists who travel. Once you arrive at the main square, not before passing through several craft shops in which you want to buy everything, you will find your church, the Platani Church, one of the architectural gems of Santorini. Once there you reach the main street which is beautiful, cobblestone and with souvenir shops, art galleries, cafes and bouganvillas.

As a recommendation, it is best to get off the main street, towards the caldera and there you will reach some viewpoint with fewer people and where you’ll see all the Skafta Cave House carved directly on the rock, one of the characteristics of the town of Oia. Here you will notice that many times the balcony of a home is often the roof of the apartment below. Every time I looked around I could not stop thinking about how beautiful Santorini is! Really a place you have to visit at least once in your life!

After an hour and a half walking among dozens of tourists, we could get an idea of what Oia is like. I loved it! We went back to the bus, without first discovering new sites on our way back. 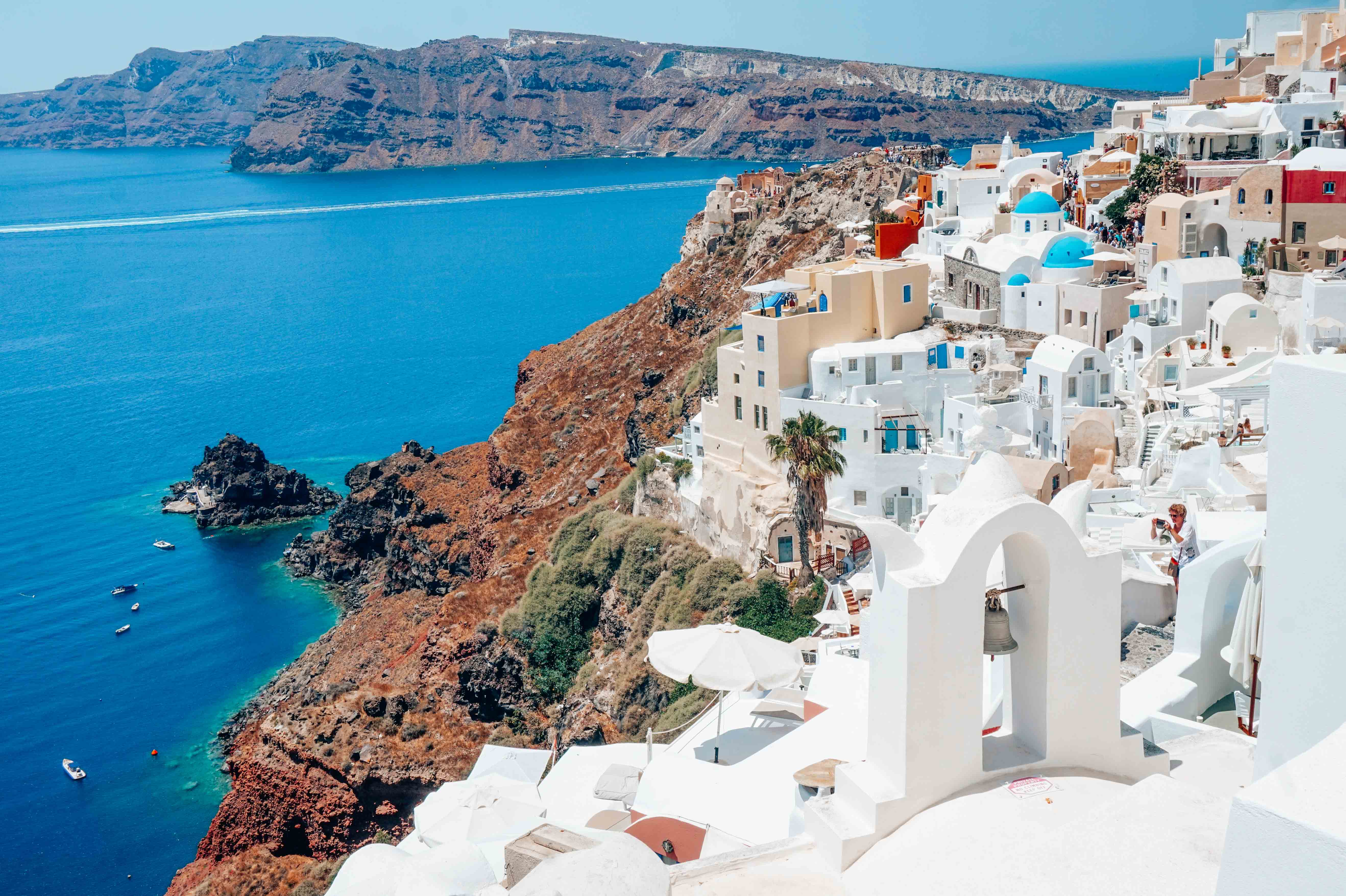 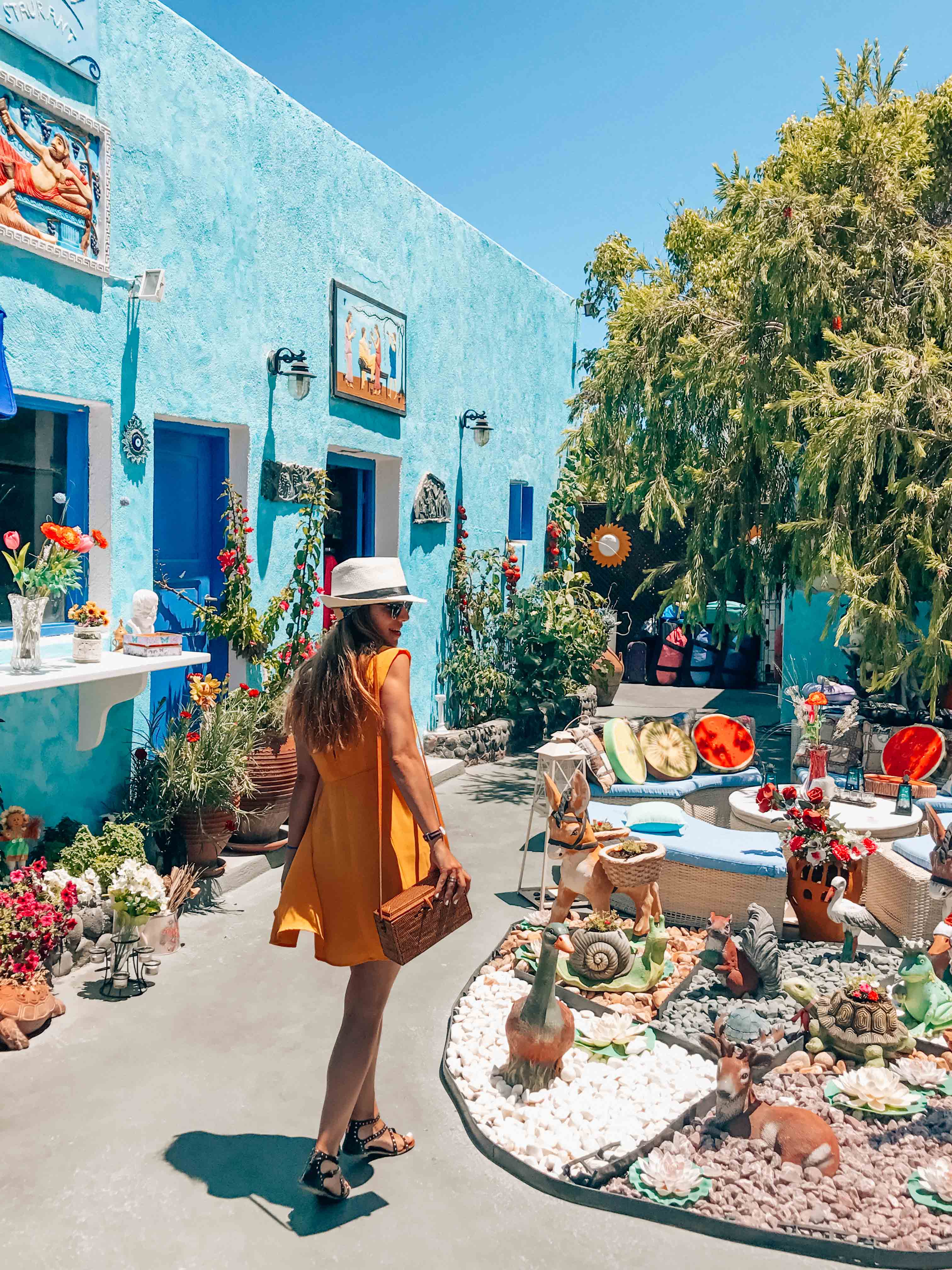 After half an hour on a winding road we arrived in Thira, the capital of the island. This is where the tour left us for lunch time. Follow my recommendation and go better to one of the restaurants on the main street overlooking the Caldera, and you’ll do not regret.

I remember the tour guide told us that Santorini was one of the places in the world with more weddings per year, so I was not surprised when we met a bride with all her bridesmaids on the way to the ceremony. Who wouldn’t want to marry those dreamy sights?

Just around the main street, which is  full of pottery shops and boutiques, we decided to go into a place to eat and chose the Santorini Classico.  Amazing  views and  food. We enjoyed a great time there. At last, away from the dozens of tourists around. We had a table over the cliff and with views 180 degrees to the Caldera. One of the best views I’ve ever seen. Just amazing. The V Lounge Cafe & Cocktail Bar also looked good. Any of them, on that street will be a good choice for sure. 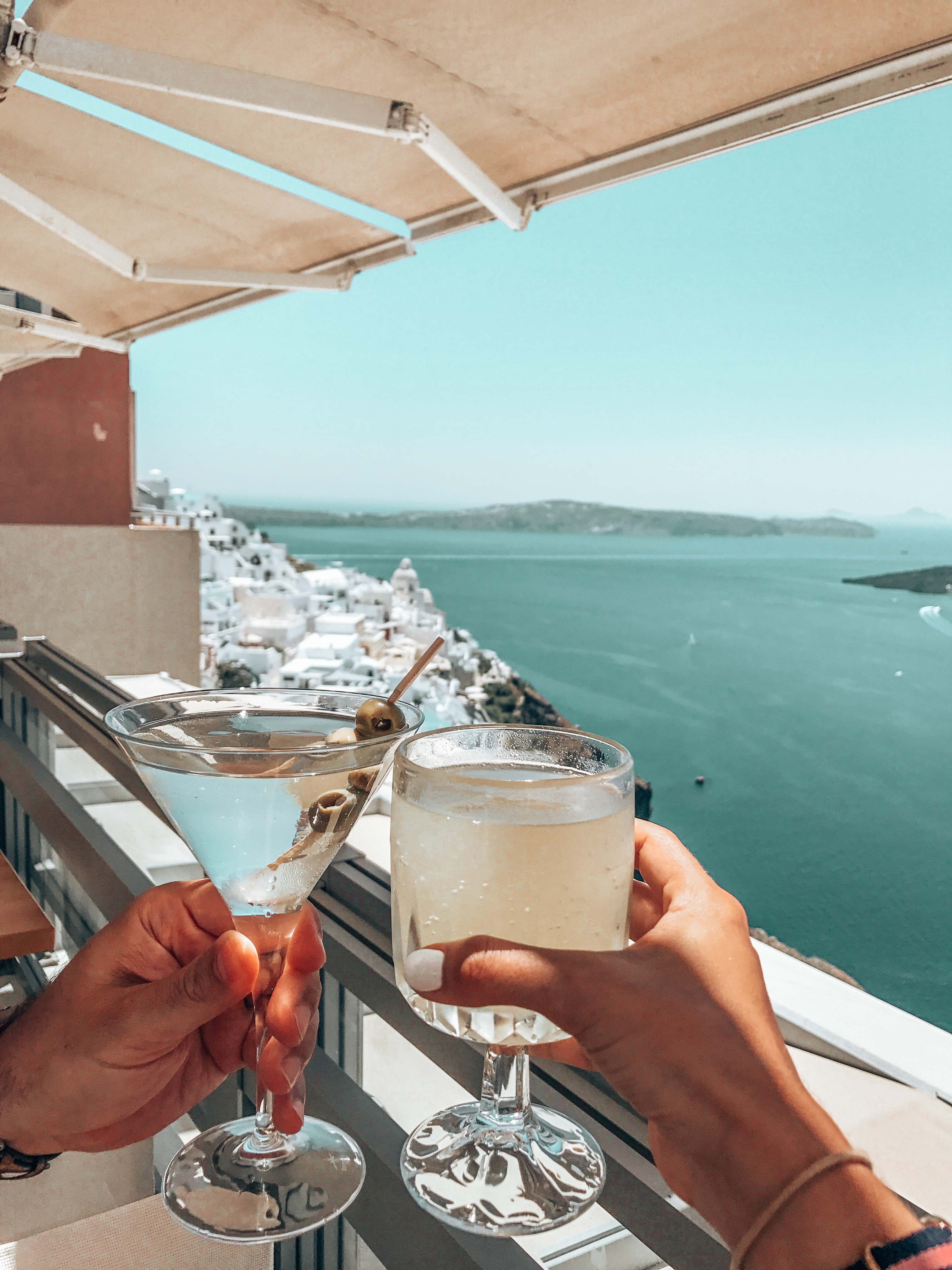 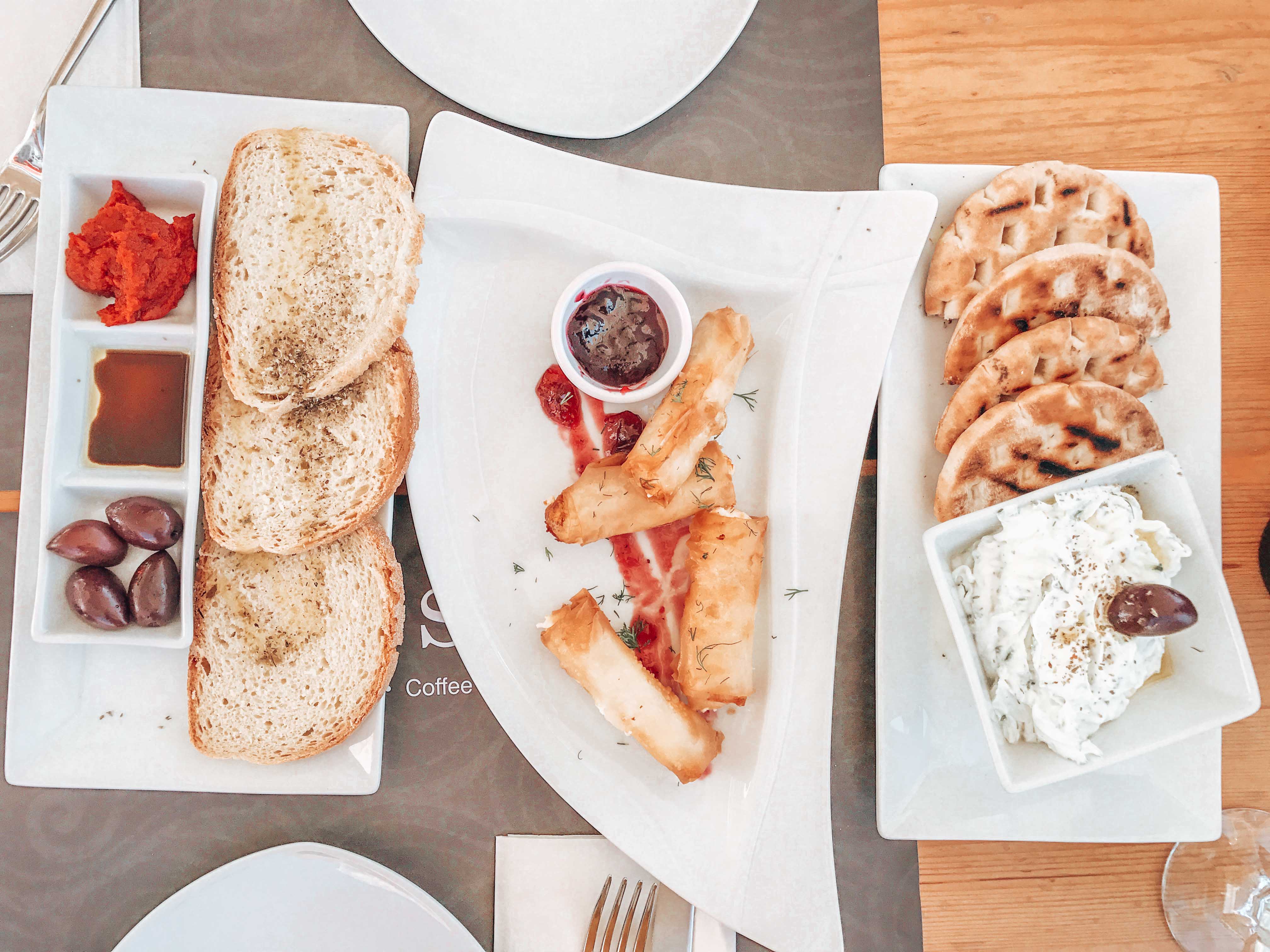 After eating and delighting for an hour with these wonderful  views, we set out to walk through Thira.

We found the Orthodox Metropolitan Cathedral of Fira, the main church of the capital city of Santorini. The church is painted in divine white blinding, with a large dome that can be seen some distance from any part of Fira or Santorini! The arch that serves as the main entrance to the church has a wonderful mosaic and the floor has a mosaic of the doubleheaded eagle, the symbol of the Orthodox branch of Christianity. Inside the cathedral I was struck by the colorful and wonderful frescoes of Byzantine style throughout the interior of the church with a colossal fresco of the Christ Pantocrator-Almighty-in the dome that crowns everything! Sadly, photography is not allowed within the Metropolitan Orthodox Cathedral of Fira.

Apparently, Thira has another cathedral, the Catholic. They say its much more famous than her orthodox sister. The Catholic Cathedral is dedicated to San Juan Bautista and is the epicenter of the small Catholic district of Fira.

The best in Thira is to explore its streets full of shops, jewelry, pottery, etc.  The most traditional stores are focused on artisanal products: ceramics, jewellery and fabrics. But the best thing is not to stop admiring all the time its incredible views. A view that will remain in the retina of one forever. Its deep Blue bay is dotted with these characteristic white houses and those giant cruisers that furrow its waters, full of tourists willing to mark their routine forever as well. 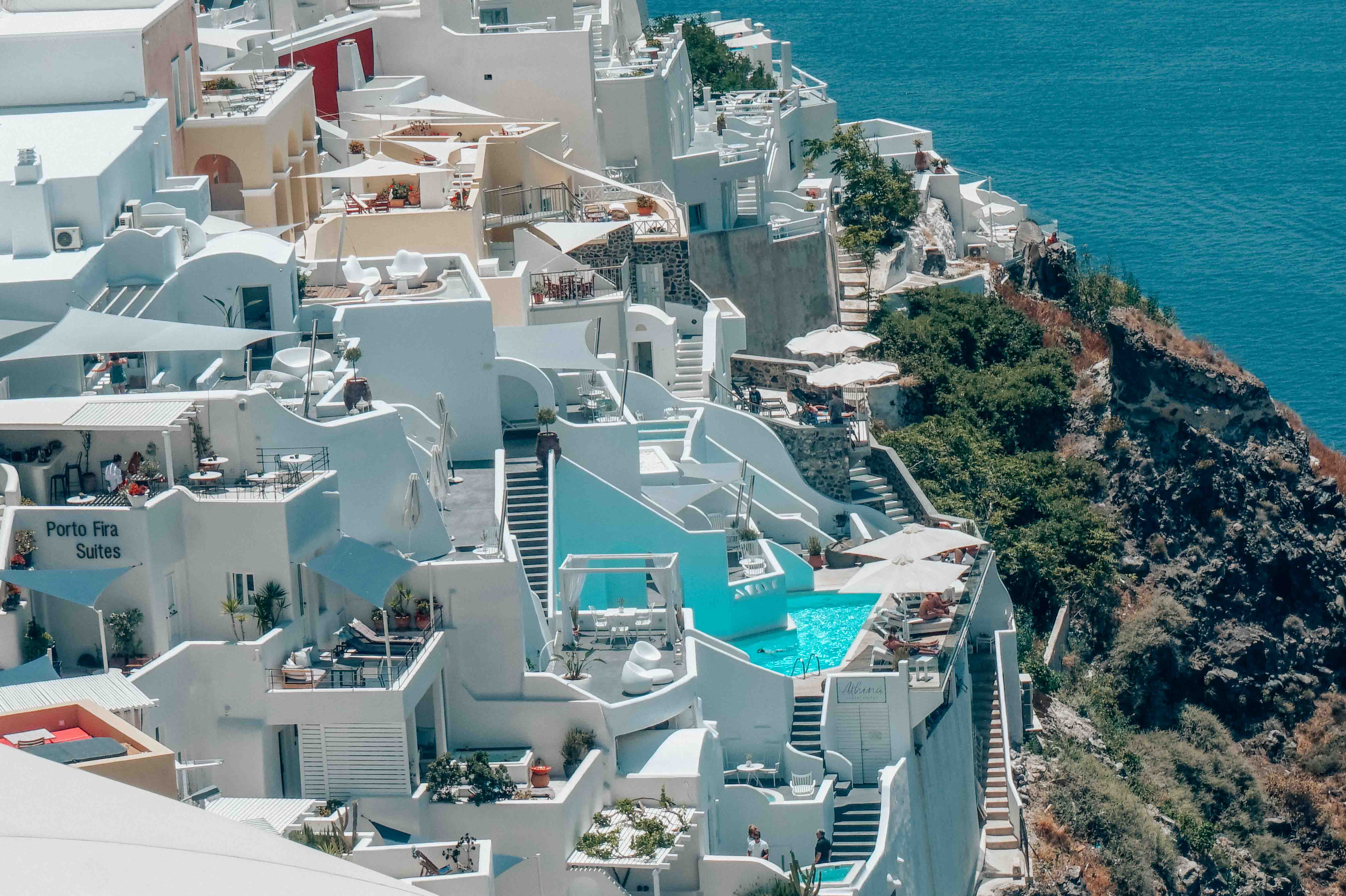 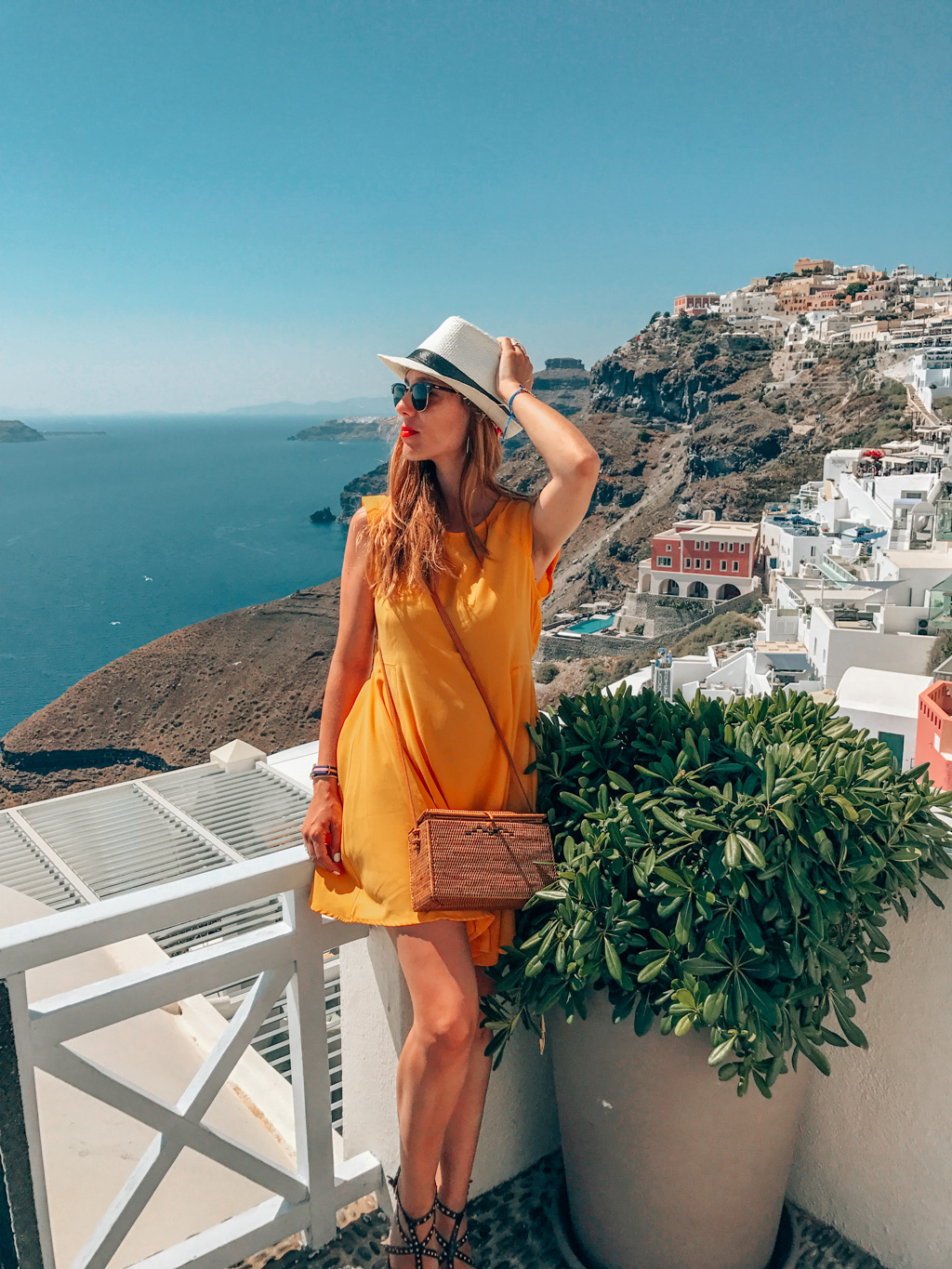 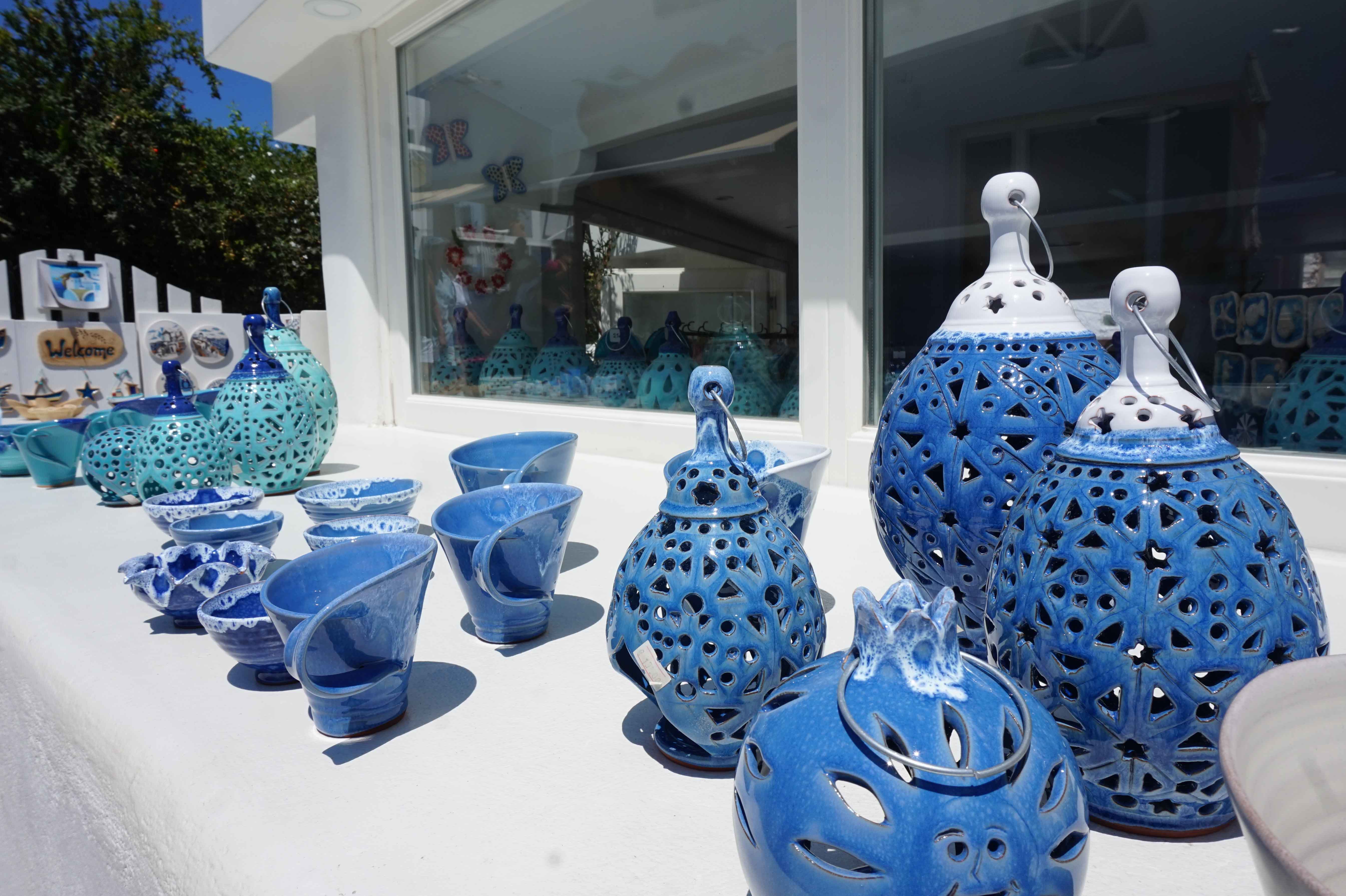 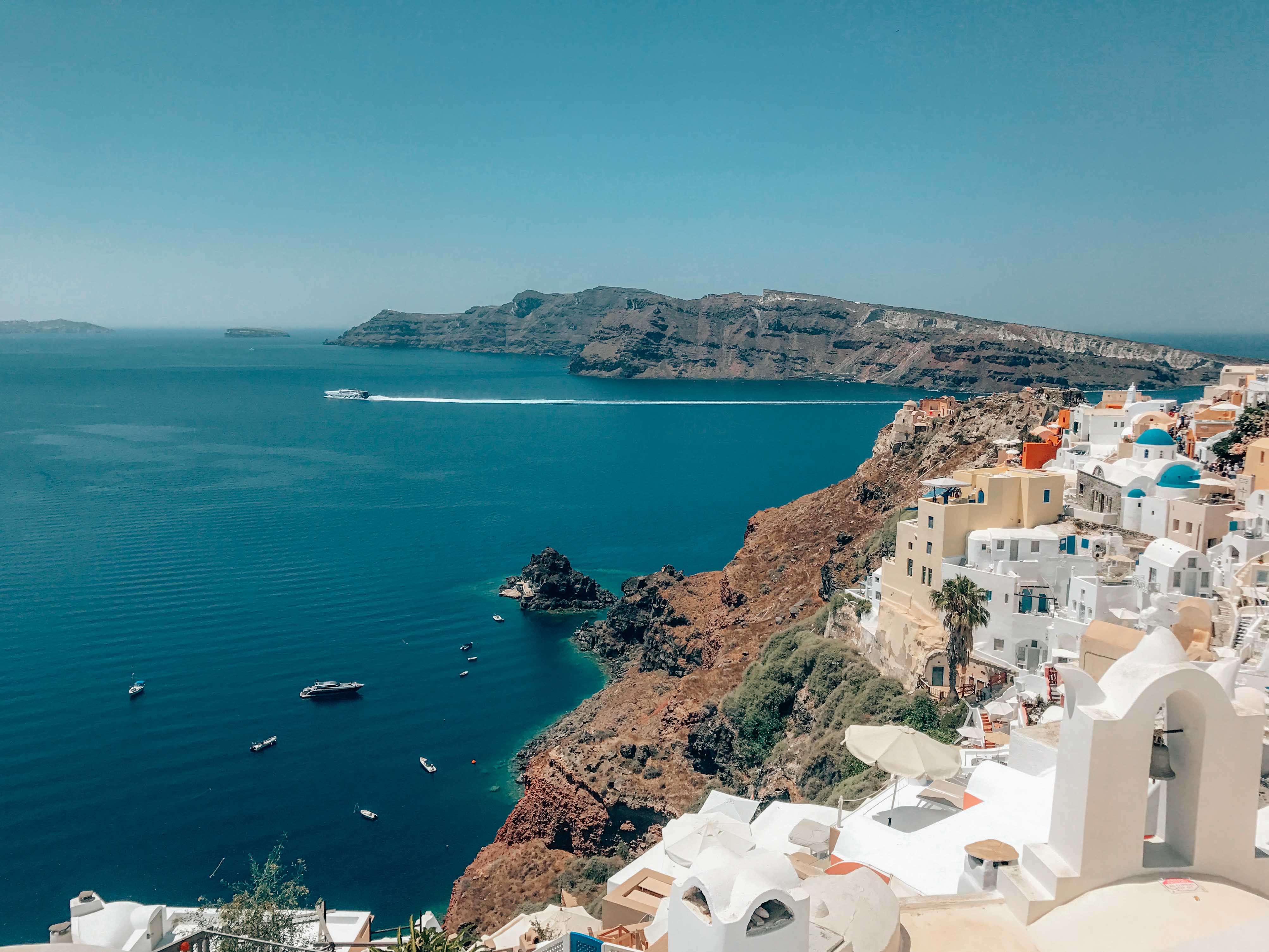 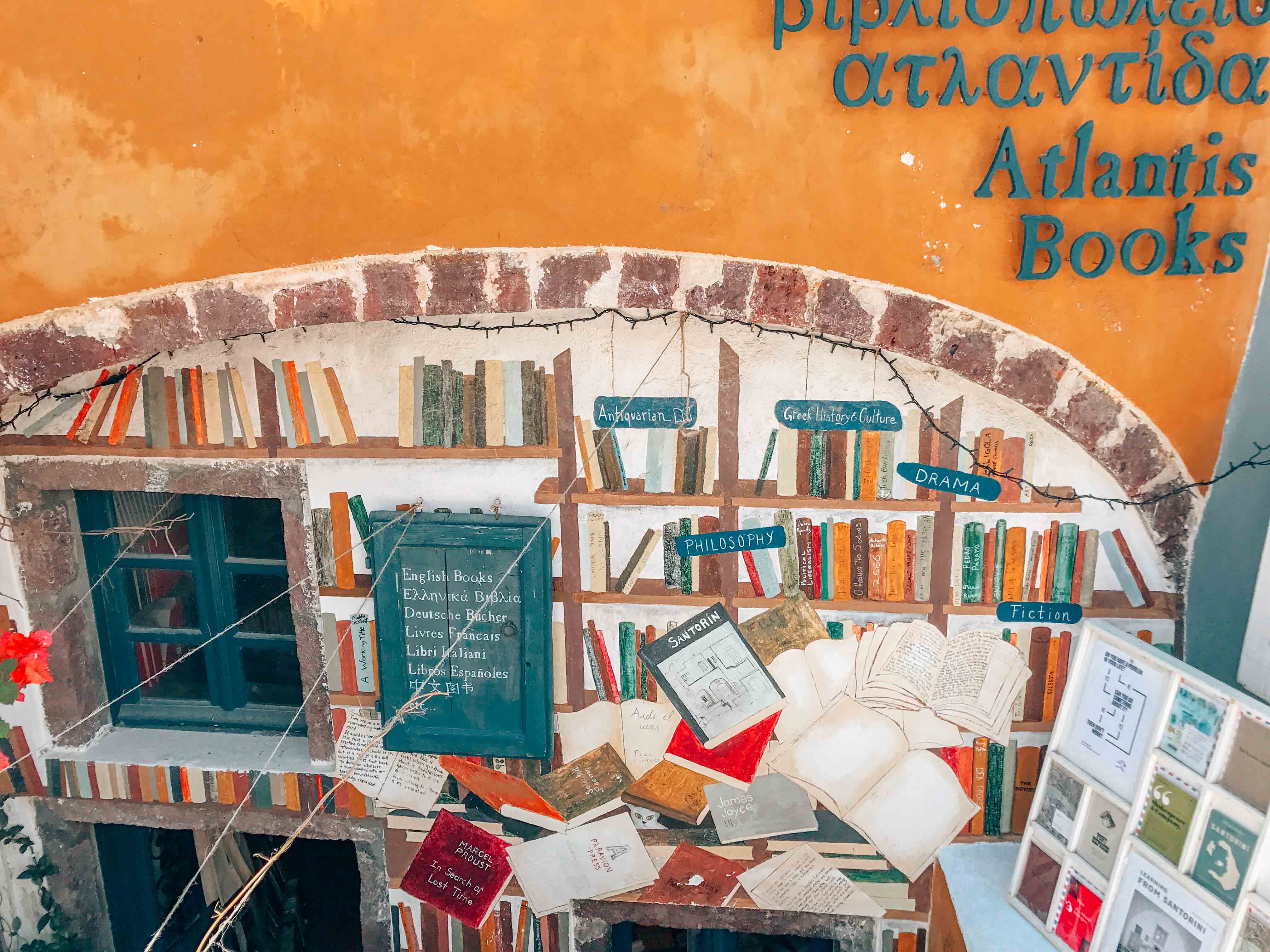 Organize your trip to Santorini
You can book your flights here.


You can find here the Santorini Travel guides

here. and the best excursions and tours here. 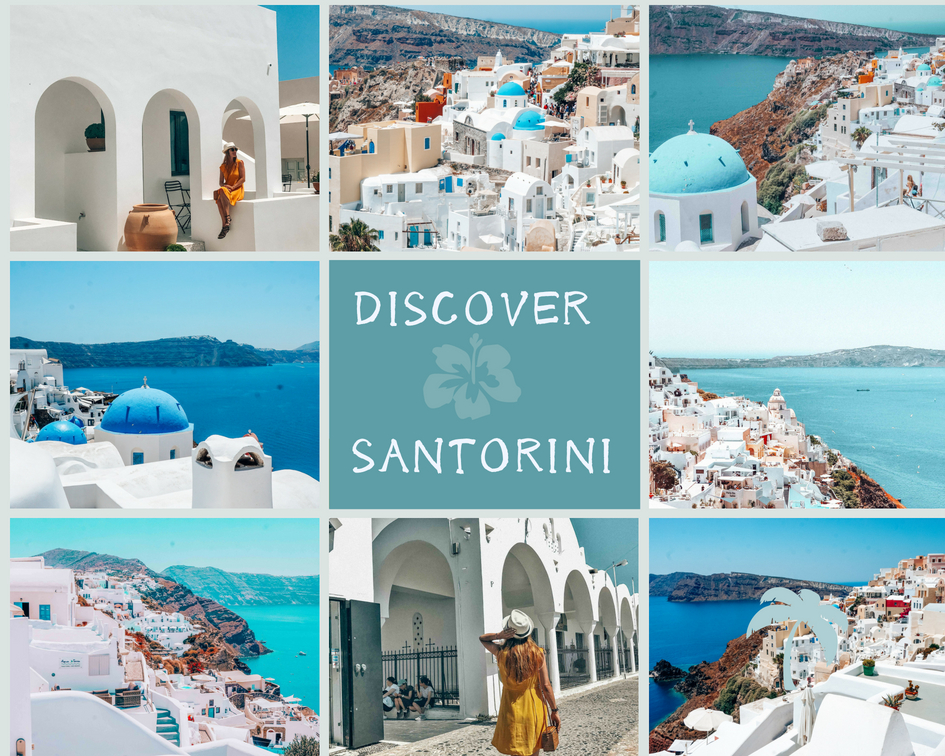 Discover The Best Spa in Spain: Las Caldas in Oviedo

The top 20 things to do in Leeds

The Madison Hotel, the best choice in Hamburg